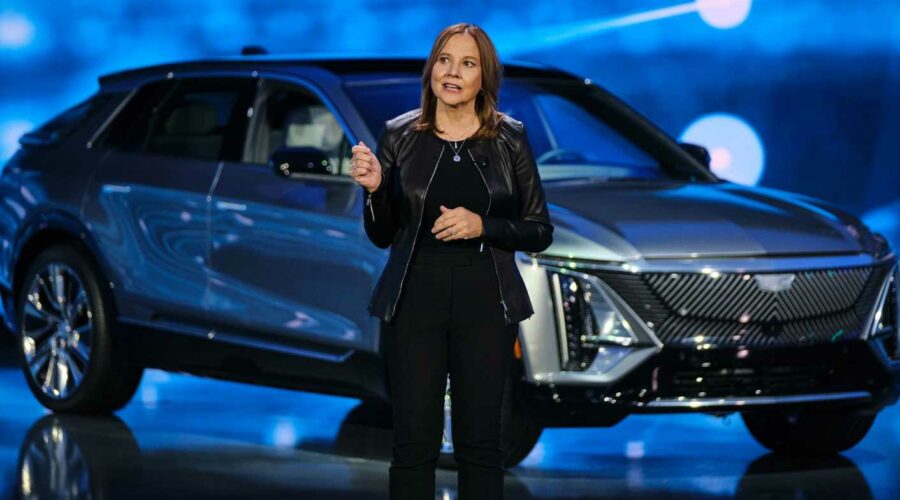 DETROIT — General Motors gave investors a detailed look at its financial operations Wednesday, outlining how the automaker plans to grow profit margins and double its revenue to about $280 billion by the end of this decade.

To accomplish such lofty goals, GM CEO Mary Barra and her executive team plan to transition the traditional automaker to what they're calling a "platform company," leveraging its core businesses of building and selling cars to expand and grow "beyond the vehicle."

"General Motors is delivering the technologies that redefine how people and goods are moved," Barra said Wednesday at GM's tech campus in suburban Detroit during the first day of a two-day investor event. "Our commitment to a vision of a world with zero crashes, zero emissions and zero congestion has placed us ahead of much of the competition."

Investors weren't immediately impressed with GM's announcements during the more than five-hour event. The automaker's stock closed Wednesday down by less than 1% to $53.93 a share. Shares were up Thursday morning by about 2.5% to $55.25 a share.

GM CFO Paul Jacobson said he wasn't worried about the lack of movement in the stock price. He said the company wanted to clearly lay out its plans, some of which may have been lost by investors with the coronavirus pandemic and global semiconductor chip shortage.

"We obviously put a lot on the market today, and I think they will process it, but we're very, very confident," he told reporters during a briefing. "We didn't come out today to move the stock price today, we came out today to really make sure people understand the mindset of what we have here."

Aside from the revenue growth, here are other numbers investors should keep in mind as GM attempts to execute its plans.

Much of the investor day Wednesday was focused on the company expanding its business to generate recurring software- and service-based revenue.

GM is targeting revenue growth of operations such as OnStar as well as new businesses such as its majority-owned self-driving subsidiary Cruise and commercial EV unit BrightDrop from $2 billion to $80 billion by 2030.

Most of that new, incremental revenue is forecast to be during the back half of this decade, GM said.

GM projects EV revenue to grow from about $10 billion in 2023 to approximately $90 billion annually by 2030 as the company launches new models, including at least 30 new electric vehicles by 2025.

GM's annual capital spending, including investments in joint ventures to build battery plants, is expected to be around $9 billion to $10 billion in the medium term as the company transitions to a majority EV product portfolio.

GM said it expects to fully fund these investments through internally generated funds.

As part of GM's move to achieve greater recurring revenue, the automaker plans to offer remote upgrades for its vehicles.

They are expected to range from hands-free driving technologies to increased performance for things such as a "0-60 acceleration software upgrade," according to Alan Wexler, GM senior vice president of innovation and growth.

To increase availability of electric vehicle chargers — a major hurdle to EV ownership — GM plans to invest about $750 million in the devices by 2025. That includes home, workplace and public charging throughout the U.S. and Canada, GM said.

The company last week was granted the fifth of six permits needed to commercialize a self-driving ride-hailing fleet in the state.

Cruise is targeting a fleet of 1 million or more self-driving vehicles by 2030, according to a slide Ammann presented to investors.

"We expect to scale the business rapidly," Ammann said.

Ammann did not specifically discuss the 2030 target, but a Cruise spokesman confirmed "that's where the company believes it can be."

For the first time, GM detailed its previously announced plan to spend $35 billion on electric and autonomous vehicles through 2025.

The plan includes $20 billion in capital and engineering related to electric vehicles, $10 billion in battery and motor production and development, including new plants, and $6 billion in Cruise.

GM said that in 2023 it will release a new hands-free system called "Ultra Cruise" that is capable of driving in 95% of scenarios. The system is expected to be far more capable than its current Super Cruise system, which is exclusively available on premapped divided highways.

09/10/2021 Business Comments Off on From robotaxis to doubling revenue: Here's how GM is laying out its plans for the future
Markets