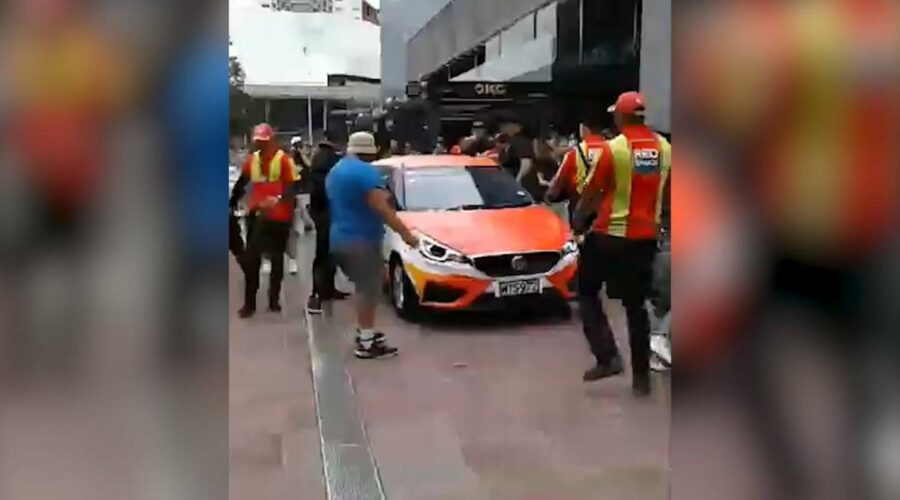 A company that organised the ill-fated $100,000 “money drop” event at Auckland’s Aotea Square has been issued with a formal warning by the Commerce Commission after its inquiry revealed just $3600 in real cash fell from the sky.

The commerce watchdog says Greenback Ecommerce Ltd, trading as The Safety Warehouse (TSW), engaged in conduct that was likely to mislead and likely to have breached the Fair Trading Act.

The PR event in December last year had promised a $100,000 cash drop from the sky – but it turned ugly when attendees realised most of the notes were fake money which could only be used as discount vouchers for the company’s safety products.

The online store, which sells protective wear, had advertised that $100,000 in cash would be given away in a “live cash giveaway”, with the promise that “ACTUAL MONEY will be flying from the sky”.

Some people travelled long distances at personal expense to attend the event, which turned aggressive when attendees realised they had been duped.

Police handled initial complaints about the event but found no evidence of criminal offending before transferring the matter to Commerce Commission investigators for review.

The commission found that 1600 showed up at Auckland’s Aotea Square at midday on December 5 expecting to be part of a cash giveaway but instead got mainly discount vouchers resembling $5 notes.

Thorn, who is also Safety Warehouse managing director, said at the time The Drop had been “unfairly characterised” as an event with fake money.

He maintained that the company stood by their marketing and the vouchers issued, insisting “real funds” were given away alongside the vouchers.

Thorn said the company had “no intent to deprive, mislead or embarrass” anyone.

However, in a statement issued today, the commission said just $3600 in real money fell from the sky.

“In the commission’s view, TSW’s promotion of the event on social media platforms and its website was liable to mislead consumers by creating the impression that $100,000 in cash would be given away at the event, when in fact only a total of $3600 of money was given away.”

TSW encouraged consumers to sign up to attend the free event by promoting “The Drop” using phrases such as, “THE DROP $100K CASH GIVEAWAY”, “We’re dropping $100,000 in value from the sky in Aotea Square at 12pm on Saturday the 5th. Yes, ACTUAL MONEY will be flying from the sky” and “The Drop –100K Live Cash Giveaway –Auckland”.

“The commission spoke to people who went to the event who said they were disappointed to discover that most of what was being given away was vouchers in the form of lookalike $5 notes when, as a result of the advertising they viewed, they were under the impression that $100,000 cash would be given away.”

While the event had likely misled consumers and likely breached the Fair Trading Act, the commission stopped short of prosecuting the company, opting to issue a formal warning letter instead.

Commerce Commission chairwoman Anna Rawlings said businesses had a responsibility to be upfront and clear about what they were offering.

“They must not tell half-truths or provide information that is liable to mislead consumers.

They should think carefully about how consumers will interpret the claims they make and what consumers will likely understand about them – even when it is done as part of a one-off publicity event which is free to attend.”

Rawlings said the commission was satisfied The Drop was a one-off event and TSW has confirmed it did not intend to run this type of event in the future.

If found to have acted unlawfully, the company could have faced a fine of up to $400,000.

Thorn declined to comment over the phone this morning, asking for written questions to be sent.

A worker at the event needed hospital treatment after being struck in the eye with shards of glass as the event turned ugly.

In December, Thorn said some of his staff were bruised and one man who was in the back seat of a car was taken to hospital after an object thrown through the back window scattered glass into his eyes.

Thorn claimed he started the Safety Warehouse business before Covid-19 to supply workwear in Australia and New Zealand, but then moved into masks, hand sanitiser and other personal protective equipment when the pandemic started.

“We did really well through the Covid period supplying the Australia and NZ market and we simply felt like, why don’t we have an event and have a giveaway?”

He said all the “fake money” notes offered discounts for products that people could buy on the Safety Warehouse website.

“Some goods were free – enter a code and it was 100 per cent off. There was a range of things,” he said last year.

Ardern said she could not “fathom how someone would think that was a good idea”.

She said it was likely to have caused a lot of confusion and hurt to people at the event.

It was also revealed fake money from the controversial promotional had been used to dupe a bar into providing free drinks in Hamilton.

Hamilton’s the Outback Inn discovered $20 worth of the lookalike bills in their till count from a Saturday night’s takings after the event.

John Lawrenson, chief executive of the Lawrenson Group, told Newshub they didn’t even notice until the end of the night.

“The manager was counting up the tills and just noticed that some of the $5 notes were slightly different from the others. As it turned out, the money from the cash dump had managed to make its way down to Hamilton and had been used to buy a few drinks.”

Lawrenson said the amount used was relatively immaterial in the grand scheme of things but believes other establishments might have been affected.

“[The $5 notes] are quite similar and I can certainly see how on a dark night in the middle of a busy shift that bartenders would make the mistake that has been made here.”

A Reserve Bank spokesperson said at the time publishing a genuine banknote or coin which could be mistaken for the real thing may breach the law, and anyone presenting a counterfeit note is committing an offence.

Outcry over the ill-fated promotion also led to one disgusted attendee starting an online petition demanding people with vouchers be paid real money.

Levin’s John Murphy called the event a waste of time, and claimed many attendees were from impoverished backgrounds who felt duped.

He initiated a petition last year demanding The Safety Warehouse convert vouchers dispensed at the event into real cash.

“I know people from outside Auckland who got stranded. Many of us including myself suffered injuries,” Murphy told the Herald on Sunday.

“People pushed, shoved and threw themselves over each other in an attempt to get what looked like real money.”

He claimed one person who appeared to be an organiser shared a laughable suggestion that the $5 vouchers could be redeemed for real money at the bank.

A Massey University marketing professor also weighed into the debate, saying the company should apologise, and hire a good public relations company to help salvage its reputation.