LOS ANGELES — A grand jury indicted a former gynecologist at the University of California, Los Angeles on 21 counts of sexual abuse offenses Monday in a case where he is accused of sexually assaulting seven women, court documents say.

Dr. James Heaps faces multiple counts each of sexual battery by fraud, sexual exploitation of a patient and sexual penetration of an unconscious person by fraudulent representation, according to a copy of the indictment, which was unsealed Monday.

The indictment includes offenses that allegedly took place between 2009 and 2018. No new victims were listed in the court documents. He had previously faced 20 counts.

Heaps was taken into custody Monday on $1.19 million bail after the indictment was unsealed, the Los Angeles Times reported. He was arrested in June 2019; his medical license has been suspended by court order as that case moves forward.

Heaps has pleaded not guilty and denied wrongdoing.

“Dr. Heaps is confident he will be exonerated at trial,” Leonard Levine, his attorney, told the Los Angeles Times. He said his client plans to post bail. 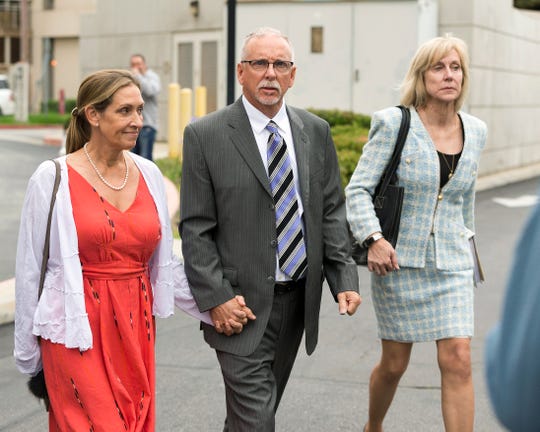 Former UCLA gynecologist Dr. James Heaps, center, his wife Deborah, left, and defense attorney Tracy Green are pictured near the Los Angeles Superior Court on Monday. Heaps faces criminal charges in a case where he is accused of sexually abusing seven women, according to The Los Angeles Times. Heaps was taken into custody Monday on $1.19 million bail after the grand jury's indictment was unsealed, the newspaper reported. (Photo: Damian Dovarganes, AP Images)

Scores of patients have accused Heaps of sexual assault and sexual misconduct between 1983 and 2018, when he worked at the UCLA student health center and UCLA Medical Center. Accusations include making sexually inappropriate comments to patients, touching women sexually during exams without wearing gloves and simulating intercourse, often roughly, with an ultrasound probe.

The University of California system in November agreed to a $73 million settlement in a class-action lawsuit, under which more than 6,600 patients of Heaps could receive a payout, even if they have not accused him of abuse.

More than 100 of Heaps’ former patients have filed individual lawsuits. Last year, Gov. Gavin Newsom approved a measure allowing a one-year window – all of 2021 – for victims to file legal claims against Heaps and UCLA that could otherwise have been too late under an existing statute of limitations.