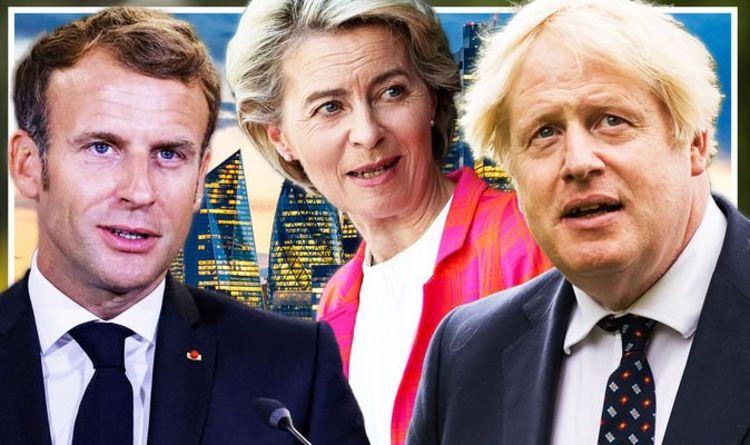 European Union 'is the work of the devil' says commentator

Reports earlier this month highlighted that almost a hundred highly paid bankers left the UK ahead of its formal exit from the EU. The European Banking Authority (EBA) said in its annual survey of bankers earning more than £850,000 that the UK’s total number of highly paid bankers dropped by 95 high earners across 2019. Despite this, the UK remains the country with the lion’s share of wealthy bankers in Europe, accounting for 71 percent of the 4,963 bankers in the top pay category across the bloc in 2019.

London also remains the financial centre of Europe, even though many in France were optimistic Paris could surpass the British capital.

After the UK voted to leave the EU in 2016, Charles Wyplosz, director of the International Centre for Monetary and Banking Studies predicted Paris and Frankfurt would struggle to overtake London.

He argued France and Germany are countries that “have no sympathy for – or understanding of – high finance”, and are places that remained “extremely provincial from a financial point of view”.

Mr Wyplosz added: “I can’t see how they will change themselves given the political and philosophical mood.”

Gerard Mastrallet, head of Paris Europlace, which promotes the city’s financial sector, said after the UK voted Leave: “If we don’t take advantage of this opportunity, other European countries will.”

The Telegraph reported last month that French President Emmanuel Macron has urged CEOs to move their funding to France from the UK.

The newspaper claimed that Mr Macron invited JP Morgan chief Jamie Dimon and Goldman Sachs boss David Solomon to a “Choose France” event at the Palace of Versailles in June.

France’s efforts to win over businesses and convince them to move to Paris has sparked division.

One investment banking source told the Telegraph: “We have to run a business and we do need people to go between London and New York.

“The French are opening their ­country for business. We don’t want to be an exception. We are not trying to be selfish, we are saying all business needs this.”

As London remains the financial heavyweight in Europe, Professor Iain Begg explained in an interview with Express.co.uk in May why the British capital is still the most attractive location for financial services.

He said: “If you are a big multinational based in a European country and you are trying to get financing, London is the place to go because it offers the services you don’t get elsewhere.

“If that becomes a little bit harder then either your cost of getting the capital goes up a bit or you start to look elsewhere, and that may be a stimulus for European financial centres.

DON’T MISS
Brexit fishing row: EU vowed it will ‘be firm’ and back France [INSIGHT]
EU could ‘welcome Catalonia into bloc before Scotland’ [ANALYSIS]
EU warned Poland is ‘clearly on path to Polexit’ [INSIGHT]

“But it’s a bit like a football league – London is in the global Premier League and the European financial centres are in the Championship.”

Recently, the governor of the Bank of England, Andrew Bailey, said he does not expect the EU to open the doors to UK financial services exports after Brexit.

He said: “On equivalence, I think it’s fair to say that nothing really has moved forwards.”

01/09/2021 Business Comments Off on EU’s hopes of ousting London as finance hub shattered: ‘Frankfurt and Paris will struggle’
Markets