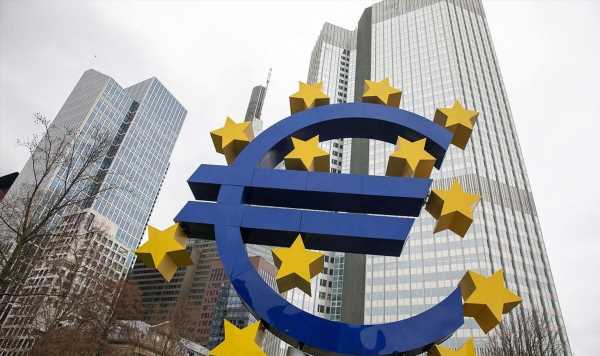 Greece should not have joined the Eurozone says Portillo

The euro is now trading at 1.05 to the dollar, having fallen steadily from 1.12 at the start of the conflict. EU growth is in doubt as Putin’s conflict with Ukraine disrupts oil and gas supplies and has sparked a spike in commodity prices, adding to already growing inflation. Energy security fears were thrust to the fore this week as Moscow vowed to axe gas supplies to Poland and Bulgaria after they refused to pay in rubles. Matthew Ryan, Senior Market Analyst at Ebury, described these factors as producing “one of the most violent sell-offs in risk that we’ve seen in some time” with European currencies being the worst performers.

Mr Ryan added: “Not only does Russia’s energy ban present a risk to the Eastern European region, but to Europe as a whole.

“Germany’s economy ministry said on Wednesday that it was revising lower its 2022 growth forecast to 2.2 percent from 3.6 percent, which heaped further downward pressure on the euro.

“Comments from ECB member Kazaks that the bank could raise rates three times this year, including at the July meeting, helped put a bit of a temporary floor under the euro, although further downside is likely so long as market sentiment remains fragile.”

Raising interest rates in July would be a marked shift in the European Central Bank’s (ECB) stance which has so far lagged behind the Bank of England and US Federal Reserve.

While the Bank of England became the first to hike rates in December last year, the ECB has shied away with President Christine Lagarde frequently suggesting inflation would prove temporary.

This week Ms Lagarde described European inflation as “a different beast” to that in the US.

In comments to CBS she explained: “If I raise interest rates today, it is not going to bring the price of energy down.”

Even with markets beginning to price in a tightening of policy the ECB is still expected to tread carefully though given the risks to growth.

Ali Jaffari, Head of North American Capital Markets at Validus Risk Management, said: “The ECB’s delay in curbing inflation widens its monetary divergence with other central banks and continues to weigh on the euro.”

“With significant uncertainty and rising stagflation risks on the horizon, the challenges for the euro remain clear.”

The divergence with other central banks has become clear with the Federal Reserve and the resulting impact on the dollar.

The US central bank has already hiked rates once this year and is expected to begin an aggressive cycle of hikes with predictions of a 0.5 percent increase in May.

Athanasios Vamvakidis, Head of Foreign Exchange Strategy at Bank of America, told the Financial Times: “The market is convinced that the Fed will be more aggressive than the ECB under pretty much any scenario.”

He added: “It’s maybe early to talk about (euro) parity (with the dollar), but if we think about what else could go wrong for the euro, then I think with sanctions on Russian energy we could indeed get there.”

While Russian exposed European economies are on the frontline, the US has far less direct exposure and the dollar has so far retained its status as a safe haven currency.

The dollar has also been gaining against the pound with sterling not trading at 1.25 dollars, down from 1.34 at the start of the conflict.