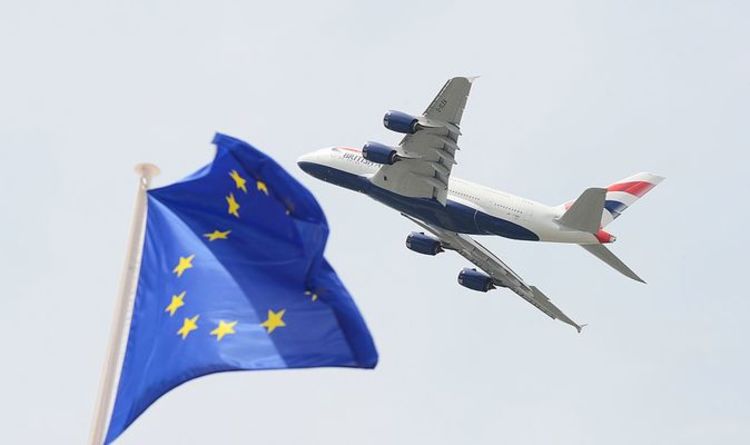 Brexit: Vicky Pryce warns ‘we have to follow EU regulations’

Under EU rules airlines operating flights between countries in the bloc have to be majority owned by shareholders based in member states. While the rules were temporarily suspended after Brexit fears are growing that countries such as Germany and France could push for them to be re-applied. Andrew Lobbenberg, an analyst at HSBC, told The Telegraph: “National interests are ever present in the airline industry, which is often the home for mercantilist policy making. The commercial interests of Air France-KLM and Lufthansa would unquestionably be supported by adding new strategic challenges to IAG.”

It is thought meanwhile Spain, Ireland and Hungary would be more likely to push for rules to be relaxed.

The issue over restrictions on non-EU shareholders has proved a major issue for airlines and was a factor in Ryanair previously deciding to delist from the London Stock Exchange.

The view is also shared by the UK Government with the Department for Transport calling them “outdated” and not reflecting “the reality of the global capital markets.”

A spokesperson for IAG said: “We comply with the EU ownership and control regulation.

“As stated in December 2020, our EU airlines’ remedial plans were approved by the national regulators in Spain and Ireland who confirmed that they comply with the EU ownership and control rules.

“In addition, the composition of the IAG Board has been changed so that it has a majority of independent EU non-executive directors.”

However Mr Lobbenberg disagreed that IAG’s board structure would satisfy the regulations.

He explained: “We think that through 2021 the EU has simply suspended disbelief on this matter as negotiations were ongoing between the EU and UK.”

IAG’s largest shareholder is understood to be Qatar which holds around 25 percent of the company’s stock.

Under the EU rules no more than 49 percent of the airline’s stock can be held outside of the bloc.

The EU has also recently triggered frustration from airlines over exemptions on carbon taxes to long haul flights.

Budget airlines easyJet, Ryanair, Jet2 and Wizz Air have all called on Brussels to extend the legislation to apply evenly.

EasyJet CEO Johan Lindgren said: “Aviation needs to do more to tackle climate change, which is why we are championing zero emission technology.

“But this means that the whole industry has to play its part, this includes long haul airlines which is why we cannot allow exemptions to new EU regulations.”

10/02/2022 Business Comments Off on EU comes for British Airways! Rules could see break up after ‘French and German’ demands
Markets