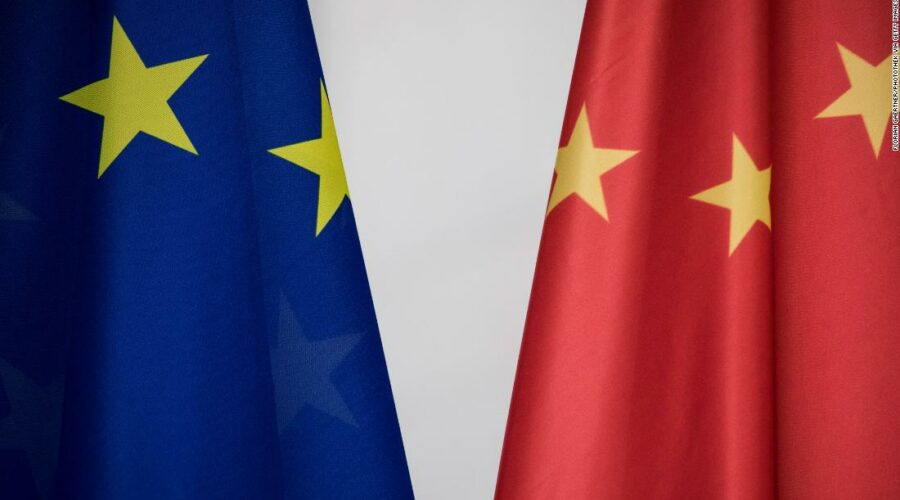 London (CNN)The European Union has long been criticized for trying to have its cake and eat it when it comes to China. On one hand, it badly wants a strong economic relationship with its biggest partner for goods trade. On the other, it recognizes the Chinese government is a serial human rights offender and systemic rival.

This attempt to balance contradictory realities has often led to policy incoherence from Brussels. It was only this time last year that the EU and China finalized a major investment agreement to strengthen their trade ties.
It included a number of commitments derided by critics as superficial on issues such as climate change, despite China being the world’s largest greenhouse gas emitter; and labor rights, despite European lawmakers passing a resolution just weeks before the agreement was finalized condemning Beijing’s alleged system of forced labor for Uyghur Muslims in its western Xinjiang region. 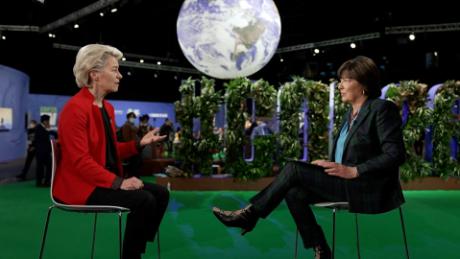 EU chief: China needs to ‘step up’ and show us what they can do on climate

Fast forward 12 months, and the European Parliament will not even consider voting on the agreement. In March, the EU alongside other allied nations levied sanctions on several Chinese Communist Party officials over “serious human rights abuses” against Uyghur Muslims, prompting China to sanction several European lawmakers in retaliation. China has denied claims of atrocities in Xinjiang, but with neither side willing to budge, the pact is on ice.

Now, a more coherent European strategy is coming into focus, through a series of policies that have the clear ambition of countering China, regardless of what it could mean for investment in Europe. 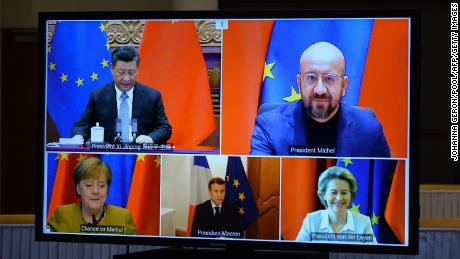 Last week, the European Commission unveiled a plan called the “Global Gateway,” to invest €300 billion ($340 billion) globally by 2027 on infrastructure projects, digital connectivity and curbing climate change.
While the plan does not mention China, it’s hard to see this announcement as anything other than a direct alternative to Beijing’s Belt and Road Initiative (BRI), a wide-ranging trade and infrastructure project that would link economies from Jakarta to Rotterdam via Nairobi. Commission President Ursula von der Leyen said the gateway offered a “true alternative” to China’s BRI, which has been accused of saddling some countries with huge debts since its inception in 2013.
The BRI was once seen by some in Europe as a way of pouring money into the continent while modernizing its infrastructure, but Beijing’s authoritarian turn at home and hostile foreign policy abroad in recent years has led to a radical rethink on whether having state-backed Chinese companies holding major stakes in critical infrastructure — or allowing European countries to be in debt to China — is the best place for Brussels to be. 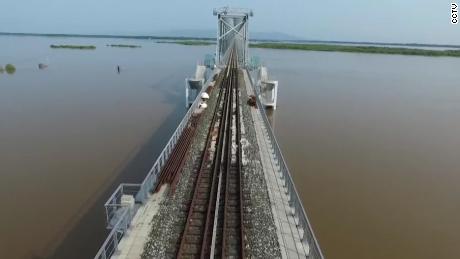 The China-Russia Tongjiang-Nizhneleninskoye Bridge is part of China’s “Belt and Road” initiative, a push to create trade corridors linking China to Africa and Eurasia.

The Global Gateway comes hot on the heels of an EU proposal to bolster its military capabilities independently of NATO and the “Indo-Pacific Strategy,” a plan to bolster European influence in the geographical area in which China wields significant power.
There’s little doubt that these tougher policies will annoy Beijing. “China likes Europe when it’s sitting on the fence,” says Theresa Fallon, director at the Centre for Russia, Europe and Asia Studies. “They liked it when Europe wanted a bit more autonomy from America and a closer relationship with China was part of that. Now, the idea of Europeans attending [US President] Joe Biden’s democracy summit, which will point the finger at China, is a lot less comfortable.”
The EU’s newfound assertiveness didn’t come about suddenly, rather it was the culmination of several years of changing attitudes. In 2019, the European Commission published a document in which it labeled China a “strategic rival.” In the two years that followed, Europe has slowly worked out how it deals with a rival with whom it has so many ties and which it still wants to partner with in other areas. 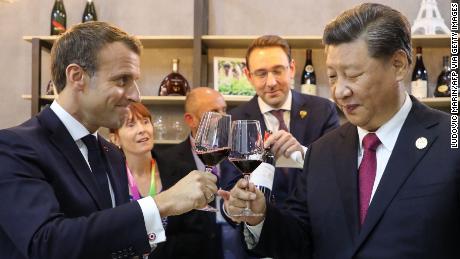 Charles Parton, former first counsellor to the EU delegation in Beijing, thinks Brussels’ previous inaction largely came down to the fact that for a time, Europe’s leaders could get away with doing nothing.
“The reality was, citizens were not putting huge pressure on politicians to do anything. Persecution of the Uyghurs or crackdowns in Hong Kong. When Europeans met with Xi Jinping, they would say they brought up human rights, everyone would nod, then they would get down to business,” he said.
But pressure has been steadily building on European leaders to hold China accountable. And while anti-China sentiment has been rising across the West for years, the ruling Communist Party’s handling of the initial stages of the Covid-19 pandemic has also led to a record high in negative views toward the country, according to Pew.
“Rightly or wrongly, a lot of Western politicians have painted China as being responsible for what’s happened. And Beijing hasn’t helped this perception by pushing disinformation about Covid. Now, politicians and citizens are more susceptible to see China for what it really is,” Parton said.
Historically, it has also been hard for the EU’s member states and institutions to agree a common policy on China. Further complicating the matter: China is the largest trading partner of the EU’s wealthiest and arguably most powerful member state, Germany. German diplomats have historically played down tensions with China and on the matter of economics, German ministers are listened to carefully by everyone in Brussels and will often set an agenda that is followed by other member states.
“Because EU foreign policy requires unanimity, you are forced to move at the pace of the slowest member state,” says Ian Bond, director of foreign policy at the Centre for European Reform. “China has successfully dangled carrots in front of member states who have happily grabbed those carrots.”
Bond also notes that former US President Donald Trump’s unpopularity in Europe, combined with his outright hostility to China, encouraged the EU to work more closely with Beijing at a time Europe was actively seeking a foreign policy independent of America.
“Sometimes, when the wrong person is saying the right things, it can have the opposite of the intended effect. I think initially Europe saw working with China as an opportunity, in light of the instability in the US. By 2019, they realized this was an error,” Bond says. 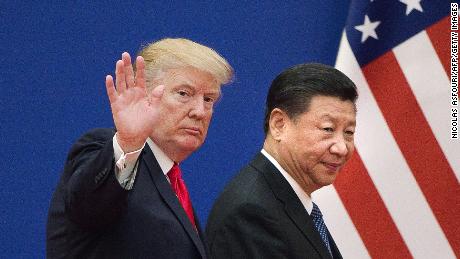 Today, things are different. The G7 nations are all more hostile to China, something that Fallon believes “embarrassed” EU representatives at the last summit. “It was clear everyone else had moved onto seeing China as a serious threat and the EU suddenly looked very complacent on the issue,” she says.
The Commission, which in recent years had taken a cooler line on the US-EU relationship, is now visibly trying to hug Washington tight. “America will always be an important partner to the EU. It is a like-minded country, and we have alliances on almost every single issue,” an official told CNN this week.
Parton also believes more and more European leaders have realized Beijing’s bark is worse than its bite, pointing out that countries which have been in the doghouse for hosting Tibetan Buddhist leader the Dalai Lama — who is considered a “separatist” by Beijing — didn’t suffer as badly as feared, with China’s response being more muted than its threats.
Another major red line that Europe seems increasingly comfortable crossing is cosying up to self-ruled Taiwan. Mainland China and Taiwan have been governed separately since the end of the Chinese civil war more than 70 years ago. Taiwan is now a flourishing multi-party democracy, but the mainland’s ruling Chinese Communist Party continues to view the island as an inseparable part of its territory — despite having never controlled it.
While a Commission official told CNN that Brussels’ official policy is still “One China” — loosely described as support for the status quo — the EU sees Taiwan as an attractive partner that it expects to work more closely with — at the same time tensions between Taipei and Beijing are rising.
In October, the European Parliament adopted a wide-ranging blueprint intended to enhance relations with Taiwan. This was followed by the arrival of a seven-member European Parliament delegation to Taipei in November. Several member states have also made clear they support Taiwan, with Lithuania hosting a de facto embassy and Baltic lawmakers taking a trip to the island. One Lithuanian lawmaker said there is “wide support” in his country for closer relations with Taiwan.
Further to this, Parton says the pandemic’s toll on China’s economy and increasing economic headwinds means it will be even less able to use money as a weapon in the coming years. 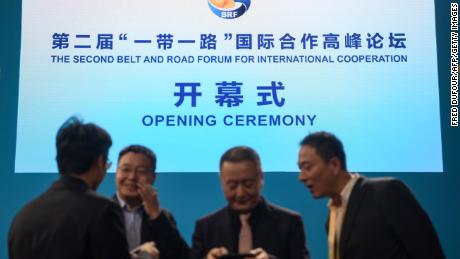 There’s no denying that the recent proposals and stances from Brussels are ambitious and will be received badly in Beijing. The question is what happens now?
As Bond notes, any major foreign policy requires unanimity among the member states and China has done a good job turning the heads of certain leaders — most notably Hungary’s Viktor Orban, whose plans to build an overseas branch of a Chinese university in the Hungarian capital of Budapest sparked protest over the summer. The government has since said it would hold a referendum on whether to go through with the university plan.
However, the change in public opinion toward China is filtering through to Europe’s leadership. Fallon believes that in countries which have historically been in favor of economic partnerships with China like France and Hungary — which both have elections soon — political opposition will be able to leverage public hostility.
The danger isn’t that there won’t be a coherent China strategy, but that a plan gets watered down so much it isn’t worth the paper it’s written on.
In the case of the Global Gateway, that could be private sector companies not keen to fund huge infrastructure projects that don’t make money. On security, it might be that countries in southern Europe enjoy Chinese money and don’t geographically see it as a threat.

For now, China hawks are happy that Brussels is attempting to stop trampling over its lofty ambitions of promoting democracy, human rights, and free trade, blinded by the Chinese yuan signs in their eyes.
What remains to be seen is whether the EU’s own red tape and processes suffocate that ambition, and if once the pandemic begins to recede, Europe returns to its former bad habit of turning a blind eye, even when doing so hurts its own long-term interests.
Source: Read Full Article

11/12/2021 Business Comments Off on EU chief: China needs to 'step up' and show us what they can do on climate
Markets