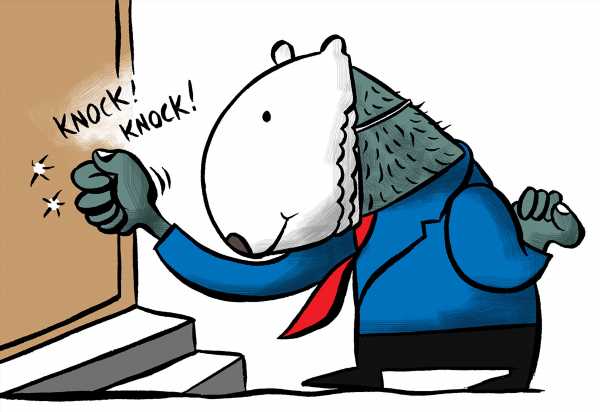 It may be a ‘no-go’ for banking licences to large industrial houses.

The Reserve Bank of India may not be in favour of issuing banking licences to large industrial houses as suggested by an internal working group in November last year, and the regulator is expected to make its stance clear when it releases its final report soon.

“The status quo may be expected to continue,” said a top source.

The central bank may also not substantially move from its stated position that ‘a non-banking financial company (NBFC) which is part of a group that has total assets of Rs 5,000 crore or more, and that the non-financial business of the group accounts for 40 per cent or more in terms of total assets and in terms of gross income, is not eligible’, it is learnt.

Simply put, an NBFC that is part of an industrial house must have a greater footprint in the financial services business.

The RBI, however, may be willing to grandfather regulations for entities that pass its muster on reserve requirements — cash reserve ratio and statutory liquidity ratio — and on priority sector targets.

This, it was pointed out, could be a major departure, as no such leeway was granted in the case of the ICICI Ltd-ICICI Bank reverse merger, or when IDFC Ltd converted into IDFC First Bank.

An exception was made in the case of the IDBI Ltd-IDBI Bank reverse merger, though.

Large industrial houses’ hopes of being awarded banking licences had soared after the IWG was set up to review the extant ownership guidelines and corporate structure for private banks.

The report, which was submitted on November 20, 2020, had weighed the pros and cons of issuing banking licences to industrial houses.

The RBI’s final report is expected to have more details of an operational nature, but from a policy stance, it may be a ‘no-go’ as far as issuing banking licences to large industrial houses is concerned.

Another source pointed out that “the IWG had touched upon several other aspects of the extant regulatory framework for private banks, and issuing licences was only part that got highlighted”.

One of the triggers for setting up the IWG was ‘heightened expectations for the banking sector to scale up for a greater play in the global financial system’ amid the $5 trillion target for the Indian economy.

It was in this context that, in order to leverage these developments for engendering competition through the entry of new players, that the RBI initiated the process for a comprehensive review of the extant guidelines on licensing and ownership for private banks. 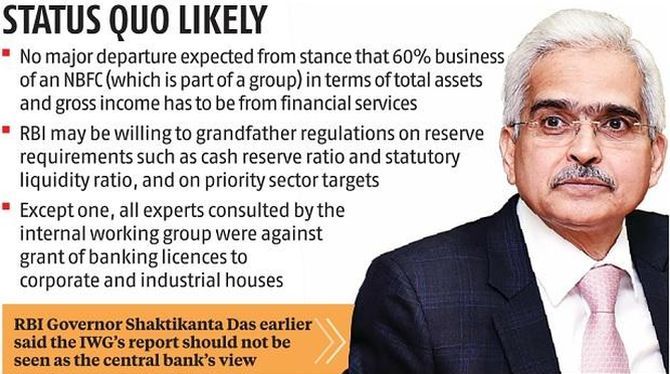 The IWG’s report had led to past central bank governors and deputy governors voicing their concerns on the issuance of banking licences to the big boys of India Inc.

On his part, Governor Shaktikanta Das was categorical that the IWG’s report should not be seen as being the central bank’s point of view.

‘The IWG has two external members, who are also members of the RBI central board, and the IWG has acted independently. They have had their independent deliberations. They have given a certain point of view,’ Das stated on December 3, 2020.

Large corporate houses in the country have been seeking to foray into the banking sector ever since a liberalised licensing policy came into being in 1993.

The IWG had interacted with serving and retired deputy governors of the RBI, bankers, legal experts, and other professionals for their insights on the subject.

And except one, nobody was in favour of corporate and industrial houses being allowed to promote a bank.

The view was that the prevailing corporate governance culture in corporate houses is not up to international standards, and it will be difficult to ring-fence the non-financial activities of promoters with those of the bank.

Any stress in the non-financial business may spill over into the bank.

Besides, assessing the ‘fit-and-proper’ status of promoters and the large number of group entities will be very difficult, many felt.

It was also widely held that as far as fulfilling the need of capital is concerned, “it is not difficult to attract capital from sources other than corporate houses, for well-governed banks”.

And that there is also a need to significantly scale up regulatory and supervision capacity before permitting corporate and industrial houses to promote banks.

What is also playing in the background is large industrial conglomerates’ compliance with the RBI’s guidelines on core investment companies (CICs).

This was anyway to receive closer scrutiny ahead of the grant of banking licences.

The banking regulator’s August 13, 2020, circular had said the number of layers of CICs within a group (including the parent CIC) is to be restricted to two — irrespective of direct or indirect holding — and the rule has to be adhered to by the end of March 2023.

It was pointed out that the equity holding structure in banks is straightforward.

In the case of NBFCs, it’s not so.

“You can’t have a situation wherein banks start mirroring NBFCs on this front,” said a source, adding, “The need to disentangle the ownership labyrinth to understand both leverage and cross-ownership is important.”

It was also mentioned that the grant of banking licences will hinge on what the RBI’s onsite inspection of CICs throws up.

In effect, the non-operative financial holding company that is to sit atop the bank will have to be ring-fenced from unrelated encumbrances before a licence is granted.

CICs within conglomerates set up over decades have linkages with their own entities and joint ventures (domestic and overseas), and it may be some time before these are unwound.

The said August circular also did away with the definition of systemically important CICs (non-deposit taking) and with ‘exempted CICs’, which, the RBI observed, provided unintended credibility to such firms.