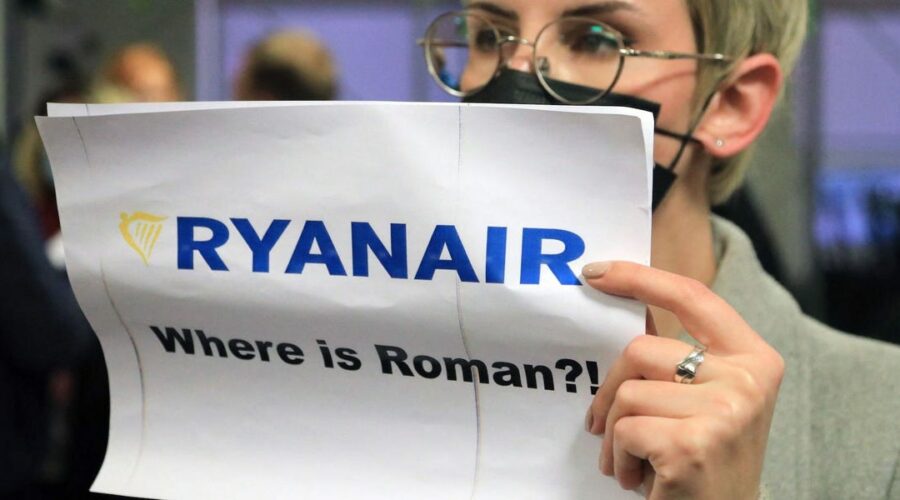 On Sunday, the Belarusian government diverted Ryanair flight 4978 as it passed through Belarus’ airspace en route from Athens to Vilnius, Lithuania. They forced the plane to land in Minsk, where they detained passenger Roman Protasevich, a Belarusian journalist wanted by the country’s repressive government for his involvement in anti-government protests over last year’s stolen presidential election.

After seven hours on the ground in Minsk, the Ryanair plane was allowed proceed to Lithuania, with most of its passengers.

Ryanair’s initial statement about the hijacking was limp.

“We sincerely apologise to all affected passengers for this regrettable delay, which was outside Ryanair’s control,” the airline said. Of course, for Protasevich, the delay is likely to be considerably longer than for most of the flight’s other passengers. The initial Ryanair statement didn’t even acknowledge that at least one of its customers continues to be detained in Belarus.

The airline explained that its crew was “notified by Belarus ATC of a potential security threat on board” (this notification was pretextual) and was “instructed to divert to the nearest airport, Minsk” (this part of the statement is clearly false since at the time of the diversion, the plane was closer to its intended destination of Vilnius than to Minsk). The airline also said the aircraft was eventually “cleared to depart together with passengers and crew,” failing to note this was not true of all passengers.

Later, the airline issued another, even briefer written statement calling the diversion of the plane “an act of aviation piracy” by the government of Belarus, though still not acknowledging the arrest of Protasevich. The airline says it “cannot comment further for security reasons,” though it’s hard to see why security concerns would prevent it from stating facts already widely reported in the press, such as Protasevich’s detention. Indeed, on Monday, Michael O’Leary, Ryanair’s CEO, said in an interview that the intent of the stop was to “remove a journalist.”

Among other things, this is bad customer service

One of Ryanair’s signatures is its insult-comic approach to customer service. The idea, I suppose, is that ostentatiously bad treatment of customers only serves to highlight how focused the airline is on keeping fares low.

A decade ago, the airline made headlines when its CEO insisted it was seriously considering charging passengers to use the bathroom, claiming it was hampered in doing this only by the difficulty of collecting payments (there’s no way to make the lavatory door coin-operated).

In that context, Ryanair’s decision to continue flying over Belarus even after the incident — the airline says it’s waiting for authorities to tell it whether to stop flying over the country, as a Ryanair flight from Cyprus to Estonia did just this morning — makes some sense. After all, it’s unlikely that any given flight passing over Belarus contains a passenger whom the Belarusian government would like to make into a political prisoner, and flying a longer route would add fuel cost.

And the airline’s muted response to the unjust arrest of one of its passengers? It’s right in line with Ryanair’s overall ethos that your problems are your problems.

We should expect companies to have values

When companies make commitments of values that go beyond profits, that helps build trust with customers (and employees), since they don’t have to wonder whether the company’s commitment to serving their interests extends to a particular situation. “We take safety seriously because being unsafe is bad for shareholder value in the long run” might well be a true statement for an airline to make, but “we take safety seriously because we care about our customers and our employees” is simpler and more reassuring.

As air travel blogger Ben Schlappig notes, one of Ryanair’s low-cost competitors, Hungary-based WizzAir, did make a point of avoiding Belarusian airspace today. Taking a security precaution that entails some cost, even against an outcome that is pretty unlikely, helps demonstrate to customers that protecting their safety is a priority.

Capitalism is good because for-profit business enterprises are incentivized to create valuable goods and services and raise the standard of living. But it’s not perfect, and a pure profit motive can lead corporations to behave in amoral ways. That’s why it’s good to have a stakeholder model where corporations face expectations — enforced by customers, workers and governments — to take into consideration a variety of concerns besides profit maximization.

In recent years, there’s been an asymmetry in which authoritarian countries like China lean heavily on multinational corporations to serve their political goals, for example by suppressing content critical of the communist Chinese regime. Liberal countries in the west, with a traditionally hands-off approach to the values expressed in the corporate sector, have not pushed back on these efforts effectively — either at the consumer or the government level. There is no symmetrical demand that western corporations should stand up for western values, and as a result, many companies — seeing no money to be made in standing up for freedom — don’t.

The hijacking of an Irish jet flying from Greece to Lithuania in service of the repression of the press in undemocratic Belarus is an extreme example of foreign interests pushing our corporations around, and it requires pushback from European governments and also European air travelers.

Ryanair should be expected to be on Team Europe — it should be visibly angry, and it sure as hell shouldn’t be flying over Belarus anymore — and it should be afraid that it will lose money through unfavorable regulatory action and unfavorable customer response if it isn’t.