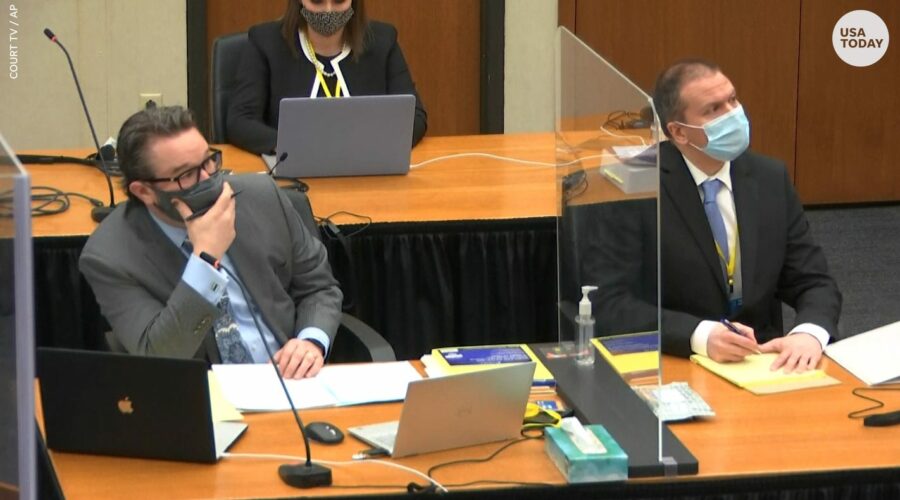 MINNEAPOLIS — Jurors were expected to hear more testimony Wednesday from witnesses for the defense in the murder trial of former Minneapolis police officer Derek Chauvin, charged in the death of George Floyd.

The defense called its first six witnesses to the stand Tuesday after the prosecution rested its case. The last witness of the day, defense use-of-force expert Barry Brodd, told jurors Chauvin was “justified” in his use of force – the first witness to suggest the restraint on Floyd was acceptable.

“I felt that Officer Chauvin’s interactions with Mr. Floyd were following his training, following current practices in policing, and objectively reasonable,” Brodd said.

At the end of the day Tuesday, Hennepin County Judge Peter Cahill called attorneys into his chambers to discuss “an issue related to security.”

Minneapolis has seen several nights of unrest following the fatal police shooting of Daunte Wright in nearby Brooklyn Center. On Tuesday, Minneapolis Mayor Jacob Frey announced the city would be under curfew, and the police officer who fatally shot Wright and the city’s police chief resigned.

Where the trial stands: The defense argues Floyd’s hypertensive heart disease and ingestion of meth and fentanyl, together with the struggle with police, led him to suffer from heart strain and ultimately die. On Tuesday, the defense called on a former police officer and a retired Hennepin County paramedic who both testified about Floyd’s drug-related arrest in 2019 in Minneapolis.

An officer with the Minneapolis Park Police on the scene that day also told jurors bystanders were “very aggressive” toward the officers – an point lead defense attorney Eric Nelson has been making for weeks to argue officers were threatened and distracted by the crowd.

Prosecutors, meanwhile, contend Floyd died due to Chauvin’s knee on his neck for more than nine minutes. Over the course of 11 days, prosecutors called 38 witnesses to the stand and played dozens of bystander, surveillance and police body-cam videos.

After facing several prosecution witnesses who testified about police use of force in Floyd’s death, the defense called Brodd, a police-use-of-force expert, to provide a counterpoint for the jury.

“I felt that Derek Chauvin was justified, acting with reasonableness,” he said.

Brodd said the level of force the officers used when they tried to put Floyd into the back of the police patrol car  and to force Floyd onto the ground was “objectively reasonable,” though he added: “I don’t consider a prone control as a use of force.”

During cross-examination, prosecutor Steve Schleicher’s questioning enabled the prosecution to re-play, yet again, audio and video of Floyd struggling and saying he could not breathe. Brodd acknowledged that Floyd’s cries “could” mean he faced a potential threat of positional asphyxia. Read more on Brodd’s testimony here.

The family of George Floyd and their attorneys stood outside the courthouse Tuesday afternoon alongside the family of Daunte Wright. Police fatally shot Wright, a 20-year-old Black man, in nearby Brooklyn Center during a traffic stop Sunday in what the police chief called an “accidental discharge.”

“It is unbelievable — it is just something I cannot fathom that in Minneapolis, Minnesota, a suburb 10 miles from where the Chauvin trial regarding George Floyd was taking place, that a police officer would shoot and kill another unarmed Black man,” civil rights attorney Ben Crump said.

Brandon Williams, George Floyd’s nephew, sent his condolences to the Wright family. “We’ve been in a similar situation,” he said. “To the world, I just simply say: Damn, again? And when I say damn, again, I mean another Black man or woman killed at the hands of police using excessive force.”

Williams called on officers “to be held accountable, charged and convicted.”

“In the middle of the Derek Chauvin trial for murdering my uncle George Floyd, in snow and freezing weather conditions, we came to stand with this family,” he said. “It’s unacceptable. When is enough enough?”

The first week of witness testimony in the trial of Derek Chauvin, ended with a veteran Minneapolis police officer who explained the training officers receive. (Photo: COURT TV)