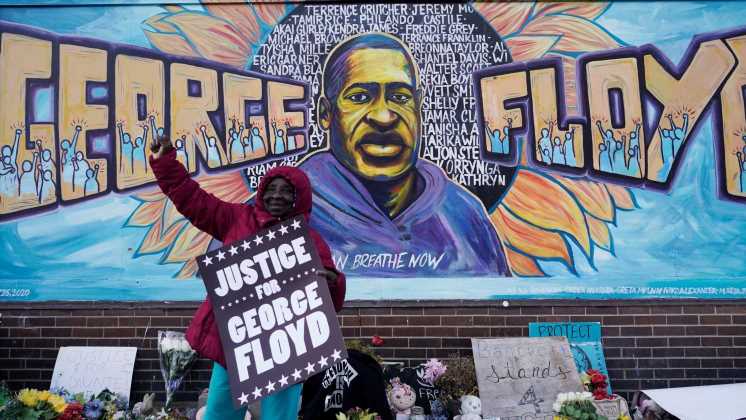 More than a year after George Floyd took his last breath, the ex-cop who murdered him will face a Minnesota judge and receive a sentence of up to 30 years in prison.

Derek Chauvin, a former Minneapolis police officer, has sat in a maximum-security prison cell since a jury found him guilty of second- and third-degree murder and second-degree manslaughter on April 20. Chauvin, who has never expressed remorse for Floyd’s death, will have the opportunity to speak for the first time at the hearing.

Though he’s a first-time offender, Hennepin County District Judge Peter Cahill has found that Chauvin should face a higher sentence because his crimes involved abusing his position of trust and authority, and killing Floyd in the presence of children, among other aggravating factors.

Chauvin’s defense attorney Eric Nelson has asked for probation or far less prison time. But the prosecution has argued that Chauvin deserves the maximum penalty for actions that “traumatized Mr. Floyd’s family, the bystanders who watched Mr. Floyd die, and the community. And his conduct shocked the Nation’s conscience.”

Legal observers expect Chauvin will receive a substantial prison time that’s near or at the 30 year maximum. But Cahill has “pretty wide latitude in determining what sentence to impose” and both parties are going to try to convince the judge to “exercise his discretion in their favor,” said Ted Sampsell-Jones, a professor at Mitchell Hamline School of Law.

Meet Peter Cahill: The judge in the Chauvin case is orchestrating one of the nation’s most widely watched murder trials

Whatever the sentence, per Minnesota law, Chauvin will serve two-thirds of it behind bars and the remainder under a type of supervised release that’s similar to parole. Chauvin, 45, will also get credit for time served in prison while awaiting sentencing.

Floyd, 46, was killed in May 2020 after officers responded to a report that he had used a counterfeit $20 bill. Floyd was handcuffed, face-down on the street and repeatedly yelled, “I can’t breathe,” as Chauvin pressed a knee to his neck for 9 1/2 minutes.

Even after Floyd had no pulse, Chauvin remained in position until a paramedic waved him away so that he could load Floyd onto a gurney. Floyd was never revived.

His death spurred a year of sometimes violent protests across the country and a national reckoning around systemic racism and police brutality.

Three other officers involved in the incident face charges of aiding and abetting Floyd’s murder; crimes that carry the same penalties. They are scheduled to be tried next year in Minnesota.

All four officers have also been charged in federal court with violating Floyd’s civil rights during the arrest. Chauvin made his first court appearance in that case earlier this month. The jury trial date is to be determined, according to court records.

Chauvin also faces a separate federal indictment for allegedly violating the rights of a 14-year-old boy by detaining him without justification in 2017 and placing his knee on the boy’s neck for 17 minutes, causing the teen to pass out. Meanwhile, the Justice Department is investigating the Minneapolis Police Department for a systemic violations of people’s civil rights.

And earlier this month, the Minnesota Department of Human Rights filed a civil rights charge against the Minneapolis Police Department, launching a first-of-its-kind investigation to determine whether the department “engaged in systemic discriminatory practices” toward people of color over the last 10 years.

In an unapologetic sentencing memo, Nelson said, Chauvin was unaware that he was even committing a crime. In fact, in his mind, he was simply performing his lawful duty in assisting other officers in the arrest of George Floyd.”

Nelson said Chauvin is in solitary confinement because he is likely to be targeted by other prisoners. He argued that Chauvin was the product of a “broken system” and that “behind the politics, Mr. Chauvin is still a human being.”

Sampsell-Jones said that asking the judge to give Chauvin probation “is sort of absurd, everyone knows that’s not going to happen” and is so extreme that Chauvin’s defense attorney risks losing credibility in negotiating less time for him.

“This is not his first serious offense against a civilian,” said Nekima Levy Armstrong, a civil rights attorney and former president of the Minneapolis chapter of the NAACP. “He clearly abused his authority. And was in the process of teaching rookies how to abuse their authority as well.”

She said Chauvin deserved the maximum sentence for what she called a “modern-day lynching” that was caught on bystander video.

Reaction near Cup Foods after the guilty verdict was announced at the trial of former Minneapolis police Officer Derek Chauvin for the 2020 death of George Floyd, in Minneapolis, Minn. (Photo: Morry Gash/AP)

On Friday, the court is expected to hear from Floyd’s family and loved ones, who will provide victim impact statements to the judge. By law, they are not allowed to speak directly to Chauvin, said Mary Moriarty, the former chief public defender for Hennepin County.

Chauvin will also have the opportunity to make a statement to the court. Legal observers do not expect him to speak, especially because he wants to preserve any appeal. Chauvin remained mostly expressionless and stoic throughout the trial –– even when he was found guilty.

“It’s a difficult position because when people are convicted they often want to maintain their innocence and prove their right to appeal,” Moriarty said. “But one of the things a judge is looking for in considering a sentence is whether the person convicted takes responsibility for their actions & expressed remorse.”

She said the defense missed a chance to show that Chauvin had “some insight and empathy for George Floyd.”

This is also when Cahill can address Chauvin and his crimes directly –– explaining why he believes whatever sentence is appropriate –– for the first time in the case. Most legal observers believe Cahill has likely already made up his mind about sentencing.

There is only one Minnesota precedent that the judge can really compare to Chauvin’s situation. That’s the case of Mohamed Noor, a cop who shot and killed Justine Ruszcyk. She reported an assault and then startled Noor when she approached his squad car in the dark. Noor, who is Black, shot and killed Ruszcyk. He was sentenced in June 2019 to 12 1/2 years in prison after being found guilty of third-degree murder and manslaughter.

It’s notable that the first police officer convicted of killing someone in Minnesota is a Black man who had a white victim, said Sarah Davis, executive director of The Legal Rights Center in Minneapolis. Chauvin is the second.

Nelson has maintained throughout the trial that intense public interest tainted the jury pool and that the judge should have sequestered the jury or changed the trial’s venue. In a separate court filing, Nelson argued that those factors denied Chauvin a fair trial and asked that a new one be held elsewhere. The effort is unlikely to succeed, legal observers said.

From April:  Chauvin will likely appeal his guilty verdict. But the odds aren’t good.

A couple pays their respects to George Floyd in the intersection of 38th Street and Chicago Avenue on May 25, 2021 in Minneapolis, Minnesota. In cities around the US groups honored the life of George Floyd, who was murdered by Minneapolis Police officer Derek Chauvin on May 25, 2020. (Photo: Brandon Bell, Getty Images)