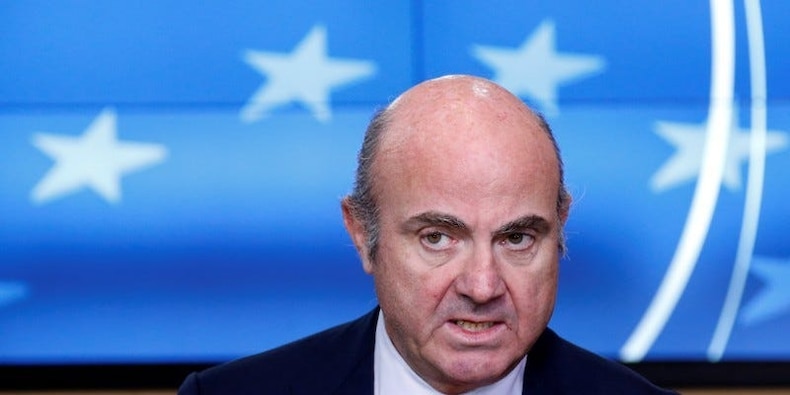 Crypto assets shouldn't be considered as a "real investment" because assessing their value is difficult, the vice president of the European Central Bank told Bloomberg on Wednesday. His came as the price of bitcoin and other cryptocurrencies were crashing.

"When you have difficulties to find out what are the real fundamentals of an investment, then what you're doing is not a real investment," Ede Guindos said during an interview on Bloomberg TV. "This is an asset with very weak fundamentals and that is going to be subject to a lot of volatility."

Guindos' appearance coincided with the release of the ECB's Financial Stability Report in which it said the surge in bitcoin prices "has eclipsed previous financial bubbles like the 'tulip mania' and the South Sea Bubble in the 1600s and 1700s."

Cryptocurrency prices sank Wednesday after the People's Bank of China said digital tokens can't be used as a payment form by financial institutions. Bitcoin tumbled as much as 31% on Wednesday and slid to lows around $30,000 that haven't been seen since the start of 2021. Ether, the token on the Ethereum platform, fell as much as 44% to trade under $2,000.

Bitcoin has also been under pressure in recent sessions after Tesla CEO Musk said the electric vehicle maker would stop taking bitcoin as payment because of the "insane" amount of energy needed to create new coins and secure the network.

The ECB in its report likened the surge in bitcoin's price to the speculative run-up in prices of tulips in Holland in the 17th century, as well as the 1720 financial crash centered on British investors in the South Sea Company who engaged in slave trading.

Bitcoin's price volatility makes it "risky and speculative, while its exorbitant carbon footprint and potential use for illicit purposes are grounds for concern," the ECB said.

But financial stability risks from crypto assets "appear limited at present," as they are still not widely for payments and as euro-area institutions have little exposure to crypto-linked financial instruments, the central bank said.

19/05/2021 Business Comments Off on Crypto assets are not a 'real investment' because their fundamentals are weak, says top ECB official | Currency News | Financial and Business News
Markets