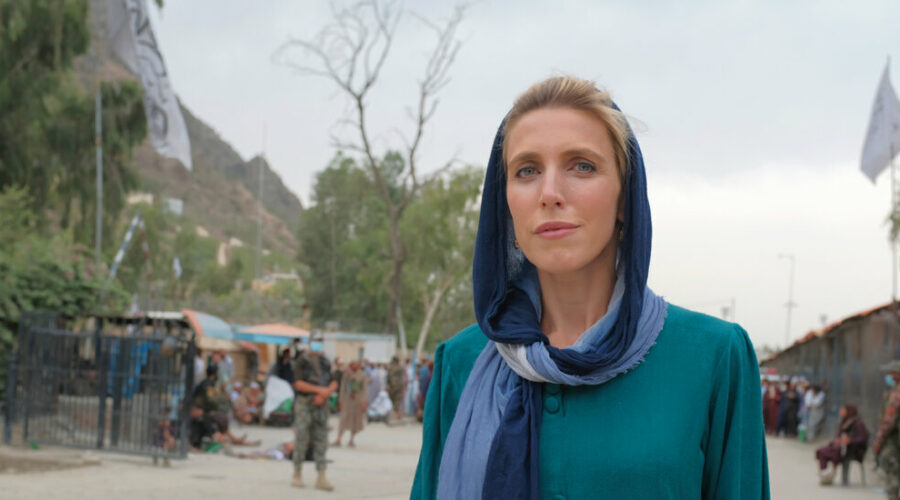 Clarissa Ward had four days to catch up on sleep and see her two sons, ages 1 and 3, at her parents’ home in France. Then she was off again, back to work, making her way through Qatar to Pakistan, where she reported from the Afghanistan border.

Ms. Ward, CNN’s chief international correspondent, was a center-stage broadcast reporter as she delivered her accounts, often with gunfire ringing in the background, on what it was like in Kabul in the often chaotic final days of America’s longest war. Along with her crew, she subsisted on eggs, cookies and Clif Bars while covering the U.S. withdrawal and the Taliban’s sudden return to power. At times, she couldn’t help showing emotion on the air.

“I can’t go and sit with an Afghan woman crying her heart out that her daughters are going to have to grow up in Taliban-led Afghanistan and be just unmoved by it,” Ms. Ward, 41, said in a video interview from France last week. “And I don’t think it makes me a lesser reporter that I am moved by it.”

Her job has included assignments in other conflict zones, including in Baghdad and Aleppo, Syria, often putting her in danger — and at a great distance from her privileged youth.

As she recounts in her 2020 memoir, “On All Fronts,” she was born in London to an American mother, an interior designer, and a British father, an investment banker. She had 11 different nannies by age 8. Home, for a time, was a series of townhouses on Manhattan’s Upper East Side, which her mother renovated and flipped. Then it was onto the elite British boarding schools Godstowe and Wycombe Abbey.

The idea of pursuing a career in journalism occurred to her on Sept. 11, 2001, when she was in her senior year at Yale, where her major was comparative literature. The attacks made her realize there was a world radically different from everything she knew, a world that seemed poorly understood in the United States and Europe.

“It sounds presumptuous, but I knew I had to go to the front lines, to hear the stories of people who lived there and tell them to the people back home,” she wrote in her book.

After an internship at CNN, she studied Arabic and got on-camera experience in Beirut, Lebanon and Baghdad as a reporter for Fox News. She left for ABC, where she worked out of Moscow and Beijing, and was hired away in 2011 by David Rhodes, then the president of CBS News. She posed as a tourist to slip into war-torn Syria, shooting video herself and sneaking the footage out of the country on memory cards stitched into her underwear. Her coverage earned a Peabody Award.

“It’s an art and a skill, and it requires a lot of experience to make the judgments that you need to make to do this coverage safely, frankly, because you just need to be able to read a difficult situation,” said Mr. Rhodes, who is now a group director of the British media company Sky.

“There are single-digit numbers of people globally that are really good at this,” he added. “She is one of those people.”

Ms. Ward joined CNN in 2015 and returned to Syria, again undercover, making her one of the few Western journalists behind rebel lines. In 2018, she was promoted to chief international correspondent, replacing Christiane Amanpour, who had moved on to an anchor role at CNN and PBS. Ms. Ward was soon reporting from Afghanistan’s Taliban-controlled Balkh province. For her latest reporting tour, Ms. Ward arrived in the country on Aug. 2, with a plan to stay two weeks.

“I never would have guessed that those two weeks would have turned into three weeks, and we would be there for the fall of Kabul, and the fall of Kabul would take place in a matter of hours, with hardly a shot fired on a sort of quiet Sunday afternoon,” she said in the interview.

At the start of the month, she was at the front lines with U.S.-allied Afghan troops in Kandahar. Three days later, the Taliban took the city.

“I reached out to one of the soldiers on WhatsApp, saying, ‘What happened to you?’” she said. “He just wrote: ‘We left.’ I think that was the beginning of me really understanding that the reason this was unraveling so quickly, in no small part, was because Afghan security forces were just not interested any longer in fighting this fight.”

By Aug. 14, Ms. Ward and her crew had moved on to a fortified compound in Kabul. They were hoping for a break in the action when Taliban troops arrived.

“By breakfast time, we knew they were at the gates,” she said. “In the afternoon, they started to make their way into the city.”

On Aug. 16, dressed in a full-length black abaya, she reported from a street filled with Taliban revelers outside the U.S. Embassy. “They’re just chanting ‘Death to America,’” she said, facing the CNN camera, “but they seem friendly at the same time. It’s utterly bizarre.”

Senator Ted Cruz, Republican of Texas, quickly pounced, posting a video of Ms. Ward’s report on Twitter with the comment, “Is there an enemy of America for whom CNN won’t cheerlead?” (The CNN corporate communications department quickly responded from its own Twitter account with a reference to Mr. Cruz’s decision this year to leave his Houston home during a winter storm when much of the state lost electricity: “Rather than running off to Cancun in tough times, @clarissaward is risking her life to tell the world what’s happening.”) The shading of her work by the senator and other conservatives highlighted how journalists may find their work or statements turned into political talking points while reporting from conflict zones in a time of deep polarization.

“As a person who is emphatically not involved in political coverage in any way, shape or form, I’m always a little uncomfortable when you get kind of shoehorned into the narrative somehow,” Ms. Ward said.

Another report, broadcast live as she stood among Taliban members in Kabul, underlined a particular challenge she had dealt with before in Afghanistan: “They just told me to stand to the side because I’m a woman,” she told viewers.

As the days wore on, she interviewed women too fearful to leave their houses and others frantically trying to find a way out of the country. From outside Kabul’s Hamid Karzai International Airport on Aug. 18, Ms. Ward reported that Taliban fighters had beat people trying to escape with truncheons and fired on crowds.

Her recent reports from Afghanistan brought her new attention: Her Instagram follower count shot up to 250,000, from 60,000, in a week. With the increased visibility came the scrutiny of critics on social media and elsewhere, who found fault with her Aug. 20 report expressing skepticism that the United States could pull off the planned mass evacuation.

“I’m sitting here for 12 hours in the airport, eight hours on the airfield and I haven’t seen a single U.S. plane take off,” she said on the air that day. “How on earth are you going to evacuate 50,000 people in the next two weeks? It just, it can’t happen.”

Days later, President Biden said the United States had helped evacuate more than 70,000 people from Aug. 14 to Aug. 24. The New York Times reported last week that more than 123,000 people had been airlifted out of the country since July.

Understand the Taliban Takeover in Afghanistan

Who are the Taliban? The Taliban arose in 1994 amid the turmoil that came after the withdrawal of Soviet forces from Afghanistan in 1989. They used brutal public punishments, including floggings, amputations and mass executions, to enforce their rules. Here’s more on their origin story and their record as rulers.

Who are the Taliban leaders? These are the top leaders of the Taliban, men who have spent years on the run, in hiding, in jail and dodging American drones. Little is known about them or how they plan to govern, including whether they will be as tolerant as they claim to be. One spokesman told The Times that the group wanted to forget its past, but that there would be some restrictions.

How did the Taliban gain control? See how the Taliban retook power in Afghanistan in a few months, and read about how their strategy enabled them to do so.

What happens to the women of Afghanistan? The last time the Taliban were in power, they barred women and girls from taking most jobs or going to school. Afghan women have made many gains since the Taliban were toppled, but now they fear that ground may be lost. Taliban officials are trying to reassure women that things will be different, but there are signs that, at least in some areas, they have begun to reimpose the old order.

What does their victory mean for terrorist groups? The United States invaded Afghanistan 20 years ago in response to terrorism, and many worry that Al Qaeda and other radical groups will again find safe haven there. On Aug. 26, deadly explosions outside Afghanistan’s main airport claimed by the Islamic State demonstrated that terrorists remain a threat.

How will this affect future U.S. policy in the region? Washington and the Taliban may spend years pulled between cooperation and conflict, Some of the key issues at hand include: how to cooperate against a mutual enemy, the Islamic State branch in the region, known as ISIS-K, and whether the U.S. should release $9.4 billion in Afghan government currency reserves that are frozen in the country.

Ms. Ward defended the Aug. 20 dispatch, saying it should be interpreted in the context of “live, in-the-moment reporting.”

“We had been at the airport since 7 a.m. local,” she said. “From 7 to 10 a.m., we saw three U.S. planes take off with evacuees, but then they abruptly stopped for approximately 10 hours.” At the time, she added, she didn’t see how the United States could complete the evacuation in the time it had set for itself.

CNN’s president, Jeff Zucker, praised her reporting, citing not only her Afghanistan coverage, but her dispatches this year on the poisoning of the Russian opposition leader Alexei Navalny, a military coup in Myanmar and the impact of the pandemic on India.

“I’d be hard pressed to say Clarissa wasn’t the most important hire I’ve made,” he said. “She’s willing to go where most others won’t go.”

Ms. Ward left Kabul on Aug. 20, along with her crew and Afghans who had worked for CNN, on a flight to Qatar. Prevented from going straight to her London home because of pandemic restrictions, she was reunited in France with her children and husband, Philipp von Bernstorff, a German count and businessman whom she met at a Moscow dinner party in 2007.

She said she views herself as a reporter who tries to provide viewers with an understanding of what is happening in conflict zones, while also capturing the experiences and reactions of those directly affected.

“It’s not my job to say whether it has been handled well or not,” she said of the troop withdrawal. “It’s my job to give a voice to those people and say this is how they feel.”

She said she would continue covering Afghanistan. The Taliban, for now, are “talking the talk” in terms of not violating women’s rights, she said.

“Our jobs as journalists is to stick around for long enough to find out if they are walking the walk,” she said. “If we do start to see retaliation, reprisal killings, walking back of women’s rights or women’s education, we need to be telling that story. And I feel very, very strongly about that.”