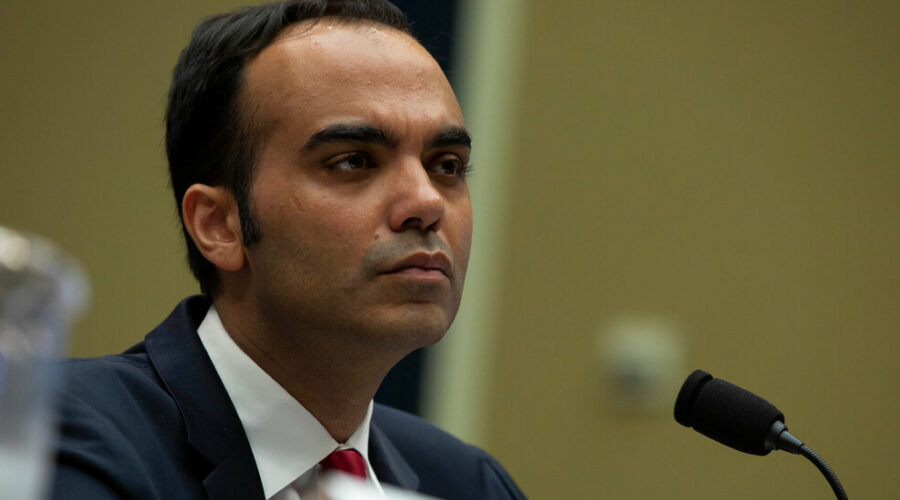 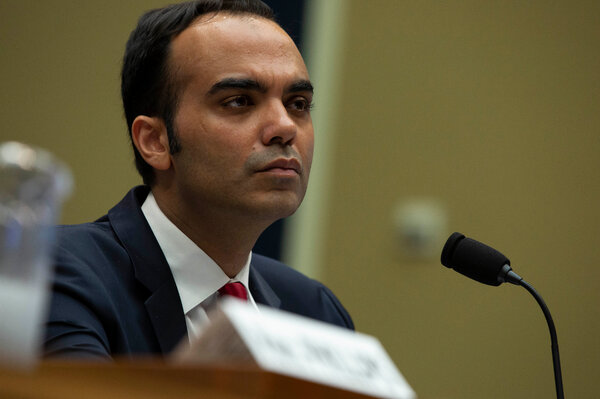 After months in limbo, Rohit Chopra was narrowly confirmed by the Senate yesterday as the next director of the Consumer Financial Protection Bureau in a 50-to-48 party-line vote. Republicans had resisted Chopra’s confirmation, with the Senate Banking Committee’s ranking member, Patrick Toomey of Pennsylvania, saying he would use the bureau’s powers to pursue an “aggressively anti-business agenda.”

Chopra’s appointment aligns with the Biden administration’s push to rein in corporate power via its choices for key regulatory and policymaking positions.

Republicans never loved the bureau. The C.F.P.B. — the brainchild of Senator Elizabeth Warren, Democrat of Massachusetts — was created by the Obama administration in response to the 2008 financial crisis. It’s intended to protect consumers from predatory banks and lenders and has shut down numerous scams. Chopra was the agency’s first student loan ombudsman, a role noted by Senator Sherrod Brown of Ohio, the Democrat who leads the banking committee, when praising his appointment. “He’s going to protect you,” Brown told young Senate pages with student debt who were watching the floor vote.

Times have changed. Chopra, who previously served as the C.F.P.B.’s assistant director, was confirmed unanimously as an F.T.C. commissioner in 2018 after being nominated by President Donald Trump. Many of the Republican senators who voted for him then opposed him yesterday, citing his attitude to oversight of the agency.

The C.F.P.B. has been in disarray for a while. In 2017, the bureau’s initial director, Richard Cordray, stepped down and named an acting replacement, but so did Trump, leaving the agency with no clear authority. Trump’s acting director was the White House budget director, Mick Mulvaney, who once called the C.F.P.B. a “joke.”

The agency is so disdained by Republicans that the Trump administration didn’t defend it in a Supreme Court case challenging its very existence. Chopra “can start rectifying the damage,” Carl Tobias of the University of Richmond law school told DealBook. He is likely to focus on pandemic relief measures first, and is expected to tighten oversight of the fintech industry, credit bureaus and payday lenders.

Merck says a trial shows it has produced the first effective antiviral pill for Covid. The drug maker said it would seek authorization for the pill after it was shown in a clinical trial to cut the risk of hospitalization or death from the virus in half when given to high-risk people early in their infections. It could become the first in a wave of pills under development that may offer a powerful tool to tame the pandemic.

A government shutdown is averted, as lawmakers prepare for other battles. A bill to fund the government through early December passed the House and the Senate, but other measures — a $1 trillion infrastructure package, a $3.5 trillion social spending bill and an agreement to raise the debt ceiling — stalled out. Senator Joe Manchin, the moderate Democrat of West Virginia, dealt a setback to President Biden’s agenda when he said he would not support more than $1.5 trillion in social spending.

Policymakers worry about rising prices. A key inflation gauge out today is expected to show that prices in August rose twice as fast as the level targeted by the Fed. Rising prices are also a concern in Europe, with data today showing eurozone inflation at its highest rate since 2008.

Lordstown Motors finds a partner — and maybe a buyer. The troubled electric truck manufacturer confirmed a deal to partner with Foxconn, the Taiwanese manufacturer that assembles iPhones. The deal could result in Lordstown selling its Ohio factory to Foxconn for $230 million.

Zoom’s $15 billion takeover of Five9 gets disconnected. The companies agreed to terminate the deal after it did not receive enough support from Five9’s shareholders. DealBook hears that Five9 was concerned about Zoom’s falling stock price, given that the deal was structured as an all-stock transaction. Zoom’s shares are down more than 25 percent since announcing the deal in July. There were also worries about a prolonged regulatory review of the deal on national security grounds.

The week in Ozy Media

The bad news for Ozy Media didn’t stop with The Times’s report on Sunday about how a co-founder impersonated a YouTube executive on a call with Goldman Sachs this year as it sought a $40 million investment from the bank. Last year, The Times reports, the digital media company hired staff members and booked guests for a show that it said would air on A&E after the cable network had already passed on it.

The fallout from the revelations has been swift. Here’s a recap:

Monday, Sept. 27: Ozy’s board begins an internal investigation into the company’s business practices and says it has asked Rao to take a leave of absence during the investigation. A&E cancels the broadcast of a documentary hosted by Watson scheduled to air that night.

Tuesday, Sept. 28: Watson pulls out of his scheduled appearance hosting the Emmy Awards ceremony for news and documentaries.

A few of the bigger questions raised by these cascading revelations: How widespread are misleading measures of audience reach among digital media start-ups? Do mental health issues excuse professional misconduct? Is due diligence in the age of Zoom a dangerous game?

“All parents reach a time when they must let go and trust that the values imparted will live on within their children. That time has nearly come for me and for Whole Foods.”

— John Mackey, the co-founder and C.E.O. of Whole Foods, in a letter announcing his retirement next year. He grew the company from an organic grocer in Austin, Texas, into a 500-oulet chain that was sold to Amazon in 2017 for $13.4 billion.

Corporate governance circles have been captivated by a peculiar board battle at NextGen Healthcare. The long-running dispute between directors centers on the practice of “cumulative voting,” which is intended to empower smaller shareholders, but which some critics say allows for a determined minority to outmaneuver a diffuse majority. Most publicly traded U.S. companies do not use cumulative voting.

How cumulative voting works: In a typical voting setup, an investor with 100 shares considering a slate of 10 nominees can vote up to 100 times for each proposed director. Under cumulative voting, that investor can distribute 1,000 votes (100 shares for 10 nominees) in any proportion, including all 1,000 votes for one nominee and none for the rest. That concentration gives the investor more power relative to others with more shares. (Here’s a calculator that shows it in action.)

Why it matters to NextGen: NextGen’s management and a majority of its directors say that cumulative voting puts them at the mercy of two directors: the company’s founder, Sheldon Razin, and his boardroom ally Lance Rosenzweig.

Razin and Rosenzweig, who collectively own 15.2 percent of the company’s stock, have started a proxy contest, putting forward a slate of director nominees ahead of an Oct. 13 shareholder meeting. Among others, they are asking investors to replace the company’s chairman, Jeffrey Margolis, whom they accuse of overseeing poor financial performance and fostering an “imperial culture.”

NextGen is proposing its own nine-member slate, which excludes Razin and Rosenzweig. It is also asking shareholders to vote to reincorporate the company to Delaware from California, where cumulative voting is the default. NextGen says cumulative voting has made it harder to unseat Razin, who has been on the board for 47 years, as relations frayed.

Tensions on NextGen’s board have been simmering for years. In 2015, the board pushed Razin to step down as chairman after an independent investigation found that he was having unauthorized conversations about selling the company. (Razin contends that he was informally fielding interest.) Since then, management has described its strategy as fixing a “destabilized” company inherited from Razin. Razin argued that the rest of the board is what is entrenched, and that it is using the issue of cumulative voting as a “scare tactic” in its attempt to “weaken shareholders’ rights.”

“It is unfortunate that some of the disagreements are playing out publicly,” said Jeff Garro, an analyst at Piper Sandler. Garro said the “company is in a better position than it was five years ago,” but Razin “still has some helpful insights into the industry.” Shareholders will have their say in two weeks, and they will have a lot to consider — news releases, leaked emails, presentations and proxy updates have been flying back and forth nearly every day between NextGen and Razin — before they submit their votes.

The $10 billion bidding war over the British supermarket Morrisons will be settled by an auction tomorrow, pitting Fortress against Clayton, Dubilier & Rice. (Reuters)

Tata has reportedly made the winning bid for Air India, taking the state-owned airline back to the group where it originated. (Bloomberg)

The $1.8 billion merger of Parallel, Beau Wrigley’s cannabis company, and a SPAC run by Scooter Braun has been called off. (Yahoo)

JPMorgan Chase said it had been shut out of municipal bond deals in Texas because of a state gun law. (Bloomberg)

U.S. antitrust enforcers are taking a look at whether private equity ownership leads to a lack of competition. (WSJ)

Can you answer these questions from the C.F.A. exam? (NYT)

“The World Wants Greenland’s Minerals, but Greenlanders Are Wary” (NYT)

01/10/2021 Business Comments Off on Chopra in Charge
Markets