DuSable, originally from present-day Haiti, settled near the mouth of the Chicago River in the late 1770s, according to the DuSable Heritage Association. He married a member of the Potawatomie tribe, Kittihawa, and became a prominent trader in the area.

The change Friday renames a 17-mile stretch of the expressway from the North to the South Sides on the outer drive to avoid the changing of hundreds of addresses on the inner drive.

A previous attempt to rename the expressway for DuSable – sponsored by then-Ald. Toni Preckwinkle, who now serves as Cook County Board president – failed in 1993. But in 2019, Ald. David Moore took up the cause again. That year, the city renamed a major parkway for journalist Ida B. Wells.

“It is appalling that the founder of this great city has no major street named after him in Chicago. It is my hope that this city can right a wrong that is 230 years in the making,” Moore wrote at the time.

‘First martyr of the voting rights movement’: How a Black man’s death in 1965 changed American history

Ephraim Martin, chairman of the Black Heroes Matter coalition, which has been advocating for greater recognition of DuSable in Chicago, said the murder of George Floyd last Memorial Day reinvigorated the movement to honor DuSable.

“It pushed us to say enough is enough,” he said last month.

The site of DuSable’s settlement along the Chicago River is a National Historic Landmark, and a small bronze bust of DuSable at the downtown location overlooks the water. A school, museum, harbor, bridge and unfinished park have been named in his honor.

Proponents of the change long pushed to rename the roadway “Jean Baptiste Point DuSable Drive.” After a racous city council meeting Wednesday and two previous attempts to bring the motion for a vote, city officials settled on a compromise: a hybrid “DuSable Lake Shore Drive.”

Chicago Mayor Lori Lightfoot had earlier proposed an alternative plan to honor DuSable: completing the DuSable park project along the lakefront and renaming the city’s Riverwalk for him.

“It goes without saying that DuSable has not been properly recognized, in my view, as the founder of this city. We don’t exist if he doesn’t come set up a trading post with his wife, Kittihawa,” Lightfoot said at an unrelated press conference April 29. “What we’ve done to date, historically, is woefully inadequate.” 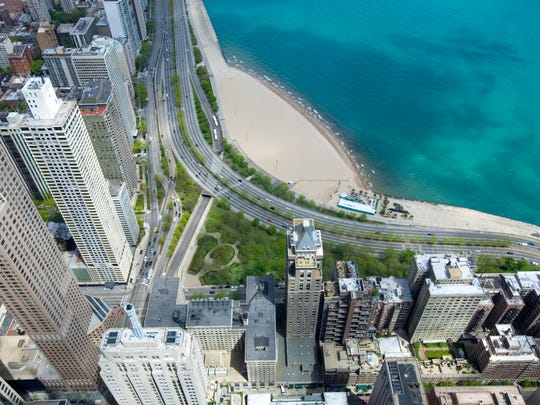 Who was Jean Baptiste Point DuSable?

Jean Baptiste Point DuSable was born in the French colony of Saint-Domingue around 1745 to a French mariner and an enslaved African woman, according to the DuSable Heritage Association.

He migrated to New Orleans in 1765 and traveled up the Mississippi River, according to the association. He settled in Kaskaskia (present-day Peoria, Illinois), and lived among various Native American tribes, eventually marrying his wife, Kittihawa. The couple had a well-documented Catholic marriage ceremony in 1778 and gave birth to two children, Jean-Baptiste Jr. and Suzanne, according to the association.

In 1779, in the midst of the American Revolution, DuSable was arrested briefly by British officials who suspected him of rebel sympathies, according to the Chicago History Museum.

By the late 1770s, DuSable settled in Chicago, according to the association. His estate, located on the north bank of the Chicago River at its junction with Lake Michigan, included a home, horse mill, bake house, smokehouse, poultry house, workshop, stable and a barn, according to the association. It was a “natural crossroad” for Native Americans and Europeans seeking access to the Mississippi River.

“Many explorers and pioneers had come in passing prior to this settlement. However, none had stayed. Thus, DuSable established the first permanent settlement in present-day Chicago and lived at that site for at least a decade,” the association writes on its website. “He set up a trading post which supplied customers with flour, pork and bread in exchange for cash and durable goods.”

According to the Chicago History Museum, DuSable “prospered during the 1790s, entertained travelers who passed over the portage, and was highly respected.”

But in 1800, for reasons unknown, DuSable sold his property to a French-Canadian fur trapper, according to the association. Four years later, white trader John Kinzie  purchased the land.

It is Kinzie that would “eventually be remembered as Chicago’s founder,” historian Henry Louis Gates Jr. wrote in a profile of DuSable for The Root in 2013.

DuSable returned to Peoria for over a decade and then moved to St. Charles, Missiouri, where he died in 1818, according to the association.

By the 1920s, DuSable was “making regular appearances in Black history features,” Gates wrote. The Chicago Defender – one of the nation’s leading African American newspapers – championed DuSable’s legacy, according Gates.

In 1928, the Defender scoffed at city leaders for refusing to name a prominent highway after its first citizen, Gates wrote. And in his 1957 column in the Defender, Harlem Renaissance poet Langston Hughes referred to DuSable as “the brownskin pioneer who founded the Windy City,” according to Gates.

Due to the advocacy of Black Chicagoans, a replica of DuSable’s home and a pamphlet on his life were on display when the World’s Fair came to Chicago in 1933, according to Gates.

Chicago officially recognized DuSable as its founder in 2006 and dedicated DuSable Bridge across the Chicago River in 2010.