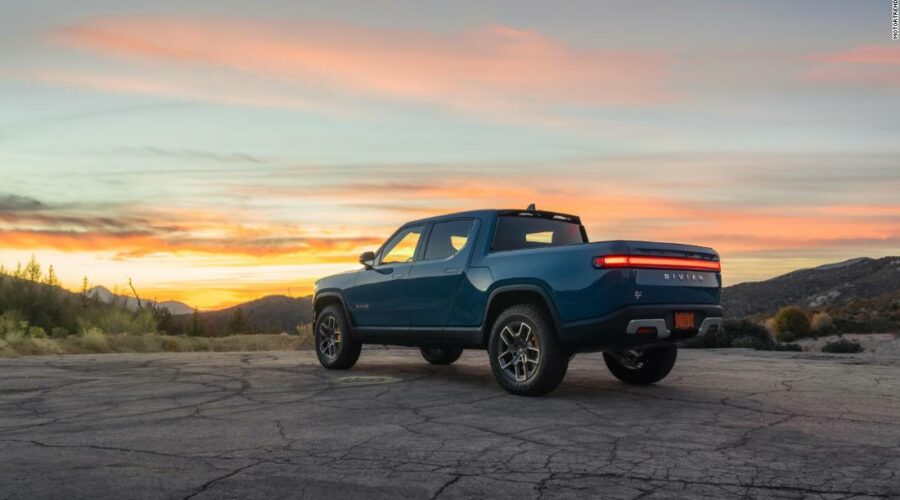 (CNN)Some brand new car companies are hitting huge home runs with groundbreaking new vehicles, according to the staff at MotorTrend.

The Rivian R1T has just been awarded the 2022 MotorTrend Truck of the Year Award just a month after the Lucid Air won the Car of the Year award.
In each case, it was the first time any automaker has won the award with its first vehicle. Tesla won Car of the Year in 2013 with the Tesla Model S, another electric vehicle from a startup automaker, but that was Tesla’s second model, after the original Tesla Roadster.

MotorTrend, which started as a print magazine in 1949, now also operates cable and streaming video channels and boasts of being the world’s largest automotive media company. Its annual “Of the Year” awards, which date back to the magazine’s founding, are sought after by auto manufacturers and, when won, are touted in ads.

The Rivian R1T is also the first truck not made by one of the traditional Detroit’s Big Three automakers to win the award since 2008.

Ed Loh, head of editorial for MotorTrend, said Rivian’s win is even more remarkable than Lucid’s because of the challenge pickup trucks represent. 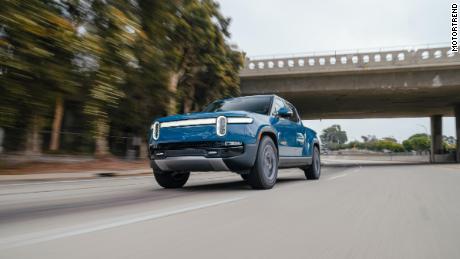 Trucks are called upon to perform a much broader range of functions than cars, said Loh, while providing a comfortable ride and good driving experience. Truck manufacturers also tend to be rather conservative when designing new models, MotorTrend writers said, not wanting to risk proven and highly profitable designs. The top selling vehicles in America are the Ford F-series and Chevrolet Silverado.
That makes the Rivian truck all the more striking, MotorTrend noted in its announcement. This year’s finalists for the award included other nontraditional pickups such as the GMC Hummer EV, another all-electric truck, and the Hyundai Santa Cruz, which is essentially a crossover SUV with an open cargo bed.
The Rivian R1T is the first commercially available electric vehicle with four motors, one to power each individual wheel. That allows greater off-road capability, because power can be sent precisely to the wheels with the most traction. When driving on pavement, it also helps with cornering, giving the R1T on-road similar performance to a luxury sedan, according to MotorTrend.
When testing the Rivian’s competitor, the Hummer EV, MotorTrend staffers were impressed with that truck’s power and quickness, but not with its enormous weight (over 9,000 pounds) or with its brakes, which, according to the writers, weren’t up the task of quickly stopping all that mass.
The R1T’s body has no gap between the bed and passenger cab the way most trucks do. That’s not entirely unique -— smaller trucks like the Ford Maverick, another finalist this year, and Honda Ridgeline also lack that gap — but Rivian designers used that available body area to include a cargo tunnel that runs across the truck where that gap would have been. When open, doors to that enclosed cargo area can also be used as side steps to reach into the bed up onto the roof. The R1T also has a big storage area under its hood.
MotorTrend’s writers also lauded the Rivian’s interior design and materials calling them worthy of the truck’s $70,000 price tag. While MotorTrend staffers didn’t care for the R1T’s heavy reliance on a touch screen for many vehicle functions, they said the interface was at least reasonably easy to use.
MotorTrend is part of a joint venture co-owned by Discovery Inc. CNN is part of WarnerMedia which is expected to merge with Discovery next year.
Rivian only recently began building the the R1T for customers and production was, initially, very slow, according to documents filed with Securities and Exchange Commission. Whether startup companies like Lucid and Rivian will be able to supply vehicles and service to their customers in the years ahead wasn’t really a consideration for the award, Loh said.
“It’s Car of the Year. It’s Truck of the Year,” he said. “It’s not Business Plan of the Year.”
Skeptics raised similar concern when Tesla won the award in 2013, he pointed out, and Tesla went to become the world’s best-selling maker of electric vehicles.

MotorTrend, then spelled Motor Trend, gave out its first Car of the Year award in 1949. At the time, the award was given to an overall car brand and Cadillac won. The first Truck of the Year award was given in 1977 to the Ford Econoline van — also considered a truck — but the award wasn’t given at all between 1980 and 1989. Motor Trend’s annual awards aren’t always predictors of market success. In 2002, the Car of the Year award went to the retro-styled Ford Thunderbird, which continued in production only three more years after that.
Today, the awards are given to individual vehicle models that are either entirely new or completely redesigned for the new model year.
Source: Read Full Article

14/12/2021 Business Comments Off on Check out the Rivian R1T, a glamper's dream truck
Markets