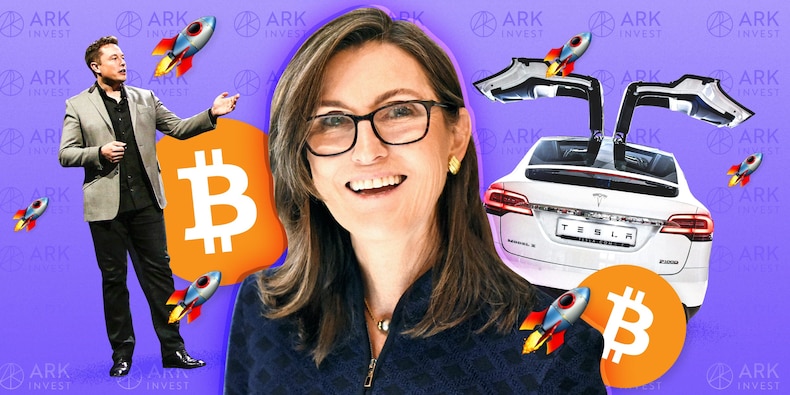 Ark Invest’s Cathie Wood on Wednesday said the growth of digital wallets will “gut” traditional banks and she remains bullish on bitcoin and Tesla, according to a webinar seen by Reuters.

Wood, who is known for her strategy of investing in highly disruptive companies, counts Tesla as one of the major stock picks in her $24.4 billion ARK Innovation exchange-traded fund. The automaker accounts for roughly 10% of the fund’s portfolio. Earlier this month, Tesla pulled off its biggest bitcoin endorsement yet by revealing a $1.5 billion investment in the digital asset.

Jack Dorsey’s payments firm Square also disclosed an additional $170 million investment, bringing its total bitcoin holdings to 5% of its balance sheet. If other US companies follow this trend, the price of bitcoin could rise by between $40,000 and $400,000, according to Wood.

Wood is convinced Tesla’s head-start in autonomous driving remains attractive. Companies that outperformed in the stay-at-home environment during the pandemic, such as Roku and Zoom, are other attractive stocks, owing to their expected growth rate over the next five years, she said.

She said shares in Zoom are “probably undervalued” and that Roku and Amazon “will take the lion’s share of the connected TV market.”

Wood said her fund remains “opportunistic” despite recent decline in the S&P 500 that has been driven by  concerns about lofty valuations and chances of higher inflation. “The benchmarks are filling up with value traps” due to growing innovation in fields including artificial intelligence and robotics, she said. “We think the big risk is in the benchmarks, not what we’re doing.”

The Nasdaq Compose closed 2.7% lower on Wednesday as tech stocks plummeted after disappointing labor-market data and a rise in Treasury yields, while the S&P 500 fell 1.3%.

04/03/2021 Business Comments Off on Cathie Wood says digital wallets will 'gut' traditional banks – and expects bitcoin to rise by as much as $400,000 | Currency News | Financial and Business News
Markets