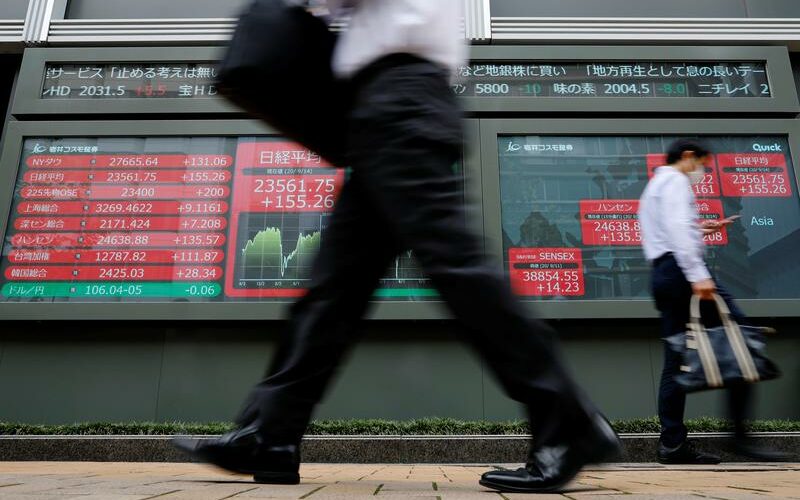 LONDON (Reuters) – World stock markets treaded water near record highs on Wednesday as investors braced for any hawkish signals from the conclusion of the Federal Reserve’s two-day policy meeting, and oil prices hit their highest since April 2019 on recovering demand.

FILE PHOTO: Passersby wearing protective masks walk past an electronic board showing Japan’s Nikkei average, the exchange rate between Japanese yen against the U.S. dollar and other world’s benchmarks outside a brokerage, amid the coronavirus disease (COVID-19) outbreak, in Tokyo, Japan September 14, 2020. REUTERS/Issei Kato/File photo

Investor bullishness about the economic recovery after COVID-19 and ample stimulus from central banks and governments has propelled stocks to record highs and pushed volatility across asset classes to levels last seen before the pandemic roiled markets in March 2020.

But inflation is also rising in the United States and elsewhere. Data on Wednesday showed UK inflation unexpectedly jumped above the Bank of England’s 2.0% target in May and hit 2.1%, and inflation looks set to rise further as Britain reopens its economy.

That makes the tone and content of Wednesday’s readout from the Fed’s meeting more important for global markets. Officials are expected to at least flag the pending start of talks about when and how to exit the policies introduced during the pandemic last year.

With markets having priced in the start of those talks about tapering but unsure whether rising inflation will encourage more aggressive action from the Fed and other central banks, some caution has crept in.

On Wednesday, the MSCI world equity index, which tracks shares in 49 countries, was flat on the day.

“The FOMC (Federal Open Market Committee) meeting is highly unlikely to bring any changes to either rates or the pace of asset purchases,” UniCredit analysts said.

“However, we expect the Fed to signal that, if the economy continues to recover strongly, it will likely be appropriate to begin to discuss a plan for tapering the pace of asset purchases at some point in upcoming meetings.”

Key will be Fed members’ projections, or dot plots, for interest rates and whether more now tip a hike in 2023. Previously only seven out of 18 had seen such a move.

There could also be some upward movement in inflation projections for this year and next, as the last two readings on consumer prices surprised to the high side.

BofA’s latest survey of fund managers suggests most are sanguine on the outlook. Some 72% said inflation was transitory. Only 23% saw it as permanent.

“Investors are bullishly positioned for permanent growth, transitory inflation and a peaceful Fed taper via longs in commodities, cyclicals and financials,” said BofA, suggesting the market was vulnerable to any hint of Fed hawkishness.

Bond investors remain sanguine about the prospect of a shift in policy thinking.

Benchmark 10-year U.S. Treasury yields held at 1.494%, a quarter of a percentage point below 2021 highs, while the European Union raised 20 billion euros in 10-year debt yielding less than 0.1% amid near-record demand.

The only signs of investor nervousness were evident in currency markets where the dollar held near a one-month high.

Sterling gained 0.2% versus the dollar but at just above $1.41 remained within recent ranges. The euro traded at $1.213.

Copper lost some ground as China confirmed it would release some reserves of the base metal, as well as aluminium and zinc to help contain recent price rises in commodities.

Oil prices continued their bullish run to hit their highest in more than two years amid signs of stronger demand and still tight supplies. [O/R]

Cryptocurrency prices were calm, with Bitcoin holding a little above $40,000.