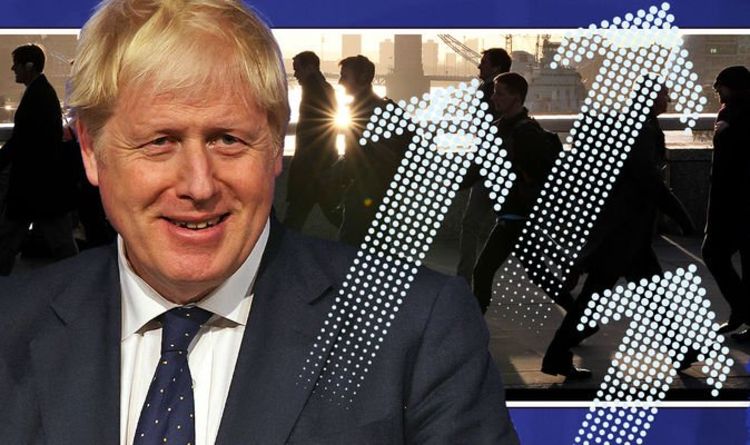 State pension: Expert discusses when payments are made

Mr Jessop shared a graph showing figures of payroll employees for a period between July 2014 and August 2021 which highlights that the number of employees declined between February and November 2020, before rising more recently.

The Office for National Statistics info shows that the number of payroll employees increased by 241,000 to 29.1 million in August, which has caused a lift in employment in regions of the UK to pre-pandemic levels except in London, Scotland and south-east England.

The figures, which are collected from HMRC data, show a surge in payroll jobs which could be due to the relaxation of lockdown rules in July, which sparked a surge of hiring in the UK job market.

The rise is likely due to employers scrambling to hire staff after widespread labour shortages during numerous lockdowns, and the influx in hiring has helped to return the number of workers on company payrolls to pre-pandemic levels in August.

Industries including the hospitality sector took a huge hit during the last year due to the UK leaving the EU and also saw damage to the economy caused by coronavirus.

In addition to the rise in jobs, figures also show that the number of job vacancies soared to more than 1m in August for the first time since official records began in 2001.

Elsewhere in a round-up of figures that show a reassuring image of the UK economy’s current state, Mr Jessop highlighted that unemployment rates fell to 4.6 percent in May-July, and was just 4.4 percent in July alone in three month averages.

The rate of unemployment saw a drop of 0.3 percentage points from the previous quarter but remains 0.6 percent points higher than before the pandemic struck.

He also stated another reassuring figure, showing that there was an underlying regular pay growth averaging between 3.6 percent to 5.1 percent.

He referred to the pay growth as a “goldilocks” situation, asking his 12.4k followers to think of “porridge” in reference to the fairytale, citing that the current growth hits a happy medium point.

He did point out though that if the rate continues to grow at its current rate, it could impact inflation in the long-term.

When referencing the wage growth, he said it was: “Hot enough to boost spending power, but not so hot that it should seriously worry the BoE.

“However, if wage growth remains this strong, rising labour costs will add to price pressures, keeping inflation higher for longer.”

These wage growths could also be a resulting factor of Brexit, as pressure on global supply chains, and problems importing goods and materials due to the UK’s exit from the EU had a knock-on effect.

These factors resulted in increased costs along with rising wages as employers paid more to attract and retain talent, according to BDO’s report.