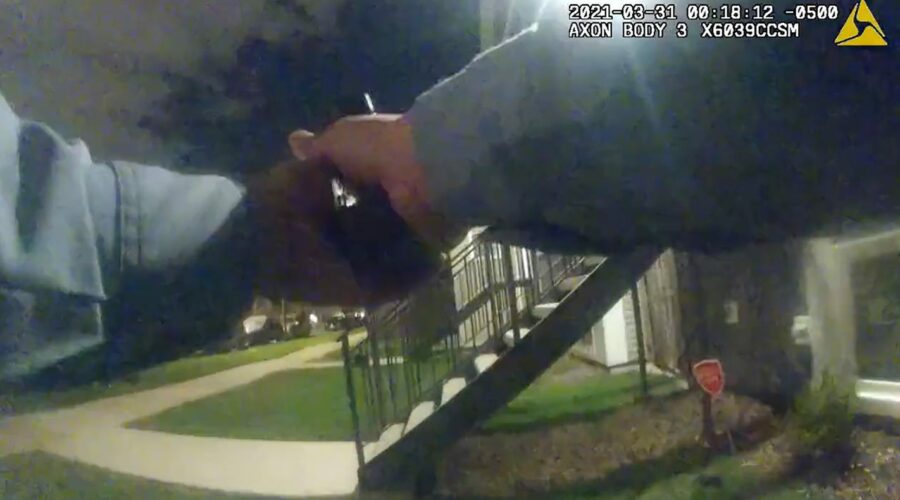 In this image taken from Chicago Police body cam video from early Wednesday, March 31, 2021, a Chicago police officer holds out his weapon during a foot chase with Anthony Alvarez in Chicago. Alvarez was fatally shot by police during the incident. Police claim Alvarez, 22, brandished a gun while being chased. (Photo: AP)

CHICAGO – Footage released Wednesday of the fatal police shooting of 22-year-old Anthony Alvarez showed Alvarez running away from police with his back facing the officer who fired multiple times at him.

Chicago’s Civilian Office of Police Accountability recommended the officer who shot Alvarez be “relieved of police powers” during the investigation, according to a statement released along with the footage. The officer involved in the late March shooting has been placed on routine administrative duties for 30 days, police said.

An officer gets out his car, runs through a neighborhood and shouts, “Drop the gun! Drop the gun!” while chasing Alvarez, according to body camera footage. About a second later, five gunshots are heard, and Alvarez is seen on the ground, moaning. Alvarez appears to drop a gun after the shots are fired and he falls to the ground.

Authorities have not released the name of the officer who shot Alvarez, though a report posted by COPA identified the officer as 29-year-old Evan Solano.

Evolution of a city’s account of a killing: How Chicago’s narrative changed in the fatal police shooting of Adam Toledo

Visual analysis: What happened when 13-year-old Adam Toledo was shot and killed by Chicago police

“Why are you shooting me?” Alvarez asked the officer.

“You had a gun,” the officer said.

Alvarez did not follow verbal direction, fled and was armed with a semiautomatic pistol, according to a police report.

When Alvarez groans and shifts slightly, officers order him to say on the ground. One says, “Cuff him. Cuff him.”

“Stop, stop, stop moving,” one officer says. “I’m trying to help you. Stay with me, dude.”

Video shows officers administer first aid and perform chest compressions on Alvarez as blood soaks his pants and the sidewalk under him.

Gesturing at the grass nearby, an officer says “The gun is right there.”

Officers “immediately rendered aid until medical personnel arrived,” and Alvarez was transported to Advocate Illinois Masonic Medical Center, where he was pronounced dead, Chicago police Superintendent David Brown said at a news conference following the release of the footage.

Brown said he reviewed the video several weeks ago. He declined to provide an opinion, as he will decide the officer’s fate after the COPA investigation.

“It’s really important as the final decision-maker that I withhold opinions,” he said.

The family’s attorney, Todd Pugh, said the family was left with more questions than answers Tuesday after viewing video of the shooting.

“But I know what I saw,” Pugh said after viewing the video. “And I saw a Chicago police officer shoot their son as he ran away from them.”

A Wednesday statement from COPA said Alvarez was “an individual familiar to the officers” but did not explain how he was known. COPA has not said why officers were chasing Alvarez.

Two weeks ago, eight members of Alvarez’s family joined more than a thousand people at a rally and march in the city’s Logan Square neighborhood demanding justice for Alvarez, 13-year-old Adam Toledo and 25-year-old Marc Anthony Nevarez, all fatally shot by Chicago police.

Alvarez’s cousin Roxana Figueroa, flanked by several children holding pictures, said seeing the videos released in Toledo’s case gave her family the strength to demand transparency in their case, too.

“When I saw the video, it gave our family hella strength to show up today,” Figueroa said.

Figueroa said the family wants to know why he was being chased and why police gunned him down.

Following the shootings of Toledo and Alvarez, Mayor Lori Lightfoot called for the police department to implement foot pursuit policy reforms, saying such pursuits are one of the most dangerous activities police engage in because they are often separated from their partners and communication becomes difficult. She said there will be focus groups of officers and community members to evaluate best practices.

Brown said the city has drafted a new policy and is in the process of sending it to internal focus groups and making plans for community comment periods.

He said the review was “very timely,” given the high-profile police foot chase shootings in the past month.

“Obviously we are proceeding with a sense of urgency,” Brown said, adding, “It really is important for us to get it right.”

Protesters call for justice in the shooting death of Anthony Alvarez outside the headquarters of the Civilian Office of Police Accountability, Tuesday, April 27, 2021, in Chicago. (Photo: Terrence Antonio James, AP)