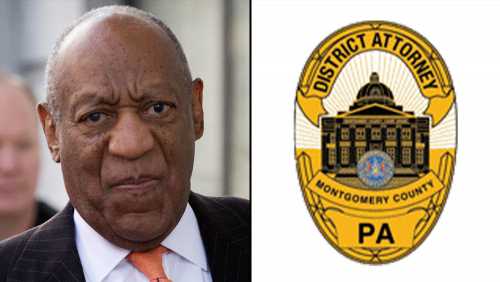 Bill Cosby is a free man today thanks to a shocking overturning of his rape conviction by the Pennsylvania Supreme Court, but the man who put him behind bars says the release doesn’t alter the reality of the once beloved actor’s crimes.

“The majority decision by the Pennsylvania Supreme Court orders the release of William H. Cosby Jr. from state prison,” said Montgomery County District Attorney Kevin Steele today a few hours after the ruling was made public.

“He was found guilty by a jury and now goes free on a procedural issue that is irrelevant to the facts of the crime,” Steel stared.

“I want to commend Cosby’s victim Andrea Constand for her bravery in coming forward and remaining steadfast throughout this long ordeal, as well as all of the other women who have shared similar experiences,” the Keystone State politician went on to say. “My hope is that this decision will not dampen the reporting of sexual assaults by victims. Prosecutors in my office will continue to follow the evidence wherever and to whomever it leads. We still believe that no one is above the law—including those who are rich, famous and powerful.”

No longer a convicted sex offender and not going to be facing a new trial, Cosby walked out of Pennsylvania’s State Correctional Institution at Phoenix about 35 minutes ago, according to law enforcement sources. He has just arrived at a nearby family home in pricey Montgomery County.

He had been found guilty in his second trial for the 2004 rape of former Temple University employee Andrea Constand. Cosby, 83, has maintained that they engaged in consensual relations.

Cosby himself has not made any comment yet after serving just over two years of what could have been a decade long stint behind bars. However, Cosby’s long-time spokesperson Andrew Wyatt, who picked up the 83-year old once known as “America’s Dad from prison on Wednesday, was very vocal.

“We want to thank the Pennsylvania Supreme Court,” Wyatt said in a statement. “This is what we have been fighting for and this is justice and justice for black America.”

“This is the justice Mr. Cosby has been fighting for,” Wyatt added. “They saw the light. He was given a deal, and he had immunity. He should have never been charged.”

Denied parole a just month ago, Cosby has been fighting the rape conviction almost since the moment he was sentenced. Coming up short time and again and even failing to get early release because of the coronavirus, the comedian finally achieved a freedom foothold in June 2020 when the Pennsylvania’s Supreme Court agreed to hear his appeal on the rape conviction.

Conducted virtually in December due to the ongoing global pandemic and with Cosby absent, the 75-minute appeal hearing centered on prior testimony from five other women during the second trial, Fifth Amendment rights and an all-important 2005 press release from the prior DA of Pennsylvania’s Montgomery County Bruce Castor. Back in the early years of the century, the then D.A.’s promise to Cosby to not press criminal charges on the assault on Constand ultimately lead to a multi-million dollar settlement with the basketball coach in a civil action.

Today’s opinion made it clear that a majority of the justices of the Keystone State’s top court  found strong shortcomings with the fact that in 2005, Castor decided not to criminally prosecute Cosby after investigating Constand’s claim. The move,  Justice David Wecht wrote in the tmajority opinion, allowed “Cosby to be forced to testify in a subsequent civil action, under penalty of perjury, without the benefit of his Fifth Amendment privilege against self-incrimination.”

“Unable to invoke any right not to testify in the civil proceedings, Cosby relied upon the district attorney’s declination and proceeded to provide four sworn depositions,” Wecht added. “During those depositions, Cosby made several incriminating statements.”

Castor’s successor and political rival Steele, Wecht noted, “did not feel bound by his decision, and decided to prosecute Cosby notwithstanding that prior undertaking. The fruits of Cosby’s reliance upon D.A. Castor’s decision Cosby’s sworn inculpatory testimony were then used by D.A. Castor’s successors against Cosby at Cosby’s criminal trial.”

The Montgomery County D.A. could appeal the vacating of Cosby’s sentence to the U.S. Supreme Court. However, as you can read today, by what isn’t in their statement, that doesn’t seem to part of the plan.

30/06/2021 Business Comments Off on Bill Cosby Walks Out Of Prison As Rape Conviction Overturned; D.A Says Release “Irrelevant To The Facts Of The Crime”
Markets