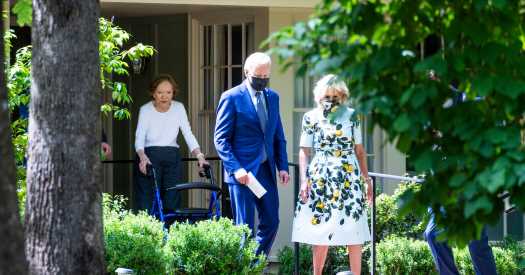 President Biden visited former President Jimmy Carter, an old friend, as he traveled to Georgia on Thursday to pitch his $4 trillion economic agenda.

A day after using his first address to Congress to urge swift passage of his plans to spend heavily on infrastructure, child care, paid leave and other efforts meant to bolster economic competitiveness, Mr. Biden held a drive-in car rally in Duluth, Ga., for his 100th day in office.

The president promoted the $1.9 trillion economic aid bill he signed into law in March and pitched the two-part plan for longer-term investments in the economy that he has rolled out over the past two weeks.

Mr. Biden, Vice President Kamala Harris and the president’s cabinet are embarking on a post-speech tour to push the economic plans through next week. Administration officials said the focus would include celebrating the increased pace of Covid-19 vaccinations since Mr. Biden took office and the rebound in economic activity.

The president will also push Congress to pass a sprawling package of tax cuts and spending programs intended to address long-running economic inequalities, create jobs and give more Americans flexibility to balance work and family. The most recent batch of plans, which Mr. Biden detailed on Wednesday, include efforts to reduce child care costs, the creation of a federal paid leave program, free community college, universal prekindergarten and expanded efforts to fight poverty.

“He and the first lady are returning to Georgia to talk about getting America back on track,” Karine Jean-Pierre, the principal deputy press secretary, told reporters as they traveled to the state.

First, though, Mr. Biden took a detour to Plains, Ga., where Mr. Carter lives with his wife, Rosalynn Carter. Mr. Carter, the longest-living former president, is 96 years old and a cancer survivor. He has remained largely out of the public view during the coronavirus pandemic, although he appeared at a parade in October for his birthday. He did not attend Mr. Biden’s inauguration in January, and the president had promised to visit him.

“This is a longstanding friendship,” Ms. Jean-Pierre said. “They said that they were going to try to see each other after inauguration.”

Mr. Biden was the first senator to endorse Mr. Carter’s presidential bid in 1976, when Mr. Carter was the Georgia governor and not considered the favorite for the Democratic nomination. Mr. Biden recalled that endorsement as part of a brief video message he taped this month for the film crew behind “Carterland,” a documentary on the Carter administration.

“Some of my colleagues in the Senate thought it was youthful exuberance,” Mr. Biden said in the video. “Well, I was exuberant, but as I said then, ‘Jimmy’s not just a bright smile. He can win, and he can appeal to more segments of the population than any other person.’”

In the message, the president hailed Mr. Carter’s work in office and after his defeat to Ronald Reagan in 1980, praising Mr. Carter for working to eradicate disease and house the poor while still finding time to teach Sunday school. Mr. Biden said Mr. Carter had called him the night before his inauguration to wish him well and say he would be there in spirit.

“Simply put,” Mr. Biden told Mr. Carter and Mrs. Carter at the end of the video, “we love you, and God bless you both.”

The visit between the two families on Thursday lasted less than an hour. Mr. Biden’s motorcade arrived at the Carters’ home from Jimmy Carter Regional Airport at 2:30 p.m. A pool reporter glimpsed Mrs. Carter, in a white top and using a walker, on the front porch. There was no sign of Mr. Carter.