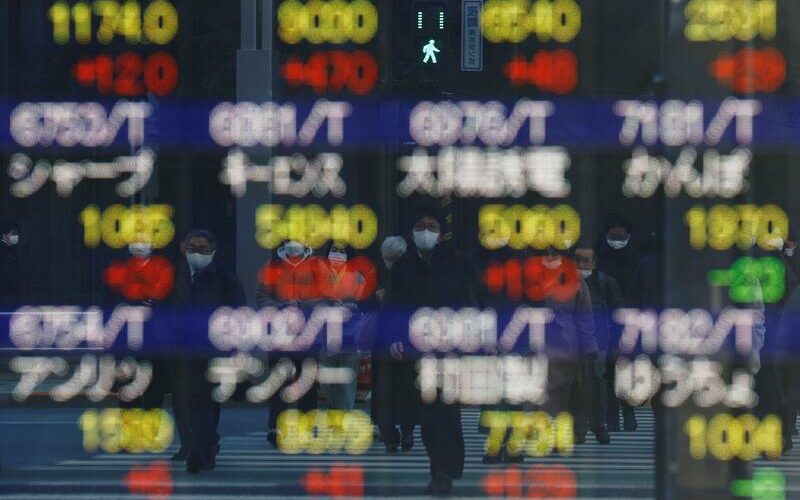 HONG KONG (Reuters) – Asian shares were mostly in negative territory while the U.S. dollar held strong on Tuesday ahead of U.S. inflation data which could foreshadow even more aggressive interest rate hikes from the Federal Reserve.

Treasury yields spiked to a three-year high, while oil prices jumped after a partial easing of lockdowns in Shanghai.

MSCI’s broadest index of Asia-Pacific shares outside Japan was down 0.2%, after U.S. stocks ended the previous session with mild losses, while Japan’s Nikkei stock index slid 1.79%.

Australian shares were down 0.57%.

The Japanese currency bore the brunt of the losses against the greenback, which rose to 125.77 yen overnight, its highest since June 2015.

It traded choppily just below that level on Tuesday and was last at 125.45 per dollar.

The yen has been under the gun over recent months as the Bank of Japan has committed to maintaining ultra-easy policy even as many other major central banks, led by the Fed, have embarked on tightening monetary conditions.

The euro was buffeted by politics, unable to hold onto gains from its mini-relief rally on Monday after French leader Emmanuel Macron beat far-right challenger Marine Le Pen in the first round of presidential voting.

China’s markets gained ground as signs emerged that some of the COVID-19 restrictions were starting to ease in Shanghai, the country’s financial capital, though dozens of other cities remain in partial or full lockdowns..

An easing of China’s regulations on the gaming sector also gave investors heart after a multi-year crackdown on parts of the country’s technology industry.

China’s bluechip CSI300 Index dipped into negative territory mid-session Tuesday but roared back in the afternoon to be up 1.41%, which analysts attributed to the gaming restriction changes

“The next few days and weeks in China is going to be challenging, COVID cases are still going up, but investors should not be focused just on COVID,” said Suresh Tantia, a Credit Suisse strategist.

“The big story for China though is political easing and tech regulations starting to subside. Tech stocks have bounced today and we think there will be more policy easing so there is a situation where China will be easing when the rest of the world is tightening.”

Economists polled by Reuters forecast the U.S. consumer price index (CPI) on Tuesday would post an 8.4% year-over-year increase for the month.

NatWest Markets economists predict a 1.1% month-on-month jump in the headline inflation figure which would be the largest monthly gain since June 2008.

“We’re quite hawkish in terms of U.S rate hikes and we think it’s not just the amount of tightening but the pace which is going to impact investors,” Elizabeth Tian, Citigroup’s equity derivatives director in Sydney told Reuters.

“Equities markets have been very resilient and quite relaxed compared to the fixed income markets, but we’re expecting at the Fed’s May meeting there will be some kind of announcement in term of quantitative easing tapering and that is when we could see the volatility emerging in equities.

“The question is going to be how do markets react to the velocity of rate hikes we could see.”

The two-year yield, which rises with traders’ expectations of higher Fed fund rates, touched 2.539% compared with a U.S. close of 2.508%.

12/04/2022 Business Comments Off on Asia stocks mixed, dollar strong as markets on edge ahead of U.S inflation data
Markets