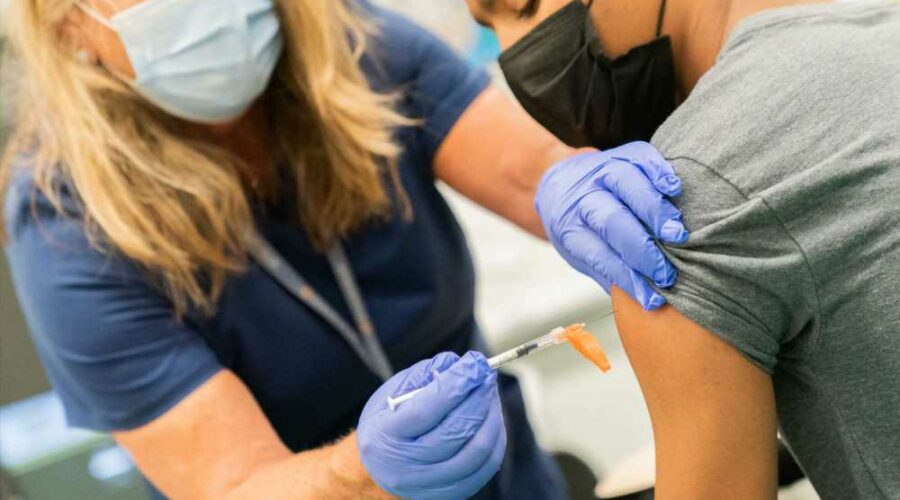 Companies from CVS Health to Tyson Foods to Walmart have adopted vaccine mandates for workers, a reflection of the fact that many C-suite executives still fear how any further Covid outbreaks could impact business.

Chief financial officers view a Covid-19 outbreak as the biggest external risk factor that their businesses face, according to the CNBC Global CFO Council survey for the fourth quarter of 2021.

It is the second straight quarter in which Covid-19 was ranked as the biggest external risk factor by members of the CNBC Global CFO Council, who represent some of the largest public and private companies in the world. The fourth-quarter survey was conducted from September 20-29 and includes responses from 35 members of the Council.

In the first two quarters of 2021, members of the CNBC Global CFO Council ranked cyber attacks and inflation, respectively, as their biggest external risk factors. Those concerns came alongside Colonial Pipeline paying a $5 million ransom after cybercriminals hacked its IT network in June, and the continued supply chain issues that have impacted seemingly all industries.

U.S. President Joe Biden has focused on vaccine mandates amid the surge of the Delta variant. Last month, Biden ordered effectively all federal workers and contractors to be vaccinated and called for private employers with 100 or more workers to require employees to be vaccinated or tested weekly.

That mandate would cover 100 million U.S. workers and will apply to about two-thirds of all U.S. employees, according to the White House.

Many companies have adopted Biden's mandate, with many telling workers that they would be fired if they did not comply. The CNBC survey finds a majority of U.S. CFOs (80%) saying they "totally support" the Biden administration's mandate, while less than a quarter (15%) said they totally oppose it.

IBM told U.S. employees this week that they must be fully vaccinated by Dec. 8 or face an unpaid suspension.

"As a federal contractor, it is a business imperative for IBM to comply with this mandate," the company said in a memo sent to employees this week. "In light of this requirement, the policies of many of our clients and partners, and the easy access to vaccines around the country, we will now require all IBM U.S. employees to be fully vaccinated by December 8, 2021, in order to work at IBM."

American Airlines, Alaska Airlines and JetBlue Airways have all ordered employees to be vaccinated following Biden's mandate, while United Airlines told its 67,000 U.S. employees in August that they needed to be vaccinated by the fall or face termination. The company said last week that just 320 employees had not done so.

JetBlue staff "will be required by the government to be fully vaccinated for COVID-19 to continue performing their role," JetBlue's CEO Robin Hayes and COO Joanna Geraghty said in an employee email.

Tyson Foods, which has more than 120,000 workers in the U.S., announced that it would be imposing a vaccine mandate in early August. The company said that more than 90% of its workforce has now been vaccinated, with that figuring doubling in the last two months.

On Wednesday, U.S. Centers for Disease Control and Prevention Director Rochelle Walensky said cases and hospitalizations have edged down on average over the last week across the country, but deaths, which is viewed as a lagging indicator, are stable at 1,400 per day. More than 700,000 Americans have died from the pandemic.

The push for vaccine mandates comes as companies of all sizes still have concerns over their ability to bring in the workers that they need.

Forty-five percent of the U.S. CFOs surveyed said that labor market irregularities are a bigger concern to them right now than inflation or supply chain disruptions. That figure has stayed steady over the last two quarters.

Job openings have outnumbered the amount of unemployed people in the U.S.

Supply chain issues have hit industries ranging as wide as booksellers to pumpkin patches. The backup at the Port of Los Angeles, the busiest cargo port in North America, has caused container ships to wait more than 10 days on average to unload cargo.

Companies like Nike and McCormick & Company have recently said that supply chain issues are hurting their businesses.

"We've already lost 10 weeks of production, and that gap will continue. … It's going to take several months to ramp back to full production," Friend told analysts. Roughly 80% of Nike's footwear factories in southern Vietnam are closed as the government attempts to address the spread of Covid-19, he said.

Over 80% of Asia-based CFOs responding to the CNBC survey said Covid was the biggest external risk.

"Across our business right now, the supply chain is really our limiting factor. Demand is extraordinarily high for all of our products both on the consumer side … but also for our flavor solutions and flavor systems business," McCormick & Company CEO Lawrence Kurzius said in an interview on "Mad Money."

"Transportation and logistics issues, just getting the product from point A to point B, is our single limiting factor," Kurzius said.