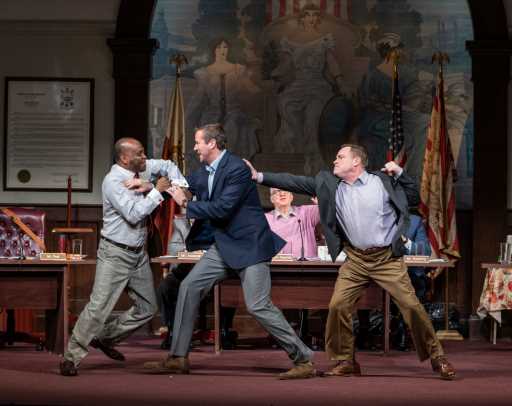 Armie Hammer has withdrawn from the planned 2022 Broadway production of Tracy Letts’ The Minutes, producers confirmed today. The news is the latest hit to Hammer’s career in the wake of sexual misconduct allegations and an LAPD rape investigation.

“I have loved every single second of working on The Minutes with the family I made from Steppenwolf. But right now I need to focus on myself and my health for the sake of my family. Consequently, I will not be returning to Broadway with the production,” Hammer said in a statement.

The production team, led by producer Jeffrey Richards, released the following statement: “Armie remains a valued colleague to all of us who have worked with him onstage and offstage on The Minutes. We wish only the best for him and respect his decision.”

The Minutes, a political comedy directed by Anna D. Shapiro, was in previews on Broadway just as the Covid shutdown hit, with its original opening night of March 15 2020 canceled and later rescheduled for March 2022 at a Shubert Organization venue to be determined.

The Minutes chronicles the inner workings of a city council meeting and the hypocrisy, greed and ambition that bubble to the surface when a newcomer to the small town of Big Cherry starts to ask the wrong questions: Why is someone on the council mysteriously missing? Why are the minutes from the last meeting being kept secret?

A Pulitzer Prize finalist in 2018, Steppenwolf’s The Minutes received critical praise for its 2017 Chicago engagement, with the Chicago Tribune describing it as “part Parks & Recreation, part Twilight Zone.”

Hammer recently was replaced by actor Dan Stevens in the Julia Roberts-Sean Penn Starz Watergate drama Gaslit. In February, Hammer was dropped by WME after he had already exited the Jennifer Lopez film Shotgun Wedding.

Hammer has denied the allegations.