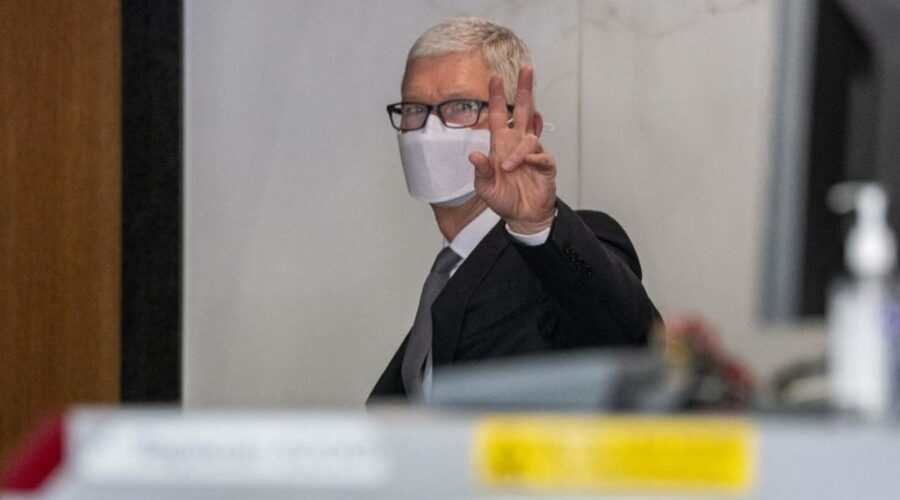 Regulators and rivals, through the courts, have recently been lining up to give Apple’s App Store the bash, with Google’s app store for Android devices, Play, often getting flak as well.

Today, Apple hit back, issuing a blizzard of stats and case studies that it says suggest consumers will be preyed on and exploited if it is forced to accept “sideloading”- or users being able to download an app to their iPhone or iPad from any website, or a third-party app store.

First, a quick recap of how this scrap has been developing.

Apple takes a 30 per cent cut on most sales via its App Store – a US$500-plus billion market used by more than a billion people worldwide as the only avenue for downloading new apps to their iPhone or iPad.

The App Store was already the subject of a US Justice Department probe when Epic Games pulled its hit Fortnite game from the platform, objecting to Apple’s clip of the ticket, and its rules around in-game purchases.

A high-stakes court case brought by Epic against Apple wrapped up in May, although the verdict is not till August.

Earlier, in April, the European Commission issued charges – which could ultimately lead to a fine of up to US$27 billion, alleging that Apple’s dominant position and 30 per cent cut – dubbed the “Apple tax” by critics – resulted in higher prices for consumers.

Across the Tasman, the Australian Competition and Consumer Commission (ACCC) has opened an investigation into Apple and Google’s app stores (our Commerce Commission, as ever, is keeping a watching briefing).

Apple has already taken one pre-emptive step to head-off a regulator, or court, forcing it to make changes to the App Store, or how users can download apps.

In November, as Epic yanked Fortnite from the App store (a move that was estimated to cost it around US$1b of revenue per year), Apple said it would halve its App Store commission to 15 per cent – at least for companies that generate less than US$1 million ($1.4m) in sales through its platform, including in-app purchases. Google halved its Android commission soon after.

While fully aware of the commercial politics behind the move, local app developer Peter Frampton – the one-time TV weather graphics maker who bought a new house in the Hawke’s Bay on the back of his hit games Chopper and The Blockheads – told the Herald that Apple’s move was a big win for Kiwi app makers, many of whom qualify for the new, halved commission, with some notable exceptions like Ninja Kiwi.

Epic Games, of course, sails way beyond the US$1m threshold, and pressed ahead with its legal action in the US, supported by high-profiles allies such as Airbnb and Spotify.

Today, in a virtual media briefing, Apple put the case for retaining its App Store’s near-total monopoly on what apps we can, or can’t download to our devices (there are two exceptions, one that can be used by professional software developers, the other by large companies with a corporate licence).

It did not use the “m” word, of course, but did frame the App Store as a safe haven in a world of malware, scams and covert tracking.

The company said that a number of its recent security and privacy initiatives, including its recent moves to force app maker to disclose if they tracked a users’ online habits, and gain informed consent, could not be policed in a world of side-loading.

Critics, including Facebook CEO Mark Zuckerberg, say it should be up to each country’s regulators and law enforcement agencies to set and enforce rules over app labelling (although one of our watchdogs, Privacy Commissioner John Edwards, has strongly backed Apple’s proactive stance).

Apple said it screens all apps before they are approved for its app store and, while rogue software does get through, the company said it removes apps that violate its policy, or won’t provide a refund for over-the-top in-app purchases (so-called fleeceware) or in instances where, say, a child has been able to make in-app purchases without a parent’s okay. If necessary, Apple will step in and issue a refund itself.

To enforce its point about a potential Wild West, Apple offered stats about the number of rogue apps that had tried to wheedle their way into its own app store, or had to be removed for policy violations during 2020.

• Nearly one million “problematic” apps and a “similar number” of updates were rejected or removed last year – 150,000 for being spam or copycats, 215,000 for breaching privacy guidelines, 48,000 for hidden features and 95,000 for bait-and-switch or other fraud

Of course, we’re all familiar with a world where apps can be downloaded from anywhere. Most of us install software on our PCs, or Macs, from a wide variety of websites, and Android already allows sideloading – which allowed a workaround for Huawei after US sanctions barred the Chinese smartphone maker and its customers from full access to Android and Google’s Play store. However, consumers acclimatised to official app stores have found it a bit daunting and Huawei phone sales have fallen off a cliff in NZ.

Apple says it’s fully aware its Mac users have a less secure app-install experience, and are more targeted by scammers, which is one of the reasons it opposes sideloading in the iPhone and iPad markets. And it quotes a 2020 Nokia Threat Intelligence study that found Android owners suffer 15 times more malware infections than iOS users.

Further, Apple argues that if sideloading is thrust on it, some of its customers might want to stay within the walled garden of its App Store, but be forced to download apps from other sources if their workplace or social circle snubs the App Store.

And, lastly, Apple argues that while its App Store is big, Google’s Play store is bigger, and already provides a market option for those who want to sideload.

That’s Apple’s pitch. We’ll find out whether courts and regulators buy it later this year … before we go into the first round of what could be years of appeals.