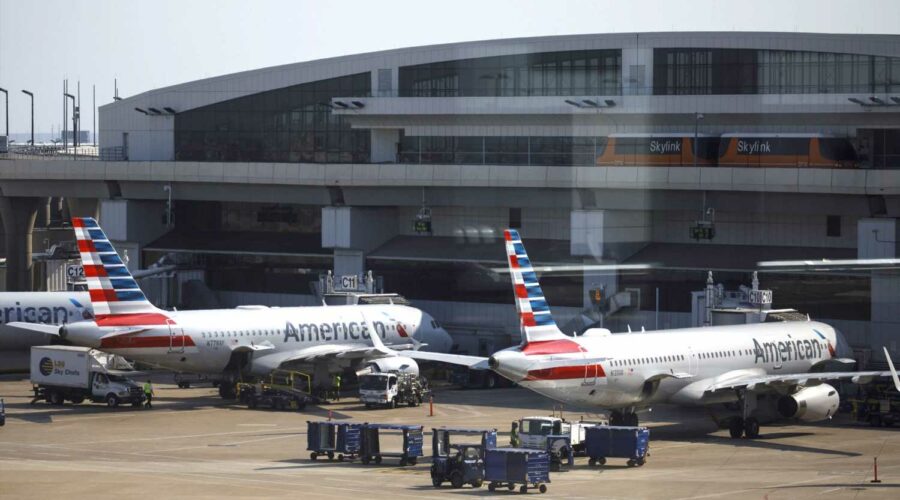 American Airlines passengers faced hundreds of cancellations and delays on Monday, as the carrier struggled to recover from disruptions caused by severe thunderstorms that swept through its Dallas/Fort Worth International hub.

Fourteen-percent — or 417 of American's mainline flights — had been canceled as of Monday afternoon, according to flight-tracking site FlightAware. Meanwhile, 600 additional flights were delayed. On Sunday, American canceled 283 flights and delayed 947.

Travelers complained on social media about long hold times for customer service and extensive delays. Earlier on Monday, a ground stop — which holds planes at their origin — was in place for Dallas Fort/Worth International Airport.

The cancellations were fewer than airlines generally scrub during a winter storm or a hurricane. But airlines often do that days ahead to avoid stranding passengers at the airport. Thunderstorms can be especially disruptive for passengers and airlines alike because they are less predictable and often lead to rolling delays.

On top of that, airlines are struggling to staff up to handle a surge in travel demand after urging employees to take buyouts or leaves of absence to cut labor costs in the pandemic last year.

An American Airlines spokeswoman said the weather and air traffic constraints caused the delays at DFW. At least 30 of the cancellations were due to a lack of crew, according to an internal list, which was reviewed by CNBC.

American had trimmed about 1% of its schedule for the first half of July to handle weather and other disruptions as well as staffing issues.

But the carrier has restored more capacity that some of its competitors like United Airlines and Delta Air Lines.

"And we expect to fly a larger domestic network at DFW this August than we did in August of 2019," American's President Robert Isom said on a quarterly call last month.

Airlines are not required to provide hotel accommodation or food vouchers for travelers whose flights are canceled, according to the Transportation Department.

"Passengers understand that airlines don't control the weather but the mark of a good airline is how it treats passengers when the chips are down," said Henry Harteveldt, founder of travel-industry consulting firm Atmosphere Research Group and a former airline executive.

More than 730 Dallas-based Southwest Airlines flights, a fifth of the schedule, were delayed on Monday, while 44 were canceled. The carrier said the thunderstorms from Sunday sparked the cancellations early Monday.

Spirit Airlines on Monday also canceled 271 flights — more than a third of its daily operation — followed by 165 flights a day earlier, according to FlightAware.

A spokesman said the disruptions were due to "operational challenges" triggered by weather. Airlines will often cancel flights to get crews in place rather than continue to delay flights.

"We're working around the clock to get back on track in the wake of some travel disruptions over the weekend due to a series of operational challenges," the airline said in a statement. "We understand how frustrating it is for our Guests when plans change unexpectedly, and we're working to find solutions. We ask Guests to actively monitor their emails and flight status before heading to the airport."