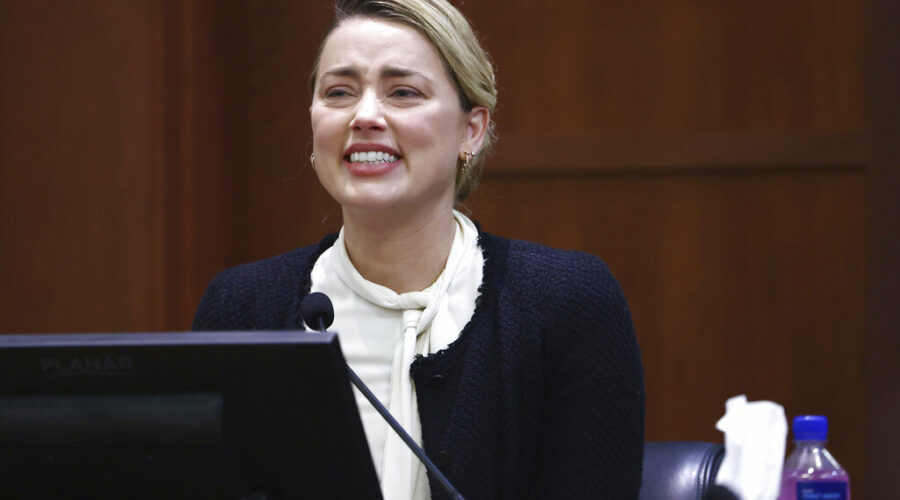 Amber Heard alleged more instances of physical abuse by Johnny Depp, painting a picture of a dream relationship turning into a nightmare as the actor descended into drug and alcohol binges.

Just before a morning break on Thursday, the jury listened to an audio recording that Heard said she took of Depp on a May 24, 2014 private flight from Boston, in which Depp is heard moaning. At the time, Heard said, he had locked himself in the bathroom at “started howling like an animal.”

Heard said that she started recording because “in my experience, when Johnny was that inebriated, he would not remember what was done.”

Depp is suing Heard for $50 million over a Washington Post op ed she wrote in 2018, in which she said that she had become “a public figure representing domestic abuse.” Depp denies her claims of domestic abuse.

How To Watch The Johnny Depp-Amber Heard Trial: Heard Back On Stand

Heard, who has countersued, took the stand on Wednesday, and has since been going through a narrative of their relationship, describing instances where Depp was emotionally a physically abusive to her.

On the May, 2014 flight, she said, Depp was upset that she was doing a movie with James Franco, whom he despised, and that she had a love scene with him. At one point on the flight, Depp started throwing ice cubes and utensils at her, “talking about what an embarrassment I am.” She said that she tried to avoid engaging with him, but “Johnny came to me each time.”

“I was looking out the window and he slaps my face,” Heard said, looking at the jury most times as she testified.

She said that a friend was in close proximity, and although the slap “didn’t hurt me,” “I as just embarrassed that he would do that in front of people.”

Then, she said, as she went to move to the front of the plane, she turned away and “I feel this boot in my back. He just kicked me. … I thought to myself. ‘I don’t know what to do.’ No one said anything. No one did anything. I felt so embarrassed that he could do that in front of people.”

Heard also described an incident earlier that month, when they both attended the Met Gala. She said that at the dinner, Depp thought she was “looking at this woman in a sexual way.”

In their hotel room afterward, she said, Depp shoved her and grabbed her by the area around her collar bone. She said that she then shoved him back, and “he threw a bottle at me. It missed me but broke the chandelier.” She said that they then had a struggle in the living room and he shoved her down on a sofa “and at some point he just whacks me in the face.”

“I suspected I had a broken nose. Other than that I was relatively unscathed,” Heard said. As it turned out, she said, her nose was discolored.

Depp again did not make eye contact with his ex-wife and instead looked down and appeared to be writing.