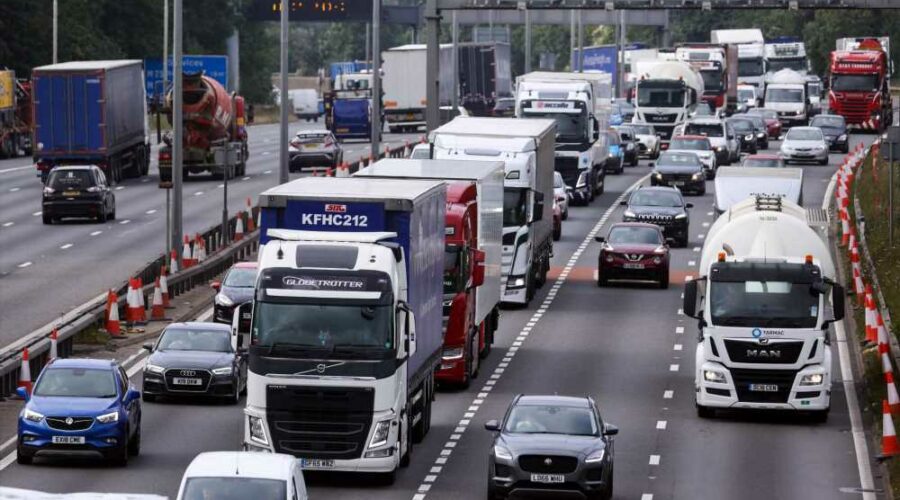 LONDON – The truck driver shortage plaguing the U.K. is not just a British problem, experts say, with the wider continent also facing a shortfall and potential supply chain problems.

There was more than a whiff of "schadenfreude" (or enjoyment from the woes of others) in mainland Europe last week as the U.K. faced a petrol crisis. There were long lines of cars outside British gasoline stations and even fights on forecourts as panic buying spread across the country amid a shortage of truck drivers able to deliver fuel.

Brexit was named as one of the key reasons for the shortage of heavy goods vehicle (HGV) drivers, although problems in the industry go deeper and are found across Europe, industry experts noted. A survey of 616 industry figures in June by the Road Haulage Association found that retiring drivers, changing working rules, the Covid pandemic, low pay and drivers leaving the industry were among the reasons for the lack of drivers.

The association, which has been warning of a driver shortage for months, says the U.K.'s HGV driver shortfall stands at 100,000 currently; pre-pandemic, there was an estimated shortage in excess of 60,000 drivers.

Elsewhere, supply chain issues came to the fore in Britain during the pandemic, with truckers unable to enter or exit the country easily, causing long queues at ports and borders and leading to some shortages of food and medicines.

Such problems have continued as the pandemic has eased, however, revealing the challenges of Brexit and the U.K.'s new trading relationship with the EU. Experts and industry leaders say they had warned the government of the consequences of Brexit's impact on the country's workforce, with several key industries reliant on European workers, such as agriculture, healthcare and haulage. Not being able to attract seasonal staff is a particular concern for farmers who say they are facing situations where crops cannot be harvested or livestock processed due to a lack of experienced workers.

The rest of Europe is watching the U.K.'s supply chain issues and workforce shortfalls with interest, particularly given the recent bitter divorce between the U.K. and EU following Brexit.

French journal Liberation headlined its late September issue with a reflection on the consequences of Brexit, ranging from the departure of much-needed European workers (which is not just being felt in the HGV industry, but also in in sectors such as agriculture) to its supply chain crisis.

Meanwhile, the opportunity was not lost on Olaf Scholz, who could be Germany's next chancellor, to remind Brits that they had voted for Brexit and so could not expect the benefits of belonging to the EU.

"The free movement of labor is part of the European Union and we worked very hard to convince the British not to leave the union. They decided different and I hope they will manage the problems coming from that," Scholz said, adding that pay and working conditions could also be exacerbating Britain's problems.

The U.K. is not alone when it comes to driver shortages, however, and experts warn that parts of continental Europe could also face its own trucker shortfalls soon enough.

"We're not in as dramatic and desperate situation yet, but it might come," Frank Huster, director general for the Federal Association for Freight Forwarding and Logistics Germany, told CNBC on Thursday.

He noted that while Brexit has "certainly had an impact" on the U.K., the wider European haulage sector faced a long-standing problem with a lack of workers.

"The logistics sector lacks qualified personnel such as lorry drivers but also trained locomotive drivers , inland navigation workers, terminal workers, as well as management people … We have less and less people to work in Western markets," he added.

Analysis company Transport Intelligence published research in August looking at "European Driver Shortages" in which it assessed the severity of the shortfalls in various European countries, a problem it said had been growing over recent years. It estimated that across Europe the total shortfall of drivers now surpasses 400,000, with the most heavily impacted European countries being Poland, the U.K. and Germany.

John Manners-Bell, CEO of Transport Intelligence and an expert on global supply chains and logistics, said that the industry has been warning governments of shortages for many years.

In an editorial last week he said that "disruption to supply, rising prices, reports of empty shelves and – most recently – the fuel crisis, have shone a spotlight on the industry. Long-term structural problems have been laid bare by a perfect storm of post-Covid demand volatility, infrastructure failings, bureaucracy, Brexit and dismal pay and conditions."

"Factors such as delays to HGV testing; inefficiency in processing licenses; an ageing workforce and insufficient numbers of new recruits, due to working conditions and image issues of the profession, have been plaguing the industry for many years," he added.

Manners-Bell said he hoped the current crisis would bring about positive changes in the industry, noting that "it is time that all stakeholders in the sector – industry associations, the government, operators and shippers – throw their support behind plans to make road freight transport fit for purpose as a driver for sustainable economic growth."

The U.K.'s experience in recent weeks shows that it does not take long for the public to start panic buying at the first sign of a potential shortage — and the British government's appeal to Brits not to panic buy petrol appeared to have the opposite effect.

At the weekend, shortages were reported to have eased in most parts of the U.K. except in London and the southeast.

Members of the British army are delivering fuel to garages from Monday to alleviate the shortage of drivers. Government officials have also announced a set of measures to try to strengthen the industry in the busy run-up to Christmas, including the relaxation of visa rules to allow overseas fuel tanker drivers to be able to work in the U.K. immediately and an increase in HGV license testing. The government also said last week in a statement that almost one million drivers who currently hold an HGV driving license would be contacted to encourage them back into the industry.

Kallum Pickering, senior economist at Berenberg Bank, said that the U.K.'s "fuel crisis is a warning sign" and is not just a British problem.

"The fuel crisis seems to be caused not by a lack of petrol or diesel but by a shortfall of heavy goods vehicle drivers relative to the very high demand for transporting goods. Daily data on heavy goods vehicle usage shows that recent activity is broadly in line with the pre-pandemic level. Nevertheless, it did not take long for panic buying to start once a few petrol stations reported low stocks due delayed fuel deliveries," he said in a note Monday.

"The shortage of drivers is not just a U.K. problem – the U.S. and other major European economies also face structural shortages, albeit on a smaller scale as they do not suffer from the U.K.'s unique Brexit disruptions."

04/10/2021 Business Comments Off on After causing chaos in the UK, truck driver shortages could soon hit the rest of Europe
Markets