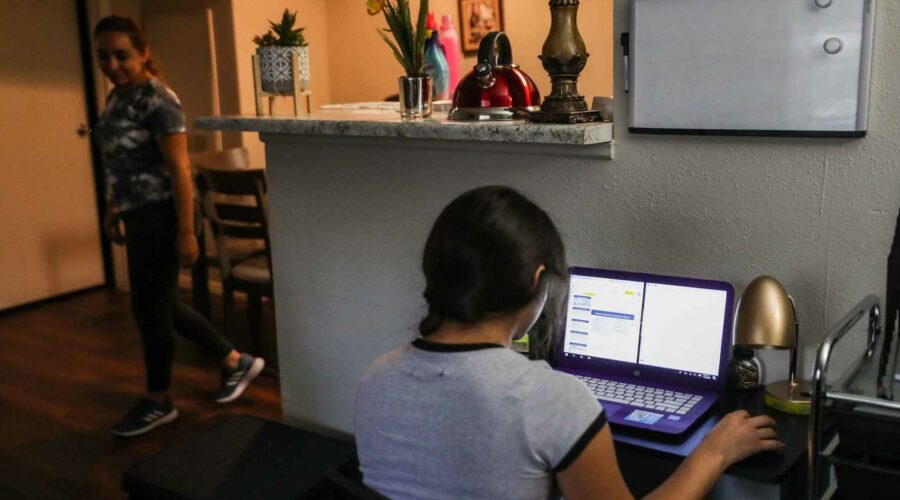 During the throes of the pandemic, many parents, weary of monitoring their children’s online classes, yearned for schools to reopen.

As fall approaches, many schools are ending virtual programs and trying to return children to classrooms five days a week. New York City, the nation’s largest school district, eliminated remote options for next year. New Jersey’s governor announced schools must fully open in fall with no remote learning. Illinois public schools must do the same for almost all students, the state board of education voted last month.

South Carolina passed a law requiring public schools to offer full-time instruction this fall. Five days later, the Senate modified its version of the budget bill to cut state money from districts with more than 5% of their students in virtual programs this fall.

Many education experts say in-person instruction is the best way to help hasten an academic recovery for those who fell behind, and to address emotional and social issues after two disrupted school years. But the orders may deny many families, especially parents of color, the choice to continue an education style they say was working for them.

Jaqueline Avina, 15, checks her homework for the week from her school at home in Austin, Texas, in May as her mother, Alma Vargas, does chores. (Photo: LOLA GOMEZ / AMERICAN-STATESMAN)

The problem is achievement. While some students thrived amid the flexibility of learning from home, many others failed to log on or experienced a spike in failing grades last fall after most districts nationwide started the year remotely.

Alarming signs: Students are falling behind in online school. Here’s why.

The racial divides between where and how children were learning this spring were stark: Just over half of Black and Latino eighth graders nationwide were enrolled in fully remote programs in March, compared with 24% of white eighth graders, the most recent government data show.

“There’s no replacement for in-person learning,” Ian Rosenblum, acting assistant deputy secretary at the Department of Education, said this month. He was talking about how schools should spend a record $122 billion in additional federal COVID-19 recovery money. States’ plans for how their schools will spend that money are due to the department on Monday.

Kindergarten students return for the first day of in-person learning at Maurice Sendak Elementary School in Los Angeles on April 13, 2021. Most large districts in California didn't reopen for in-person instruction until the middle of April — more than a year after the pandemic shuttered buildings. (Photo: Jae C. Hong, AP)

States are allowed to spend their money on virtual schooling, if schools believe that’s the best way to help certain children recover — and some, such as schools in Miami and Des Moines, Iowa, are doing so.

Cash flow: Schools are getting big money under COVID-19 stimulus. Will it help kids who need it most?

But the major thrust is to return students to classrooms. Andsome Black parents and those who advocate for them feel their desires are being drowned out of the discussion.

“I’m concerned about pushing kids back into schools when their parents don’t want them to go, without a real plan about how we’re going to do business better for them in-person,” said Lakisha Young, co-founder and CEO of The Oakland REACH, a nonprofit that works with Black families on education issues in Oakland, California.

“We end up inadvertently doing more damage around Black and brown families by saying, ‘It doesn’t matter they’re choosing to keep their kids at home. The data indicates they’re failing.’ But under what circumstances?”

Students and educators discuss what surprised them the most about virtual and hybrid learning.

Are we measuring the right things?

That question gets to the heart of a new survey of American teachers and principals by the RAND Corporation, a nonprofit research institution.

Virtual students got through less material and received less instruction in English, math and science this year compared with students at schools that operated mostly in person, the survey results show.

And 1 in 3 principals at the mostly remote schools reported changing grading policies so more students’ F grades would instead be logged as “incomplete.”

But that doesn’t tell the whole story, said Julia Kaufman, who led the RAND study.

“Students who were in schools operating mostly remotely were kids who were more likely to be behind academically coming into virtual learning,” Kaufman said.

First Lady Jill Biden speaks with a student as she tours Benjamin Franklin Elementary School in Meriden, Conn., on March 3, 2021. She was visiting to help reassure school districts they can reopen safely during the pandemic. (Photo: MANDEL NGAN, POOL/AFP via Getty Images)

Many urban districts, which have large populations of low-income students of color, were slower to reopen than smaller and wealthier schools, which serve more white, middle-income students.

“On average, students at schools that were mostly remote were more likely to have been disadvantaged in the past,“ Kaufman said. “It makes it hard to interpret the poor results of remote learning, or to say remote learning, on its own, is bad.”

Whether in-person or virtual, most schools are not designed to support students of color, said Kimberly Smith, the executive director of the League of Innovative Schools, an education innovation effort under the nonprofit Digital Promise.

And, she added, students of color may have excelled online in ways not captured by traditional achievement measures, such as building confidence learning from home, feeling more freed from bias, racism or bullying in class, and developing interests in personal projects.

Back at the Oakland REACH, Lakisha Young said she’d like to see districts talk to families about what they liked about remote learning or what elements did or didn’t work well for them this year, so district leaders can improve the experience.

In Massachusetts, a recent survey about how federal recovery money should be spent showed 70% of parents wanted their child to learn in person this fall. But among Black parents, only 54% preferred full in-person learning; another 29% preferred hybrid learning and 12% preferred staying remote.

“Parents of color have been consistently less enthusiastic about in-person school,” said Steve Koczela, president of the MassINC Polling Group, the nonpartisan public opinion research firm that conducted the survey.

How some schools are improving virtual learning

Some districts are committed to keeping a virtual option next year — with modifications to help more students succeed.

Miami-Dade County Public Schools was one of the first large districts to reopen classrooms this past fall, precisely because leaders were detecting major academic regression during virtual learning, said Alberto Carvalho, district superintendent.

Teachers, principals and even Carvalho himself chipped in to convince the parents of almost 10,000 students to return to class because their progress was suffering. But the year still ended with about half of Miami-Dade’s 350,000-plus students learning remotely.

The daughters of migrant worker Claudia Landeros returned to in-person school in Florida City, in Miami-Dade County, because their grades were dropping while they were in virtual school, Landeros said. (Photo: Miami-Dade public schools migrant program)

Most families in are low-income, and many worried about safety and health care costs, should someone in their family get sick, Carvalho said.

Anticipating many parents would want to continue virtual learning this fall, Miami-Dade leaders decided to keep this year’s virtual program and create a new one with more guardrails and supervision. Miami-Dade Online and Miami-Dade Virtual Academy will be independent schools with their own staff. But Online students will have less live teaching and more independence, while Virtual Academy students will be online with a live teacher for larger portions of the school day.

“The learning slide has been significant here and across the country,” Carvalho said. “But after a year and a half of parents having a front-row seat to see what their child was doing at school, online, we can’t necessarily rob them of choices now.”

In Iowa, Des Moines Public Schools, with about 32,000 students, is expanding online schooling this fall by offering it to middle school students. Before the pandemic, it was only an option for high school students. The district will use its federal COVID-19 relief money to pay for the expansion.

In Rowan County, North Carolina, the Rowan-Salisbury school system, with about 18,000 students, launched a virtual academy for elementary and middle school students last summer. It was something the district had considered for years, but COVID-19 “catapulted” the project, said Tina Mashburn, assistant superintendent for professional and virtual learning.

Last August, enrollment in the district’s new Summit K-8 Virtual Academy shot up to 3,000 students. The district will continue the virtual school this fall, which has more than 700 students enrolled. Most students drifted back to their brick-and-mortar schools.

Starting in the fall of 2022, students who wish to stay in the virtual option will have to demonstrate a minimum number of passing grades and consistent attendance, Mashburn said.

Most districts are trying to drop many of the hybrid models employed this year, where students learned at school some days of the week and at home on others.

Also kicked to the curb, from Rowan-Salisbury to Miami-Dade and beyond: teachers instructing students online and in-class at the same time. At most districts, virtual programs will have dedicated virtual teachers. Teachers back in their regular classrooms will have only in-person students.

“I work as an adjunct professor, and even I couldn’t do that kind of simultaneous teaching very well,” Mashburn said.

05/06/2021 Business Comments Off on After a tough year, schools are axing virtual learning. Some families want to stay online.
Markets