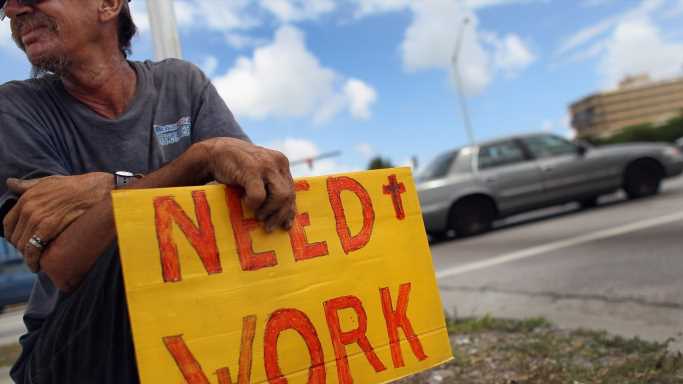 The U.S. economy appears to be recovering from the pandemic-induced recession faster than many experts anticipated. According to the most recent jobs report from the Bureau of Labor Statistics, the U.S. added 943,000 jobs in July, considerably more than the 845,000 expected by the economists surveyed by Dow Jones, and the largest single month increase in nearly a year. The report also revised job gains in June from 850,000 up to 938,000.

Strong national job growth in recent months has pushed the unemployment rate down to 5.4%, the lowest level since the beginning of the pandemic. Still, job growth has not benefited all parts of the country equally. In areas where the economy has been struggling long before the pandemic, as well as those where jobs have been slow to come back, local unemployment rates are more than double the current national rate.

Using monthly unemployment from the BLS, 24/7 Wall St. identified the 51 counties and county equivalents, such as independent cities, with the highest unemployment. Counties are ranked by the June 2021 unemployment.

In addition to high unemployment, the counties and county equivalents on this list typically have other indicators reflecting struggling economies. For example, most of these areas have large populations affected by poverty. In all but a handful of these areas, the local poverty rate far exceeds the 13.4% national rate. Here is a look at the poorest counties in every state.

The counties on this list also tend to have relatively small college-educated populations. According to the BLS, the average unemployment rate among labor force participants with a bachelor’s degree was 5.5% in 2020. Meanwhile, 9.0% of those in the labor force with no more than a high school diploma were unemployed that year. Only one county on this list has a bachelor’s degree attainment rate higher than the 32.1% national average. Here is a look at the least educated county in the United States.

Click here to see the 51 counties with the highest unemployment.

To identify the 50 counties with the highest unemployment, 24/7 Wall St. reviewed data on unemployment from the Bureau of Labor Statistics Local Area Unemployment Statistics program. Counties and county equivalents were ranked based on unemployment rates for June 2021. Current and historical unemployment data are not seasonally adjusted. Supplemental data on poverty and educational attainment came from the U.S. Census Bureau’s 2019 American Community Survey.