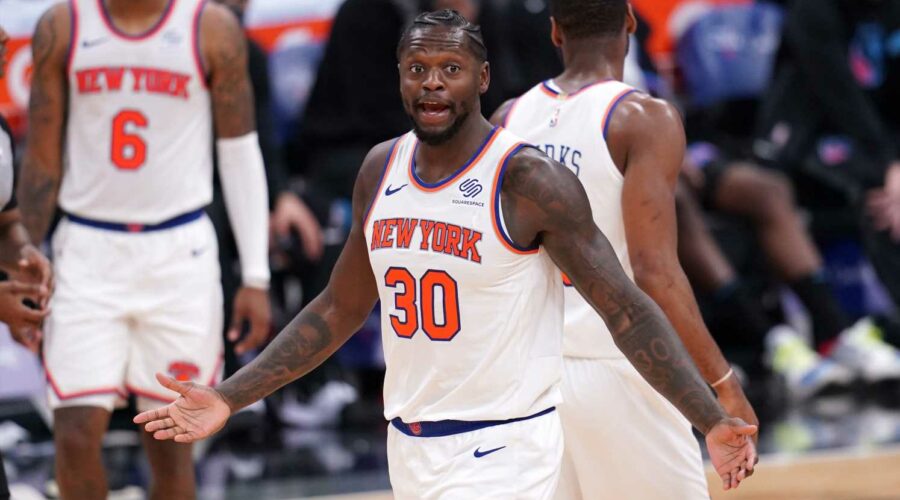 Don't look now, but the New York Knicks finally seem to be headed in the right direction. And they're poised to snap their playoff drought before anyone expected.

New York moved into fourth place in the Eastern Conference with Sunday's 109-90 rout of the Detroit Pistons. The Knicks have won three in a row and seven of nine to climb back over .500 at 18-17, the first time they've been above .500 on March 1 since the 2012-13 season — which is also the last year they made the playoffs.

Most thought the Knicks would struggle through another rebuilding season. But they are young and hungry and eager to start changing expectations.

"Honestly, in our locker room it's expected," said first-time All-Star Julius Randle. "I'm not really surprised where we're at as a team. We have a certain level of focus on a night to night basis that gives us a shot every night."

LATEST SCORES: Keeping up with the latest from the Association

Julius Randle on the Knicks wins:

“I’ve said it all year, we feel like every time we go out, we’re going to win.”@J30_RANDLEpic.twitter.com/HAISJpvdam

The Knicks are in position to get back to the postseason thanks in large part to a defense that has morphed into one of the best in the league.

Call it the Tom Thibodeau effect.

In his first year in New York, Thibodeau has seamlessly implemented his famed defense and has the Knicks second in the NBA in defensive rating, according to NBA.com, behind the Los Angeles Lakers and ahead of the Utah Jazz. The Knicks allow the fewest points per game, the lowest opponent field goal percentage and the lowest opponent 3-point percentage.

"We've got a young team. We have a team that can grow," Thibodeau said. "If we get everyone committed and willing to sacrifice to put the team first, good things can happen."

01/03/2021 Business Comments Off on 5 things to know in the NBA for Monday: How good can the New York Knicks really be?
Markets