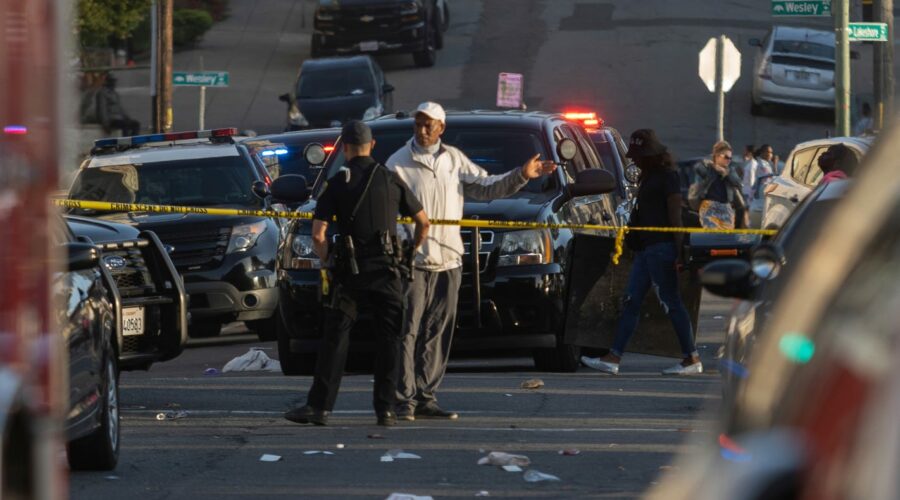 A 22-year-old man was killed and five others were wounded in a shooting Saturday in Oakland near the city’s Juneteenth celebration, though it wasn't known whether the violence was connected with the event, police said. (Photo: Dylan Bouscher, AP)

Three people were dead, five were recovering from gunshot wounds, and police were hunting for a killer Monday after gunfire erupted at a Father’s Day celebration in Richmond, California.

Richmond police Sgt. Aaron Pomeroy said multiple people apparently walked up to the house hosting the party at about 11 p.m. local time Sunday and fired into a crowd of people. First responders at the scene found two dead victims, and a third person at a local hospital a short time later, Pomeroy said.

Local media including the ABC station said a Guatemalan “Marimba” party – the marimba is the national musical instrument of Guatemala – was underway with about 100 people, music and dancing.

One of the survivors was hospitalized in critical condition, he said. Another was in fair condition and three of the wounded were treated for their injuries and released.

Pomeroy said no arrests had been made an no motive determined.

Manhunts in Savannah, Chicago, Austin after shooting rampages: ‘We do not want to be a police state’

The attack came one day after a shooting in Oakland, about 10 miles south of Richmond. A 22-year-old San Francisco man died and six others were wounded after police said a crowd of 5,000 had gathered at Lake Merritt.

The wounded included five males ranging from age 16-27 and one female 21-years-old, police said. All the wounded victims were reported to be in stable condition.

Police said officers observed two men with guns running from the scene and took them into custody. The homicide investigation unit will determine whether the individuals are responsible for this shooting, police said.