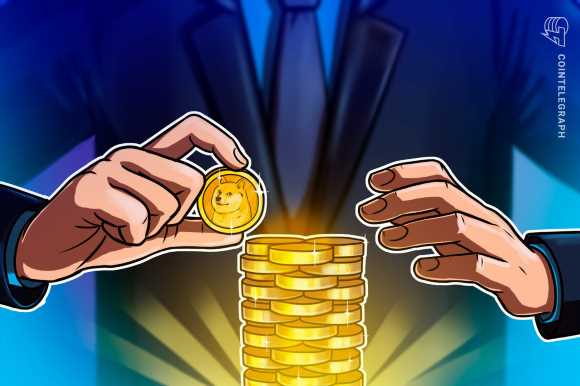 The cryptocurrency market has had a wild ride thus far in 2021 as multiple sub-sectors including decentralized finance (DeFi), nonfungible tokens (NFTs), memecoins and layer-two solutions have seen their total value locked and token prices skyrocket to new highs.

One of the biggest success stories of the year was Dogecoin (DOGE), a simple “joke” cryptocurrency that has morphed into a darling of the cryptocurrency sector. Interestingly, over the past month, the project is again gaining momentum, and several data points suggest sentiment for the DOGE is becoming increasingly bullish.

Three reasons analysts and traders are developing a more bullish outlook for DOGE include increases in on-chain activity, rising trading volumes on top exchanges and an increase in attention from big-name influencers.

The ability to attract new tokenholders is one of the most important factors for the long-term viability of a cryptocurrency project because new users help to increase token velocity and overall demand.

As seen in the following tweet from Philip Gradwell, chief economist at Chainalysis, Dogecoin adoption is currently at its highest level since the 2017 bull market, with new users who have held the token for less than six months currently holding 25% of the circulating supply.

A follow-up tweet from Gradwell provided deeper insight into the on-chain activity for Dogecoin, which had an average of 32,000 daily active users (DAUs) in 2021. 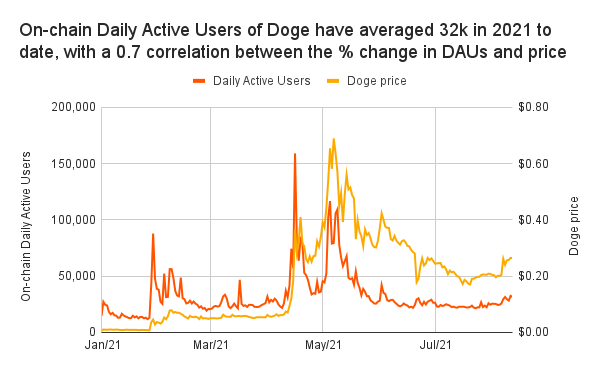 Exchange volumes are on the rise

A second reason for the increase in attention from analysts toward DOGE is the rising trading volumes on some of the biggest exchanges, including Coinbase.

As seen in the following tweet from Pentoshi, a pseudonymous Twitter analyst, DOGE’s 24-hour trading volume on Coinbase averaged $200 million per day over the prior week.

Coinbase is the largest fiat on-ramp in the United States, and this spike in activity from traders could be a sign that retail investors are piling back into DOGE and possibly other sub-$1 tokens.

A third reason for the bullish sentiment surrounding Dogecoin is recent commentary from big-name influencers such as Mark Cuban, who is once again touting the benefits of the Dogecoin as a payment rail to his legion of Twitter followers.

Cuban’s focus on Dogecoin drew the ire of some Bitcoin (BTC) fans who implored the Shark Tank star to just “Buy a stack of Bitcoin and stop the doge shill,” a sentiment to which Cuban directly replied and pointed out that the decision was largely in response to user demand.

“I don’t shill Doge. I shill the prods & services of my companies. Where we allow people to pay in ANY crypto, 95% of the sales are in DOGE. Customers CHOOSE to use DOGE. We can argue everything and anything re BTC, but right now DOGE is the people’s way to pay.”

The positive shift in momentum for Dogecoin was also registered in the VORTECS™ data from Cointelegraph Markets Pro, which began to detect a bullish outlook on Aug. 9, prior to the recent price rise.

The VORTECS™ Score, exclusive to Cointelegraph, is an algorithmic comparison of historic and current market conditions derived from a combination of data points including market sentiment, trading volume, recent price movements and Twitter activity. 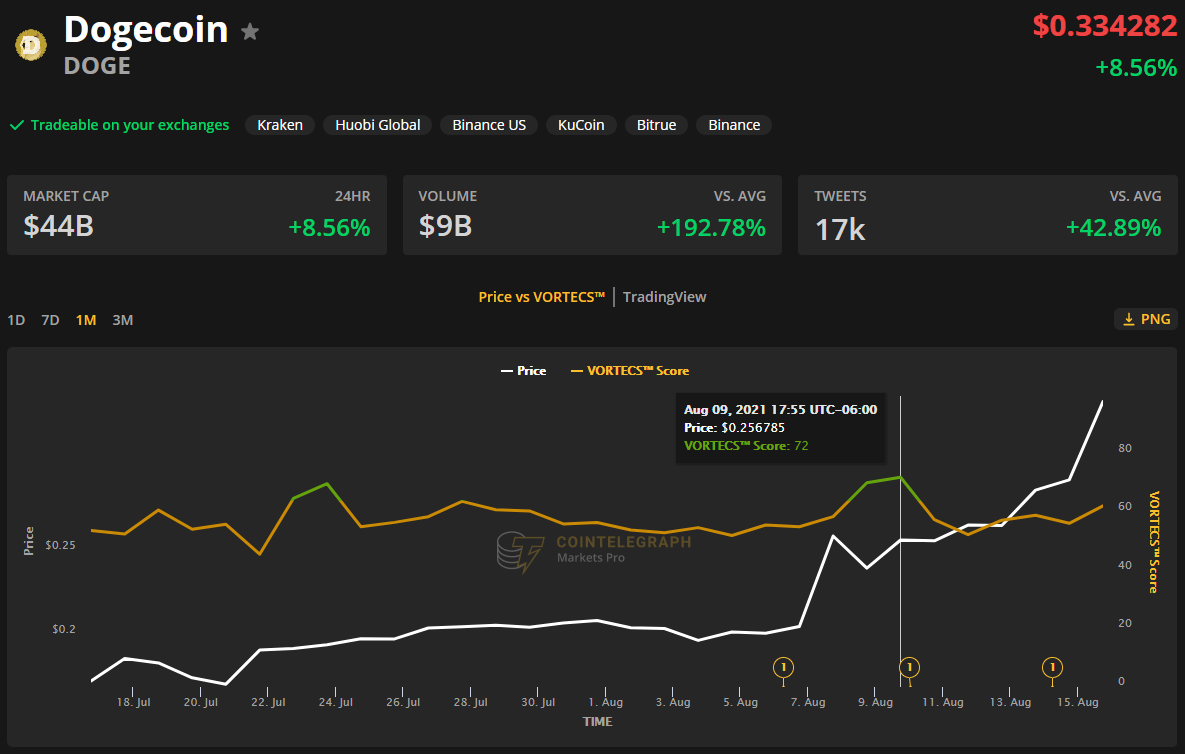 As seen in the chart above, the VORTECS™ Score for DOGE climbed into the green on Aug. 7 and reached a high of 72 on Aug. 9, around 24 hours before its price increased 44% over the next six days.

Rising on-chain activity and 24-hour exchange volumes, along with the return of DOGE promotion by popular influencers, has Dogecoin primed to possibly see its second bull market rally in 2021.