Investing in cryptocurrencies is risky. Investing in initial coin offerings (ICOs) even more so. That’s the finding of a recent survey by bitcoin.com, the website owned by so-called “Bitcoin Jesus” Roger Ver.

The survey tracked the progress of 902 ICOs listed on Tokendata and its findings confirm the hit-and-miss (actually, mostly miss) nature of such speculative investments, with 46% of them failing, either in falling far short of their fundraising target (142) or folding after the ICO ended (276).

As a group, the failed projects raised $233 million, amounting to just 3.9% of the $5.6 billion raised in crowdsales last year, but nevertheless not an inconsiderable sum.

EWN took a look at the Tokendata stats and found that among the failed projects there were eight which raised no money whatsoever, not even a cent. They were: Virtual Cashback, Lookrev, TOP, burstIQ, Autonio, DLSAcademy, Doft and DisLedger, in sectors ranging from exchanges to virtual reality to healthcare.

The failures are a good sign in one way though, as it suggests investors are being more discriminating about where they invest and are no longer throwing money at projects on the basis of little more than a good idea, a pretty website or a whitepaper with lots of apparently impressive formulae and algos.

Many of the projects launched last year that are still up and running may also likely fail at a later date, so that 46% figure will probably, over time, prove to be a low estimate.

A report last year by Architect Partners found a failure rate of 59%, based on data sourced  from Tokendata.io and Smith + Crown. 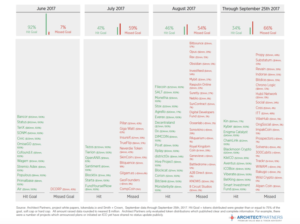 Increasingly, then, those looking to make investments in blockchain projects are likely only considering those projects that have at minimum a prototype or better still an alpha and a team whose members have proven experience in business execution, already have some venture capital or angel backing, have had their smart contracts audited and have existing developer activity on their platform or a beta with active users.

The fundamentals of the token and its utility in its ecosystem are also key but unless the proof of product execution capability and platform activity is discernible, then investors need to have some other very good reason to send ether down the pipe.

However, despite the crashing and burning of many projects, with many more to join them in the graveyard, the sector is still booming albeit more concentrated in focus.

The ongoing tokensale for the EOS decentralised applications platform, which has raised $1.3 billion and finishes on 26 June, marking one year on sale, and the private sale(s) being conducted by the Telegram messaging app that has reportedly raised $1.15 billion and may be targeting $2 billion even before the public sale begins, both show that the appetite for what might be termed quality ICOs has not waned.

The EOS sale is different from most in that the token is already on leading exchanges and therefore can be bought either direct from the project or in the open market.

The Telegram sale has come in for some criticism because of the lack of transparency surrounding the fact that it closed it first private sale after pulling in $850 million, which included participation from top-notch venture firms such as Sequoia Capital and Benchmark, but then opened a second private sale shortly thereafter, the details of which have not been divulged.

This highlights a further worry for small investors trying to get in on what could be valuable projects – big investors in private sales secure the largest discounts, which means unless there are rules on divesting, there is nothing to stop the early investors dumping a portion of their tokens as soon as they hit exchanges, at the expense of the small retail investor.

Telegram’s success in raising funds will likely encourage other companies with establish products to consider the ICO route.

ICOs are an attractive form or fundraising not just because of the amounts projects have amassed but also the ease in which they have done so.

With the exception of China and South Korea where ICOs are now banned and the clampdown by the Securities and Exchange Commission in the US, which has ruled that most ICOs – or token generation events as some projects now describe ICOs – are in fact selling securities and as such must abide by the relevant laws and regulations, a project can solicit for funds from investors across the world without having to abide by any of the rules that would pertain to a company seeking funding through the public capital markets.