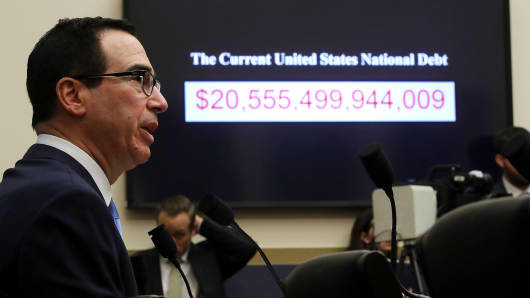 Goldman Sachs sees a tidal wave of red ink — and it may drag the U.S. economy into its undertow.

Federal deficit spending is headed toward “uncharted territory,” the firm said on Sunday, suggesting that the Trump administration and Congressional Republicans may not be able to count on the economic boost of tax reform for very longer.

In the wake of an ambitious infrastructure plan and a budget that drew fire from virtually all sides, Goldman Sachs said in a note to clients that the federal deficit would reach 5.2 percent of U.S. growth by 2019, and would “continue climbing gradually from there.”

The GOP is counting heavily on the fiscal stimulus provided by tax reform—many companies have announced investment plans and doled out bonuses, even as the majority of taxpayers enjoy lower rates—to insulate them from a restive public in November. Polls suggest that Republicans may lose control of Congress, and President Donald Trump’s own poll numbers hover below 50 percent in most polls.

Yet Goldman Sachs warned that the economic impetus from tax reform may have diminishing returns after this year. “The fiscal expansion should boost growth by around 0.7pp in 2018 and 0.6pp in 2019, but will likely come to an end after that”—listing a litany of reasons why spending and debt would conspire to undermine the world’s largest economy.

The dire fiscal backdrop comes against Trump’s spending plans, which have created plenty of critics on the right and left. In a weekly podcast, Caleb Brown, a scholar at the libertarian Cato Institute, branded the Trump administration spending and infrastructure spending “budget buster[s]” saying that overall spending was “very likely” to rise in the coming years despite isolated cuts.

The Congressional Budget Office estimates the level of U.S. debt to gross domestic product (GDP) is currently around 77 percent. If current imbalances hold, Goldman Sachs expects the ratio to hit 85 percent of GDP by 2021. Last year, the CBO issued a dire forecast that the U.S. debt/GDP could skyrocket to 150 percent by 2047, if the trend was left unchecked.

Goldman’s analysts wrote that the “growth effect comes from the change in the deficit, not the level, and further expansion would put the U.S. onto an even less sustainable long-term trend. Second, some of the recent deficit expansion relates to changes unlikely to be repeated, such as the temporarily large effect of certain tax provisions.”

Lastly, “there is a good chance that control of Congress will change after this year’s midterm election, likely making it more difficult to further expand the deficit,” Goldman added.

Recently, the Treasury projected a virtual sea of red government ink, saying it would have to borrow close to $1 trillion this year, and above that level in the years to come. Goldman underscored that fact by saying the Treasury is borrowing at record low rates, but couldn’t expect to do so indefinitely.

The Treasury’s need for more debt is inauspicious, given the recent surge in U.S. yields and a Federal Reserve that’s expected to begin a campaign to hike borrowing costs and withdraw liquidity.

“We expect rising interest rates and a rising debt level to lead to a meaningful increase in interest expense,” Goldman said. “On our current projections, federal interest expense will rise to 2.3 percent of GDP by 2021,” and could hit 3.5 percent by 2027.