Bitcoin has now held above the critical level of $8,000 for more than 40 hours, a clear testament that this recent rally could actually be sustainable and by now all eyes are on $10,000.

What’s most notable is that the break above $8,000 happened on extreme volume. Tuesday’s trading action was high across the board. Online exchanges, Wall Street’s futures contracts, and even on the blockchain itself trading action achieved levels not seen in months.

In traditional markets, when a breakout happens on strong volume it’s considered a more powerful move, which leads me to believe that we might actually be witnessing a trend reversal.

Of course, trading is always risky and cryptoassets are the riskiest market that I’ve ever known. So it always pays to keep a diversified portfolio.

Please note: All data, figures & graphs are valid as of July 26th. All trading carries risk. Only risk capital you can afford to lose. 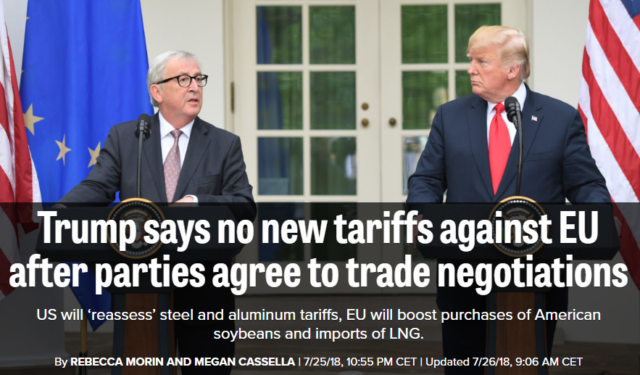 Of course, investment house war rooms are still busy strategizing on exactly how they will react to any further potential developments. This might not be over just yet…. but it might be. So some stocks did receive a boost this morning, especially in Germany where carmakers that export to the US breathed a YUGE sigh of relief.

Today we’ll have a notable interest rate decision from the ECB at 14:30 Frankfurt time. No change is expected but we always need to be alert in case of any surprises.

Facebook’s quarterly earnings report that came out last night turned out to be extremely disappointing, to say the least. 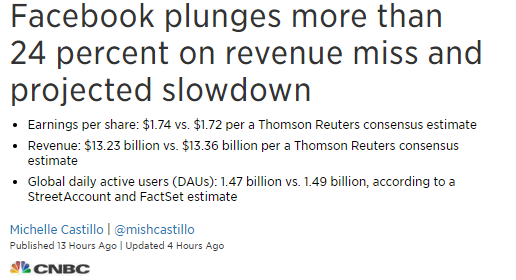 Hopes were high going into this report and FB stock closed out the trading session at all-time record highs. Shares are expected to open up way down when the bell rings on Wall Street as the world’s largest social network loses approximately $130 billion of its value.

Amazon will report their earnings after the bell today so watch out for that one.

Why is Bitcoin Flying?

With all the bullish sentiment on Bitcoin at the moment, I would like to pour a little cold water on the fire.

To do that, we kind of need to pick apart some of the top reasons that are bouncing around the media…

Blackrock: This is the least serious IMHO. Blackrock’s confirmation was that they’ve been looking into it for a while but that nothing is material imminent. Furthermore, BLK‘s CEO Larry Fink completely played down investor interest in this.

Facebook & Google Ads: Facebook has reversed their blanket ban on crypto advertisements and is now whitelisting credible crypto players. They’re not in any rush but it’s clear that this channel is likely to open further in the coming weeks. Google is being a bit less clear about their policy but there are rumors floating that they’re about to follow suit.

Bitcoin ETF: This is a rather popular opinion about why the market is rising. The SEC is expected to make a decision to approve or disapprove a new bitcoin backed ETF that is sponsored by the CBOE. The ETF market is huge, so this could potentially open the market to a world of new well-funded buyers. However, the timeline here might be a bit distorted. Here’s an excellent thread that explains we’ll probably be looking at a final deadline of early March 2019.

Japan SBI: A new virtual currency desk by the financial giant SBI Group opened for business on June 4th. This could definitely be leading to fresh inflows to the market, but I haven’t managed to find any volume stats for them just yet.

BoJ Hedge: This is a theory of my own that I tweeted about yesterday. The following graph shows the yield of Japanese bonds (blue) spiking up on Sunday due to speculation that the Bank of Japan is about to take action.

My original theory was that Japanese traders who are fearful of the government’s intention to weaken the Yen have bought bitcoin as a hedge.

However, several acute followers have pointed out that the moves expected by Japan could serve to strengthen the Yen. While it’s true that the BoJ might be about to raise their interest rates, which would probably strengthen the Yen, historically Japan likes to maintain low rates and the official policy of Prime Minister Abe and the BoJ is to keep the Yen weak.

Reflecting further… this could simply be a matter of money flow. Bond yields trade inverse to price. Meaning, that the yield spike we see on the chart above actually means that bonds sold off. It’s entirely possible that some of the money that came out off of the bond markets actually found its way to bitcoin.

In any case, nobody can say with 100% certainty why the rally is happening. It could be any of the above or none of them, or a combination. Lord knows there were also plenty of positive updates throughout the year that didn’t end up affecting prices.

The market is made up of people and their perceptions. What has become clear over the last six months is that many people see the area between $5,500 and $7,500 as cheap and there are plenty of willing buyers at those levels.

Let’s have an awesome day ahead!

This content is provided for information and educational purposes only and should not be considered to be investment advice or recommendation.
The outlook presented is a personal opinion of the analyst and does not represent an official position of eToro.
Past performance is not an indication of future results. All trading involves risk; only risk capital you are prepared to lose.
Cryptocurrencies can widely fluctuate in prices and are not appropriate for all investors. Trading cryptocurrencies is not supervised by any EU regulatory framework.

Connect with me on…