Bitcoin price has made another big move a couple of hours ago as it pulls out of short term consolidation and tapped a two month high. The move came after another mass liquidation of shorts on BitMEX to the tune of almost $40 million.

After a three day period of consolidation around the $8,100 bitcoin started to move again. Within a couple of hours, BTC had broken through resistance at $8,400 and carried on higher to tap a two month high just below $8,600 according to Tradingview.com. 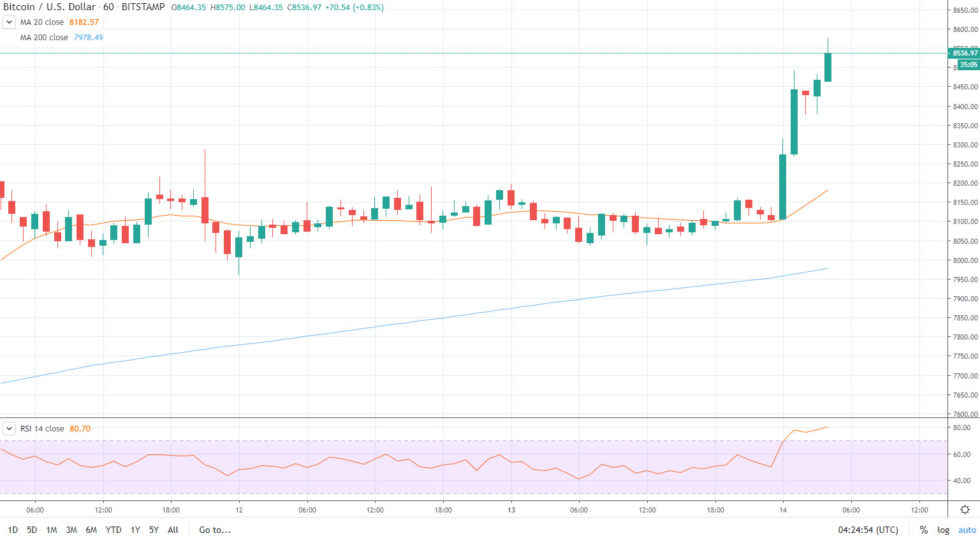 Bitcoin has now hit its highest price for the year and has recorded a gain of 20% since New Year’s Day. Technical signals are now turning bullish, one of them is the daily Ichimoku Cloud as noted by crypto traders.

The resistance currently lies around $8,600 where bitcoin appears to have halted for now. The next level of longer-term resistance is above $9k which is where things could be heading next.

A total of $38 million in shorts have been liquidated on BitMEX over the past six hours resulting in the price pump according to Datamish charts.

The move was enough to trigger a wave of buy signals pushing the asset up to an eight-week peak. Trader ‘Crypto Hamster’ was there to observe the first wave of liquidations and predicted a pullback.

“The growth will unlikely be sustainable. A pull-back is likely to happen soon (maybe, like “now”). Check the shorts <50% on both Bitmex and Binance and the Funding Rate above the zero level.”

The second wave of liquidations then followed dwarfing the first one and sending the benchmark crypto even higher, much to the delight of the industry bulls. BTC’s first major buy signal since March 2019 flashed up a couple of days ago adding to the sentiment.

The move has added a further $10 billion to total crypto market capitalization which has reached a two month high of $226 billion. So far this year over $35 billion of fresh capital has flooded back into digital assets.

Bitcoin is clearly leading things as usual but Ethereum has made it back to a key psychological level at $150 as it gets pulled higher.

The two notable movers alongside BTC today are its hard forks BCH and BSV surging 7% and 25% respectively. The big pump by the latter has enabled it to flip Litecoin and take sixth place with a market cap of $3.6 billion.

Will bitcoin price break above $9,000 this week? Add your comments below.

January 14, 2020 Business And Finance Comments Off on Did Bitcoin Price Rally to $8600 Because of BitMEX Liquidations?
World News