Bitcoin (BTC) starts a new week with some fresh hope for hodlers after halting what has been the longest weekly downtrend in its history.

After battling for support throughout the weekend, BTC/USD ultimately found its footing to close out the week at $29,900 — $450 higher than last Sunday.

The bullish momentum did not stop there, with the pair climbing through the night into June 6 to reach multi-day highs.

The price action provides some long-awaited relief to bulls, but Bitcoin is far from out of the woods at the start of what promises to be an interesting trading week.

The culmination will likely be United States inflation data, this itself a yardstick for the macroeconomic forces at world globally. As time goes on, the impact of anti-COVID policies, geopolitical tensions and supply shortages is becoming all the more apparent.

Risk assets remain an unlikely bet for many, as central bank monetary tightening is seen to be apt to pressure stocks and crypto alike going forward.

Bitcoin’s network fundamentals, meanwhile, continue to adapt to the surrounding reality and its impact on network participants.

Cointelegraph takes a look at five factors to bear in mind when charting where BTC price action may be headed in the coming days.

It was a long time coming, but Bitcoin has finally closed out a “green” week on the weekly chart.

BTC/USD had spent a record nine weeks making progressively lower weekly closes — a trend which began in late March and ended up being the longest ever in its history.

On June 5, however, bears had no chance, pushing the pair to $29,900 before the new week began, this still being approximately $450 higher than the previous week’s closing price.

That event sparked several hours of upside, with local highs totaling $31,327 on Bitstamp at the time of writing — Bitcoin’s best performance since June 1.

While some celebrated Bitcoin’s newfound strength, others remained firmly cool on the prospects of a more substantial rally.

Cointelegraph contributor Michaël van de Poppe eyed the open CME futures gap from the weekend, this providing a lure for a return to $29,000.

“Still expecting this to be happening on Bitcoin,” he told Twitter followers.

“A drop towards the CME Gap at $29K would make a lot of sense before a short reversal towards $31.5K.”

A look at order book data reinforces the friction bulls are likely to face in the event of a continued breakout. At the time of writing, the area around $32,000 had more than $60 million in sell-side liquidity lined up on Binance alone. 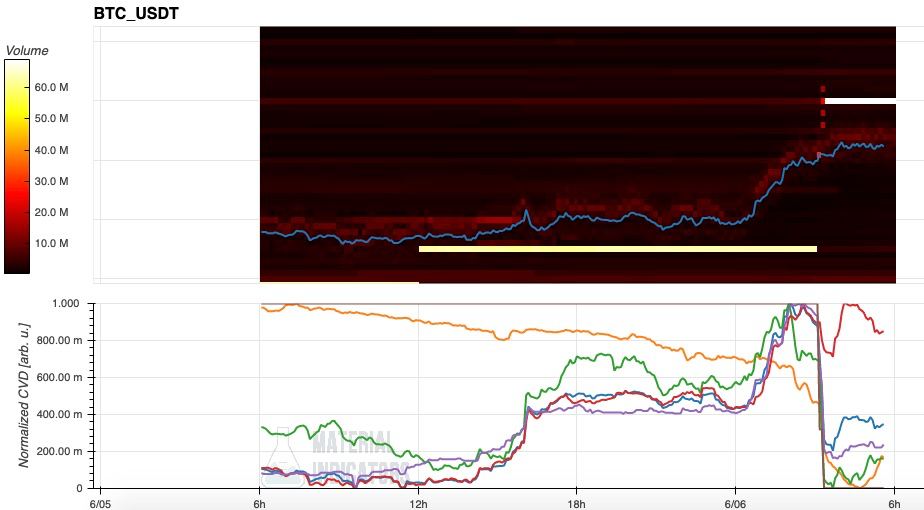 For Il Capo of Crypto, a Twitter analytics account well known for its sobering takes on upcoming BTC price action, there was likewise little to feel confident about.

Nonetheless, the market was not without its optimism.

“I think we drop then go up, so I’ll be longing if this happens. If stocks open up green we could rally and I’ll pivot to alts to ride them up. TP level is at $34,000 for now.”

U.S. inflation is at its highest since the early 1980s, but will it continue?

The market will find out this week as June 10 sees the release of Consumer Price Index (CPI) data for May.

One of the benchmarks for gauging how inflation is progressing, CPI prints have traditionally been accompanied by market volatility both within crypto and beyond.

The question for many is how much higher it can go as the aftermath of the Russia-Ukraine conflict and its impact on global trade and supply chains continues to play out.

In the U.S., the Federal Reserve’s interest rate hikes are also under scrutiny as a result of prices surging.

The end of the “easy money” era is a difficult one for stocks and correlated crypto assets more generally, and that pain trend is expected not to end any time soon, regardless of inflation performance.

“Liquidity is going out of the market and what that means is it will have an impact on the equity markets,” Charu Chanana, market strategist at Saxo Capital Markets, told Bloomberg.

“We do expect that the drawdown in the equity markets still has some room to go.”

Chanana was speaking as Asian markets rallied in early week’s trading, led by China loosening its latest round of COVID-19 lockdown measures.

The Shanghai Composite Index was up 1.1% at the time of writing, while Hong Kong’s Hang Seng traded up more than 1.5%.

Beyond the intraday data, however, the mood when it comes to macro versus crypto is very much one of cold feet.

For trading firm QCP Capital, the latest contraction in U.S. M2 money supply — only its third in around twenty years — is another reason to not take any chances.

“This contraction in M2 has been a result of Fed hikes and forward guidance which drove a surge in reverse repos (RRP) to all-time record levels. Banks and money market funds withdrew money from the financial system in order to park it with the Fed to take advantage of high overnight interest rates,” it wrote in the latest edition of its Crypto Circular research series.

“This draining of liquidity will only be exacerbated by the upcoming QT balance sheet unwind as well, beginning 1 June. We expect these factors to weigh on crypto prices.”

Despite weeks of lower prices endangering their cost basis, Bitcoin miners have so far held off from significant distribution of coins.

Hash ribbons measures miner profitability and has been historically accurate in correlating with price phases. Currently, the “capitulation” phase similar to March 2020 is underway, he explained, but hodlers should do anything but sell as a result.

“Reminder: this is not a sell signal. The end of a capitulation period has historically set up some of the best long-term buys for Bitcoin.” 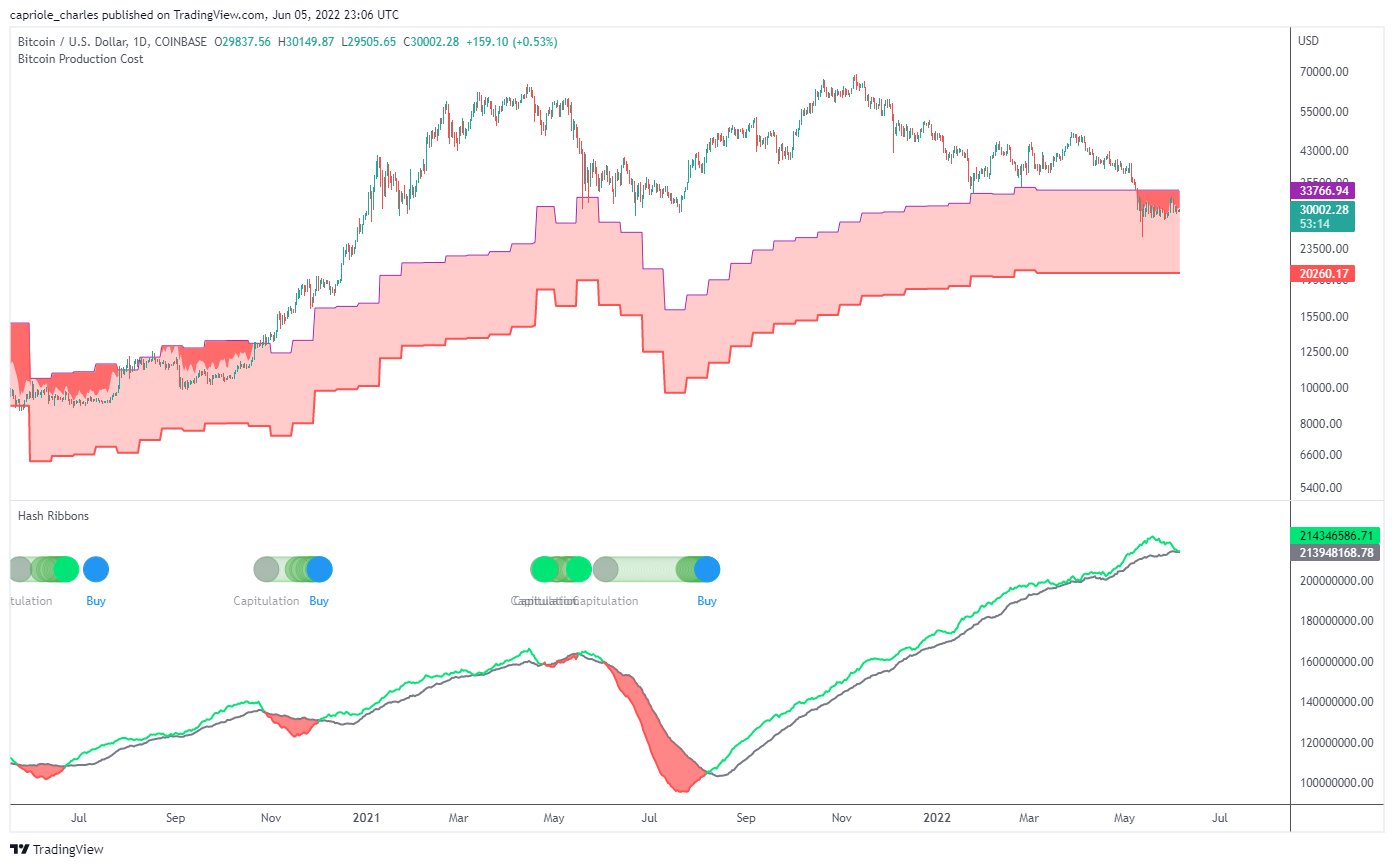 Previously, Cointelegraph reported on miners’ ongoing challenges, which now includes a ban the practice by the State of New York this month.

Fluctuations in miner participation will have a palpable effect on Bitcoin’s hash rate and network difficulty.

So far, hash rate has remained stable above 200 exahashes per second (EH/s), according to estimates, indicating that miners for the most part remain active and have not decreased activity over cost concerns.

At its upcoming automated readjustment this week, difficulty will decrease by less than 1%, again reflecting a relative lack of upheaval in the mining sphere.

By contrast, the previous readjustment two weeks ago saw a 4.3% reduction, marking the biggest reversal since July 2021. 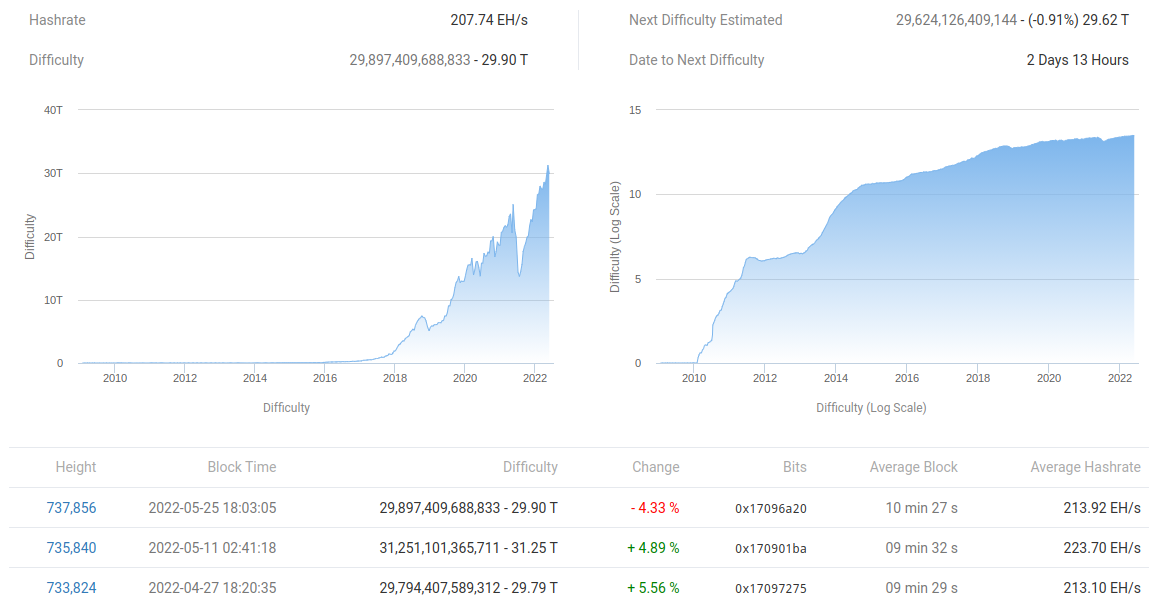 Beyond the short term, a sense of optimism prevails among some of Bitcoin’s best-known commentators.

“As we see in the growth of its hash rate, today bitcoin is roughly 50% cheaper yet 20% stronger than a year ago,” podcast host Robert Breedlove noted in part of a Twitter debate on June 5, arguing that this showed “mobilization” of entrepreneurs interested in fueling Bitcoin’s growth.

In terms of putting their money where their mouth is, Bitcoin’s biggest investors could be showing the way this month.

As noted by sentiment monitoring firm Santiment, entities controlling 1,000 BTC or more now own more of the BTC supply than at any point in the past year.

“The mega whale addresses of Bitcoin, comprised partially of exchange addresses, own their highest supply of $BTC in a year,” Santiment summarized on June 6.

“We often analyze the 100 to 10k $BTC addresses for alpha, but accumulation from this high tier can still be a promising sign.” 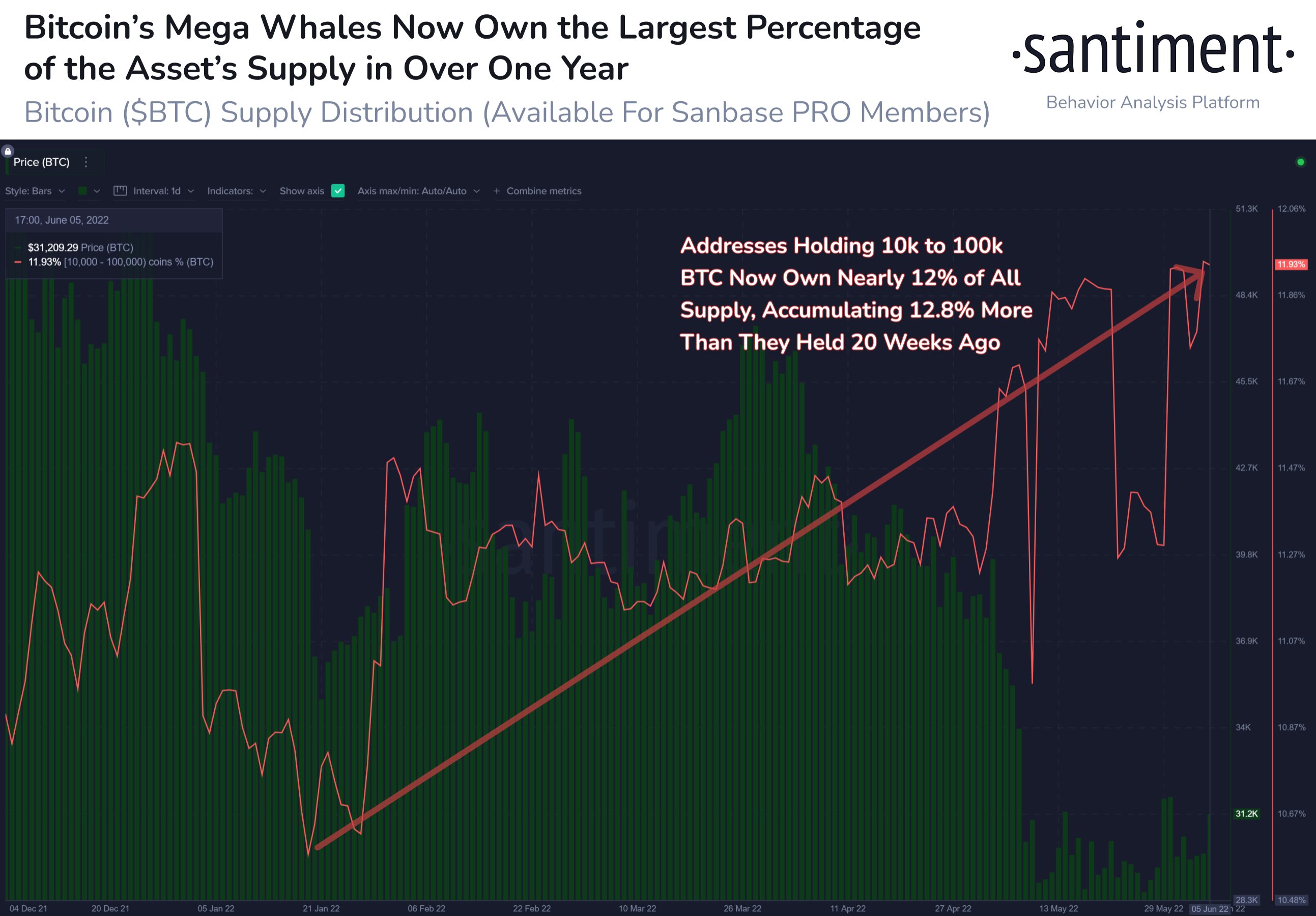 Data from on-chain analytics firm CryptoQuant meanwhile allays fears that users are sending BTC en masse to exchanges for sale. The overall trend in decreasing exchange reserves continues, and is at levels last seen in October 2018. 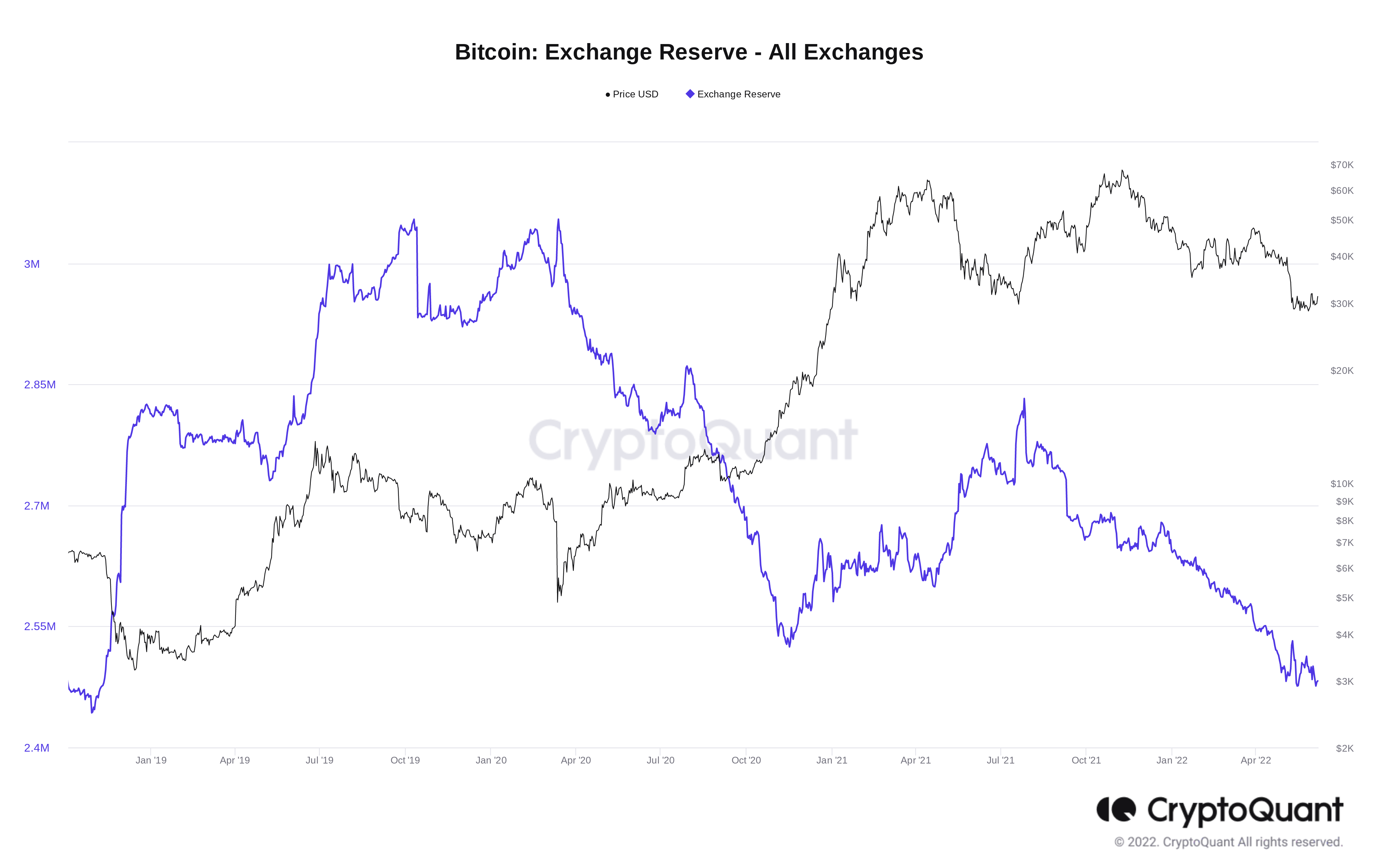