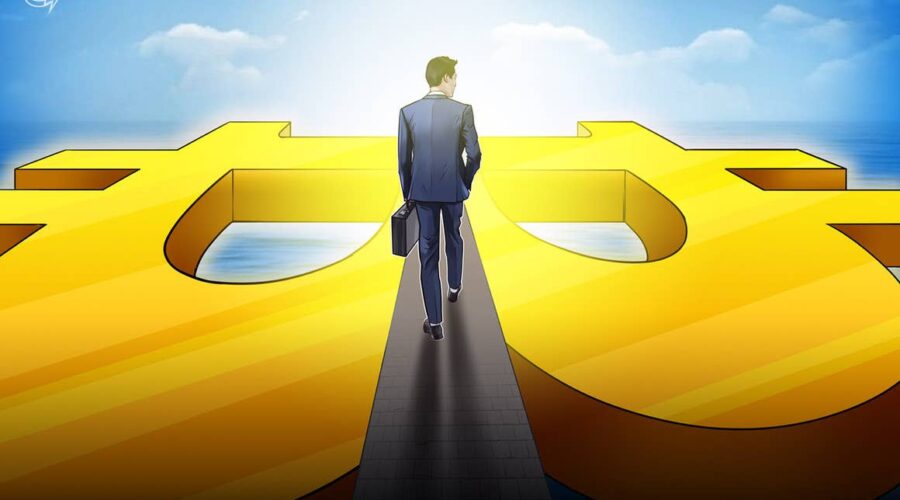 Bitcoin (BTC) starts a new week in a new price range above $51,000 — has it beaten crucial resistance?

After the weekend turned from sideways to surge for BTC price action, bulls are now targeting $54,000 and higher.

Given how difficult it has been to hold $50,000 for any length of time over the past month — let alone beat out the sellers at $51,000 and higher — anything could happen in the coming hours and days.

With everything to play for, Cointelegraph takes a look at five factors worth considering when deciding on where Bitcoin may go next.

It’s been variously referred to as “crucial” and the “final hurdle” by analysts — now, Bitcoin has passed $51,000.

The move was a long time coming — multiple attempts to crack $50,000, a psychological barrier in itself, all ultimately failed to flip it to support. The volume of sellers above the range proved simply too much for bulls, who previously suffered a lack of momentum to sustain higher levels.

The night from Sunday to Monday changed the paradigm, however, and BTC/USD finally passed $51,000 for the first time since mid May. The question now is “can it hold?”

For some, the answer is obvious.

In the event, BTC/USD hit highs of just under $52,000 before cooling and consolidating near that peak. 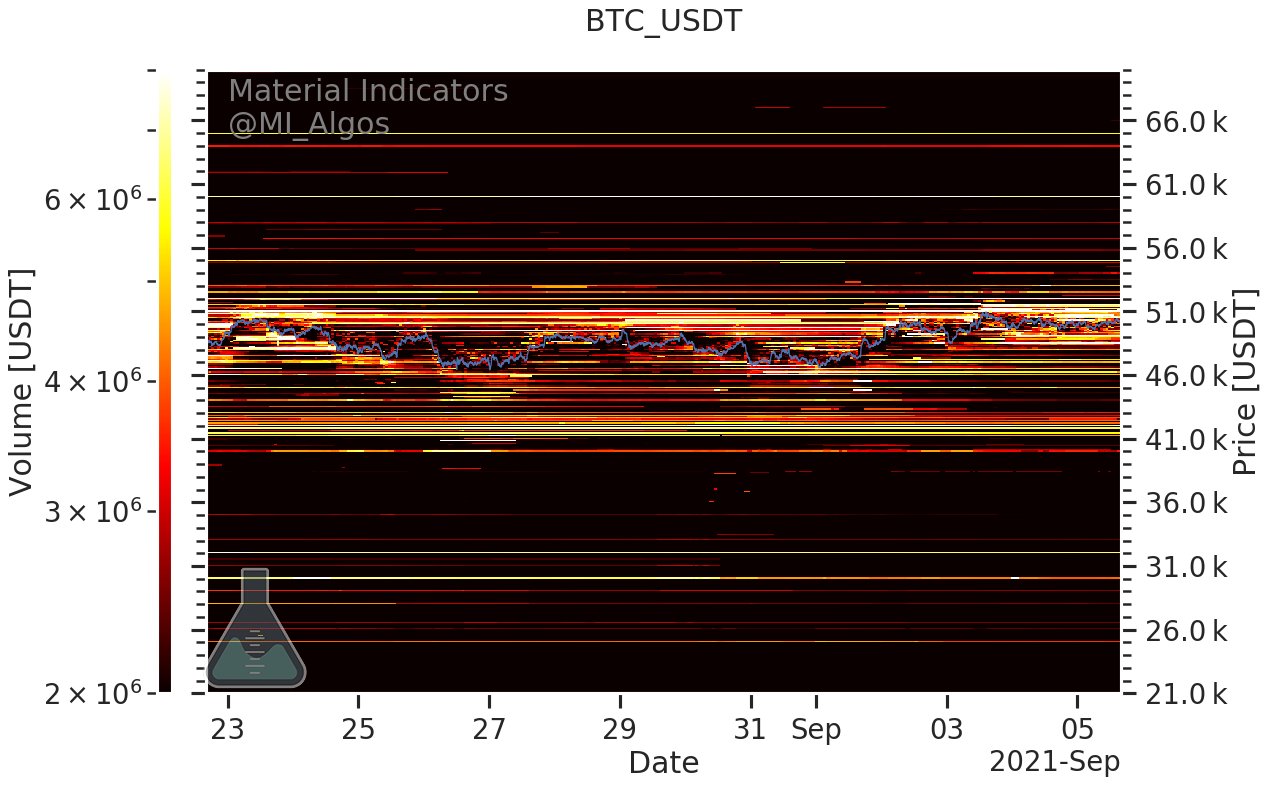 This places the pair at the very top of the resistance wall, with only $52,000 remaining as a meaningful hurdle before much easier conditions for bulls return.

“Price is also above the PoC. Buyers in control.”

Pentoshi previously argued that $50,000 in fact had little sway as a technical landmark. $48,700, he said on Saturday, was important to hold as a daily close in order to secure further upside. 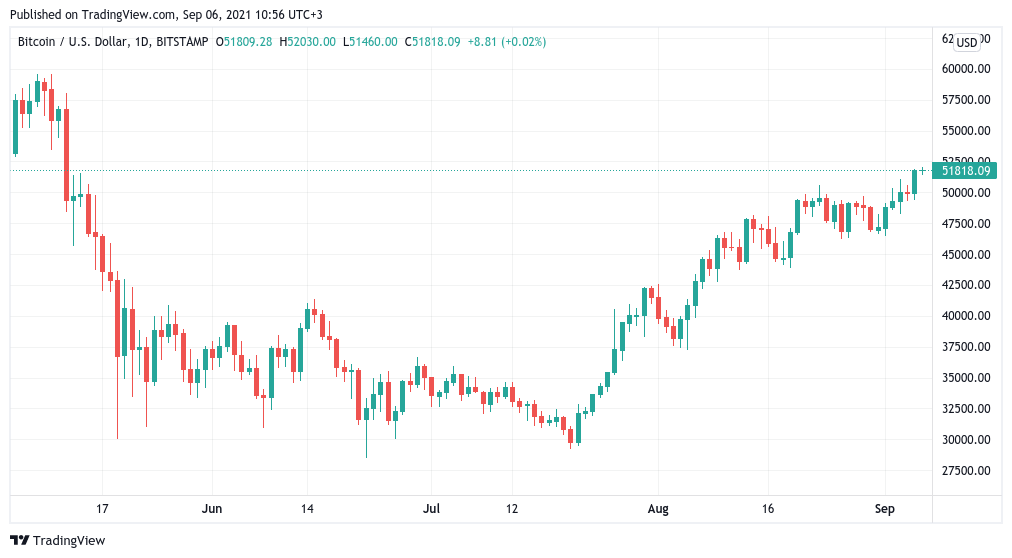 A less technical but equally symbolic move is due for Bitcoin this week — it will become legal tender of a sovereign state for the first time in history.

On Sep. 7, El Salvador will officially begin using Bitcoin as its national currency alongside the U.S. dollar.

Despite heavy warnings and even demands to abort the move from the likes of the International Monetary Fund (IMF) and others, the country’s president, Nayib Bukele, has held firm. Now, Bitcoin and its adoption will begin a major new experiment.

“As El Salvador takes a massive technological jump into the financial future, before any other country, there are bound to be mishaps,” Alex Gladstein, chief strategy officer at the Human Rights Foundation, said in a series of tweets about the topic.

Gladstein cited political moves by Bukele’s government among other problems which make Bitcoin adoption an interesting chapter in the country’s history. On a personal basis, however, the benefits for any El Salvadorean remain obvious.

“For Salvadorans who are open-minded and willing to put in work to understand Bitcoin it could yield enormous fruits,” he added.

Meanwhile, a movement currently gathering steam on social media involves Brazil, where the Bitcoin community plans to each buy $30 of BTC in support of the law.

Bitcoin price action continues to be supported by fundamentals which refuse to give up the pace of gains.

In just under two days’ time, the next automated readjustment will add an estimated 2.5% to Bitcoin’s difficulty, marking a fourth consecutive increase.

As Cointelegraph reported last week, this will be the first such occurrence since February, the period in which Bitcoin cracked $50,000 for the first time.

An essential indicator of miner activity and arguably Bitcoin’s most important feature, difficulty adjustments show no sign of let-up in an astonishing return to form which set in following the Chinese miner rout in May. 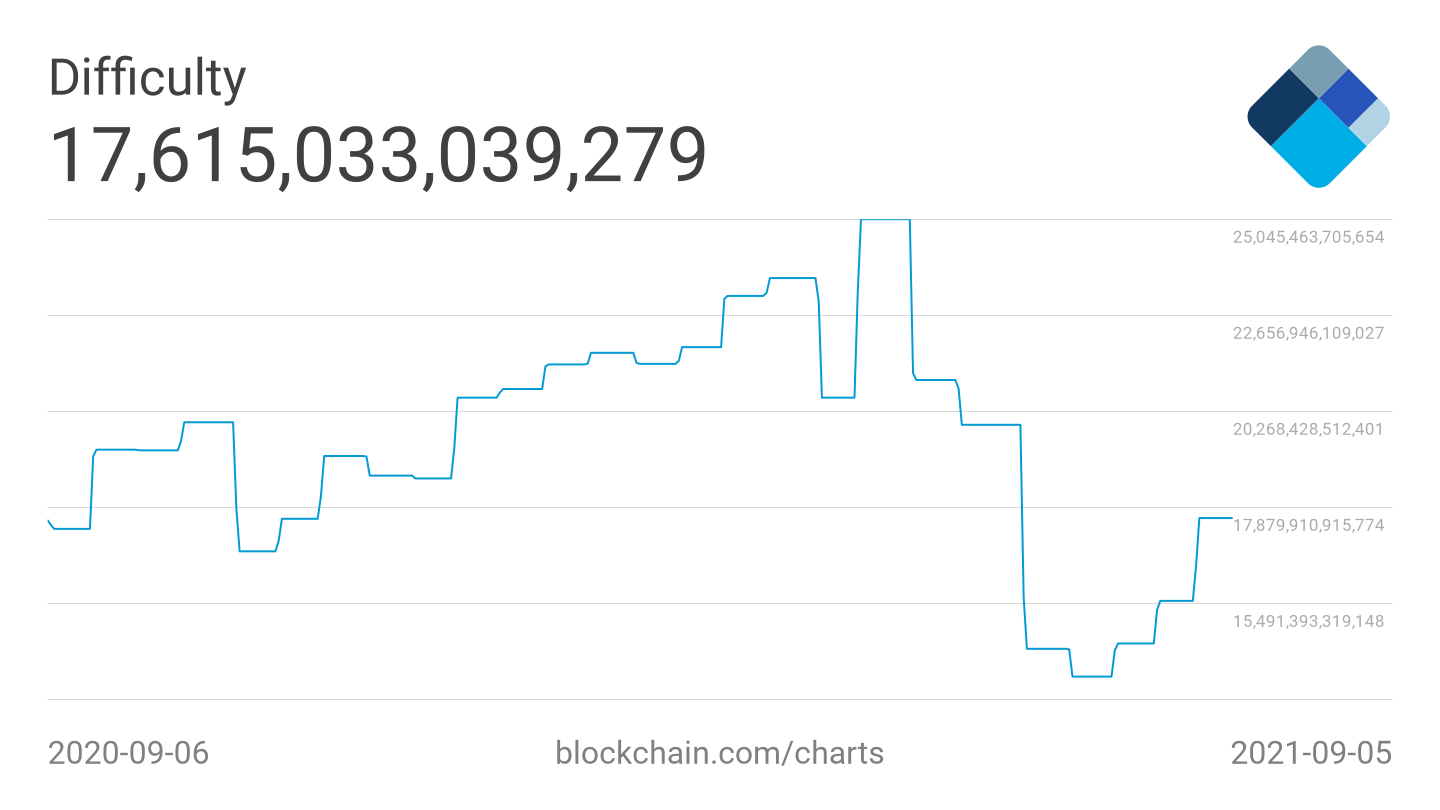 Alongside, the hash rate also continues to rebound, passing 130 exahashes per second (EH/s) this weekend and now just 37 EH/s below its all-time highs.

Fresh entry of hardware from relocating and newly active miners has given the hash rate a major boost — at its lows, the metric was at around half of its 2021 peak.

A new month calls for a new update of one of Bitcoin’s most accurate price prediction models — the stock-to-flow (S2F) family.

With September due for a minimum close of $43,000, the analyst confirmed that a $100,000 average price later this year was still easily feasible.

“On-chain (non-S2F) indicator shows no sign of a top yet (no red dots). This is in line with S2F forecast.”

With that, Bitcoin has entered the “orange” phase of the model last seen in an upward price surge in the second half of 2017. BTC price action, PlanB stated, is thus acting “like clockwork.” 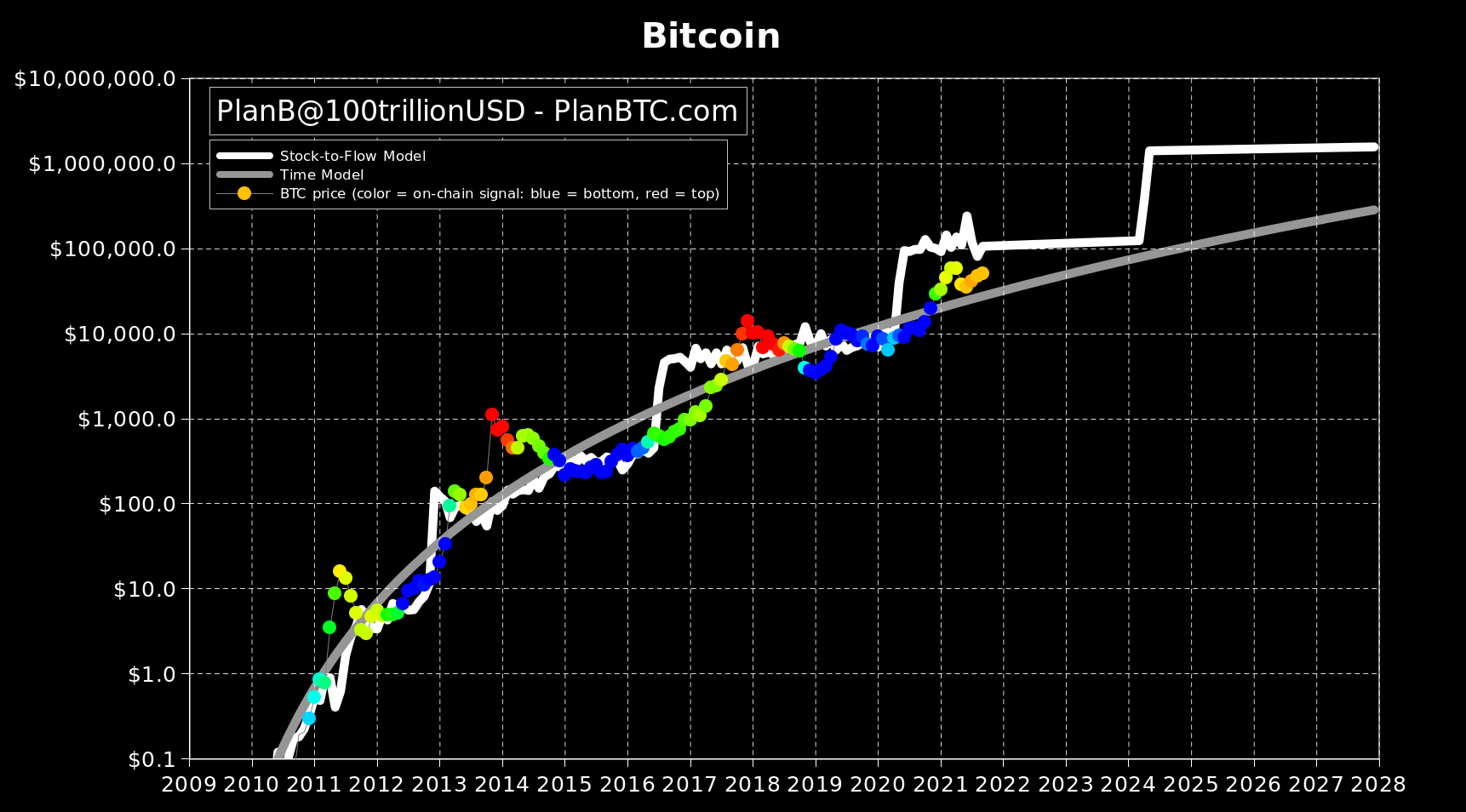 Extreme greed is back

Those concerned about a Bitcoin price rally biting off more than it can chew may yet be proven right.

According to sentiment gauge the Crypto Fear & Greed Index, traders are already back in the “extreme greed” mindset.

With a score of 79/100, Fear & Greed is thus just 16 points away from its historical top zone, an area that has sparked corrective moves in the past.

In order to avoid hitting it too soon, BTC price gains need to be slow and steady, and an impulse move could therefore still prove to be unsustainable.

The Index nonetheless saw 79 in August as well, and has remained between 70 and 80 for the past four weeks.

Funding rates contribute to the sense of expectation with rates much lower than when BTC first breached $50,000 early this year with considerably less euphoria than in April.

In other words, traders are much more cautious this time around, if not leaning bearish as price tries to reclaim the $50K level. However, this may actually boost the chances of a short-squeeze and more upside for the price of Bitcoin in the coming days.

06/09/2021 Business And Finance Comments Off on BTC becomes legal tender in El Salvador: 5 things to watch in Bitcoin this week
Markets