Bitcoin SV (BSV) is dumping hard which indicates it may have been a false rally in the first place.

Total crypto market capitalization has declined a couple of percent overnight as altcoins correct from massive gains this week. Most are marginally in the red but the one that led the bull run is dumping double digits leading analysts to question its validity in the first place.

Since its FOMO driven surge to top $430, Bitcoin SV has crashed over 50% in a slide back to $290. It has already lost the fourth slot back to Bitcoin Cash which has largely held on to most of its recent gains. 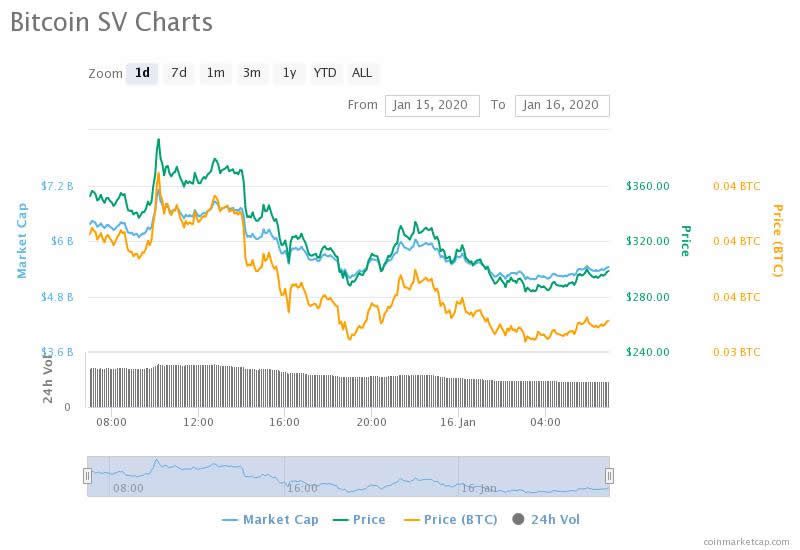 BSV is currently the worst performing altcoin in the top one hundred and the only one dumping double digits.

The pump was largely driven by speculators reacting to rumors that Craig Wright actually has access to a ‘Tulip Fund’ allegedly containing millions worth of bitcoin mined during the early days of the asset’s existence.

Dollar eyed day traders loaded up on BSV under the impression that Wright would sell whatever BTC he had in that stash for his own coin.

Crypto Youtuber Nicholas Merten delved into the data to reveal that actual volumes were extremely low and many obscure exchanges were used.

“Only $35.6M of volume is from exchanges open to US traders. The other 99.4% of daily volume is made up of mainly no-name exchanges and known wash trading exchanges that still deceive this space. They can basically dictate a false price.”

Wash trading is a type of market manipulation where sell and buy orders are simultaneously placed on the same asset. It is used to fake data from obscure crypto exchange platforms or to falsify the price of a coin, in this case, BSV.

Bitcoin SV is only listed on a few exchanges and most of those are highly dubious with low daily volumes such as Bibox, EXX, and Hotbit.

Crypto writer Dalmas Ngetich joined the digital dots adding that the BSV market cap was actually lower than its 24-hour volume at one stage.

So it seems that markets have been faked out again by ‘Faketoshi’ and his highly spurious spin-off of bitcoin.

Back to reality, the market correction has been expected but the sentiment is still bullish following gains of 25% this year for total crypto capitalization.

Was the Bitcoin SV pump totally manipulated? Add your comments below.