Bitcoin (BTC) is seeing a “reset” in investor behavior at $30,000 and the trend need only continue to spark a price rise.

According to on-chain monitoring resource Ecoinometrics on Tuesday, the only way is “up” for BTC/USD if hodlers continue accumulating coins.

Analyzing who bought coins since the start of the latest bull run in October 2020, Ecoinometrics showed that major change is afoot compared to last year.

At the start, it was smaller investors, or “small fish,” who were accumulating. This began when Bitcoin passed its previous all-time high of $20,000 and continued all the way up to the new peak of $64,500.

At $20,000, however, larger investors began selling, albeit not in sufficient quantities to end the bull run.

Whales, on the other hand, added selling pressure once BTC/USD hit $30,000 for the first time. The result, analysts say, was the tipping point at May’s highs.

“Apparently $30k is a key level that stopped the trend of coins accumulation by whales,” Ecoinometrics commented.

The reason that selling pressure ultimately took over could lie with whale sentiment that Bitcoin was gaining “too much, too soon” and that the market was thus deemed unsustainable.

Now that $30,000 has returned, cold feet are nowhere to be found — investors, both big and small, are buying again.

“Whales and small fish have started accumulating again while other categories have turned neutral,” the findings continue.

“If that interpretation is correct, then what we had with this correction is a reset. Would that trend of accumulation continue, there is only one direction Bitcoin can go and that’s up.” 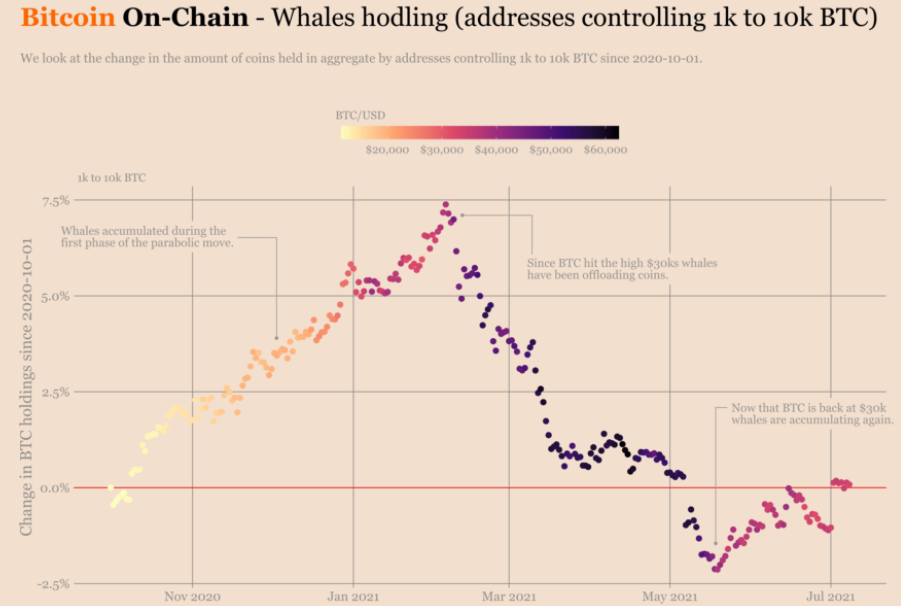 A glimmer of hopium

That perspective provides a refreshing counterargument to the bearish tone taken by many market commentators over the past few weeks.

Even the classic stock-to-flow price model has fielded concerns of invalidation, something its creator denies, while on-chain activity has been marked by low volumes and a lack of solid support above $30,000.

Calls for a major price move are not in short supply, meanwhile, with hopes for an upward move lingering despite sliding below $32,000 on Wednesday.