Bitcoin is starting to wake up after consolidating in a $500 range for the past five days. The leading cryptocurrency just minutes ago crossed above $10,500 for the first time in many days in a $100 candle that came on the back of liquidations.

According to Skew.com, a crypto derivatives tracker, around $6 million was liquidated during Bitcoin’s move higher. This was only for BitMEX’s BTC market, meaning millions more were likely liquidated.

Other markets, like those for Ethereum and other altcoins, also likely saw millions in liquidations as they moved higher.

What’s Next for BTC?

Analysts are optimistic about what comes next for Bitcoin.

One crypto trader shared the chart below, which shows the recent price action over the past few weeks. The trader’s proprietary indicator just formed a buy signal on the daily candle; this signal was last seen at the end of July, in the low-$9,000s. 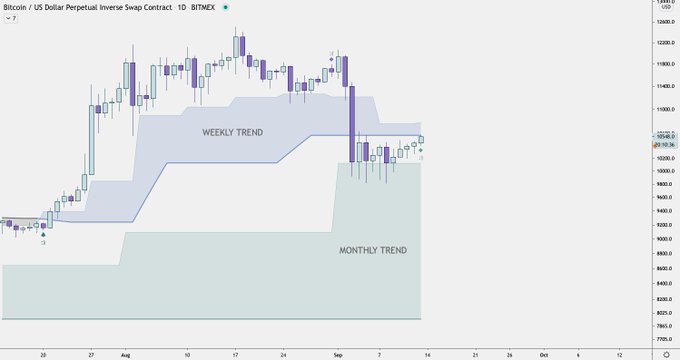 The chart also indicates that Bitcoin has cleanly bounced off a monthly trend level, which is bullish. It also shows that BTC is running up against a weekly trend, though, suggesting that bulls still have some work to do.

Another trader that predicted the ongoing retracement also suggested that there is little reason to short Bitcoin from here. He suggested that the coin could move “closer to $11,000,” which is where the next notable level of resistance lies.

14/09/2020 Business And Finance Comments Off on Bitcoin Breaks Above $10,500 as Bullish Recovery Continues: What Comes Next?
World News