Bitcoin rose Monday in a surprising rally that took its price up by almost $1,000 in less than 12 hours. 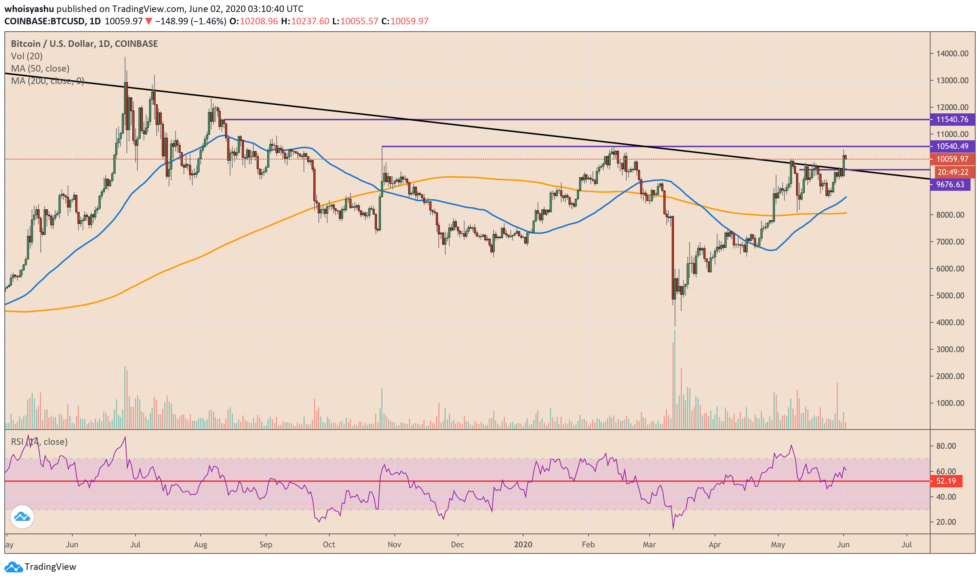 The benchmark cryptocurrency climbed 10.17 percent to $10,428 ahead of the UTC midnight close. The wild move uphill helped bitcoin break above crucial technical resistances defined by a long-term descending trendline and a $10,000 price level.

It further indicated traders’ likelihood of testing $11,000 in the coming weeks.

The moves in the bitcoin market took its cues from supportive macro fundamentals.

On Monday, the WSJ Dollar Index, which measures the greenback against 16 other currencies, plunged 0.57 percent to 92. Observers noted that investors sold the dollar to buy riskier currencies, a sentiment that may have fueled the bitcoin price rally above $10,000.

The index was trading at a new year-to-date high – near 97 – in March 2020. The month saw almost every risky asset falling to its record yearly lows amid a global market rout. The meltdown appeared as major economies entered a lockdown stage amid a fast-spreading virus pandemic.

Investors sold other assets, including Bitcoin, to seek safety in the US dollar.

But the situation is now flipping back towards normal. The number of infections and deaths caused by the virus dropped in the U.S. Europe, and China. It prompted governments to ease lockdown restrictions, leading to a modest rise in factory activity.

Chris Turner, the head of the Forex strategy at ING Bank, said the confidence is slowly returning into the market, which is prompting investors to short the dollar and move into riskier alternatives. The fiat homecoming, overall, is leaving Bitcoin in a healthier state.

Bitcoin’s tick above $10,000 also appeared against the backdrop of an escalating geopolitical rift between the U.S. and China.

Traders pinned their sentiments on Donald Trump’s repeated warnings to Beijing over their controversial Hong Kong security law. While the U.S. president is yet to take substantial action against the mainland, investors have already started weighing in the possibilities of yet another trade war.

The sentiment surfaced after China ordered its regional companies to temporarily stop the purchasing of U.S. farm products, including soybeans.

“If it is true China will buy [fewer] soybeans, it will increase the chances of escalation with the U.S.,” Seema Shah, chief strategist at Principal Global Investors, told WSJ.

Bitcoin tends to react positively against a trade war. The cryptocurrency rose by more than 200 percent against the one that started in 2019. Traders believe it would perform a similar upside stunt as worries over the new “cold war” between the U.S. and China rise.