When Bitcoin decoupled from Gold in November 2020, on-chain analysts predicted that it was gearing up to hit a new ATH on the charts. As it happened, that’s exactly what happened. However, the sentiment on the part of the market’s retail traders was mostly mixed after the Bitcoin-Gold correlation dropped so dramatically.

The “store of value” narrative led to the pre-bull run market rally in mid-2020, and the present price rally was a result of Bitcoin emerging as a store of value, not exactly digital cash. That is why its correlation with gold was so critical. Now, since both assets are rallying, it is obvious to draw parallels between the two. The next step is to analyze the rallies and find a point of shared commonality.

For gold, its biggest-ever 3-week liquidation event happened this year, with all the weak hands in the market cleaned out. In fact, nearly $25 billion went into EM equity, while much more than that went into US equity. All said and done, nearly $8 billion was pulled out of gold.

Now, a part of the said $8 billion went into BTC. However, BTC right now is not a big enough macro asset class, even though it might be on its way. Post the aforementioned decoupling and the shaking off of weak hands, Gold may be prepared for a sustained rally. Even Bitcoin’s price has sustained itself above and around $19,000 every day since hitting a new ATH.

What does this suggest? Well, this underlines the possibility of greater BTC -Gold correlation towards the end of 2020. Now, both assets are having a price rally, however, the question is – Are these rallies related? Why on-chain analysts are comparing the two assets after a massive drop in correlation is interesting. Since both have an ongoing price rally, drawing parallels seem to be the most obvious thing to do next.

Based on data from USDebtClock.org, the same narrative that was driving Bitcoin’s price up since June 2020 has been driving Gold’s price rally. 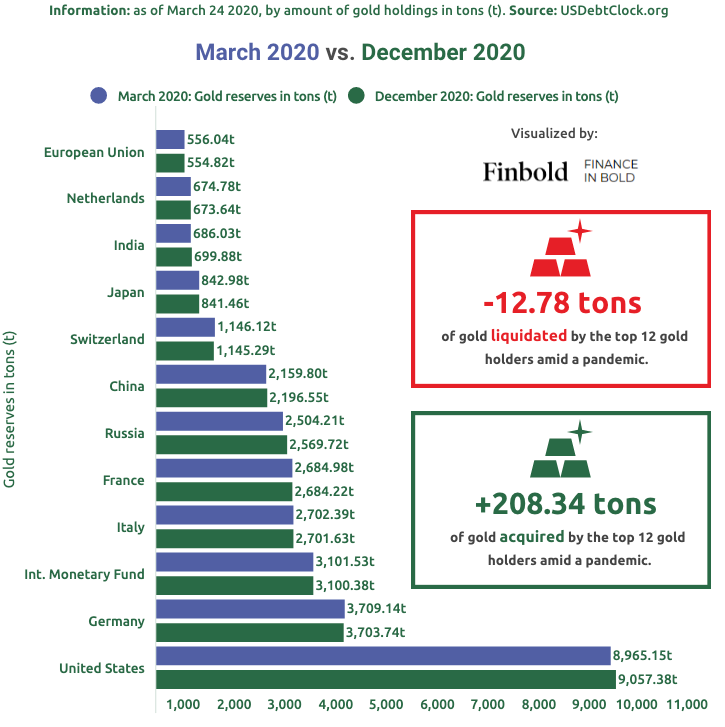 While consistent institutional buying has strengthened the demand for Bitcoin, the gold buying frenzy on the part of central banks all around the world has strengthened the demand for Gold. A correlation may or may not emerge between the two assets, but the two assets are on a similar path, with a difference in scale. The decoupling may possibly be undone in December of 2020 or early-2021, unless one of these assets stops rallying. Will that happen? Well, that’s a question that doesn’t have an answer yet.

07/12/2020 Bitcoin Comments Off on What’s next for Bitcoin and Gold’s correlation?
Markets