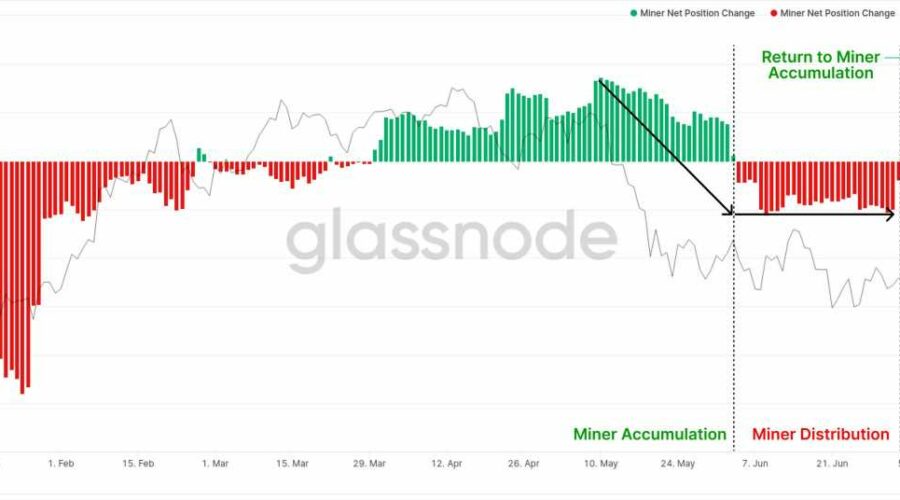 Miners have began accumulating bitcoin after a sell off during much of June according to blockchain analytics by Glassnode.

Bitcoin miners collectively sold about 5,000 BTC a day last month, worth $165 million a day. Now they’re net holding about 2,500 bitcoin a day as pictured above.

This is probably due to a near 50% drop in the algorithmic difficulty to find a block after China’s Communist Party (CCP) shutted down large scale miners.

For those that remain, mining a block now is as profitable as when price was at $64,000 because though price has halved, competition to find a block has more than halved too.

Thus the network as a whole has considerably less costs to keep bitcoin running. So miners are saving their coins instead of liquidating.

The hashrate as a whole is increasing however, up from a brief recent low of 58 exahashes a second to nearly 115 Ex/s.

That brief low was just before the difficulty adjustment, so it may have been a way for miners to try and artificially lower difficulty, with the more stable hashrate being at around 100 exahashes, considerably down from 180.

An increase in the hashrate would generally follow an increase in price or a closing of the gap between the cost to mine a bitcoin and its market value.

While that artificially created gap is closed, miners are gaining surplus value, and so are withdrawing supply in the market, affecting bitcoin’s price.

This complex dynamic leads to a balance of sorts between hash and price, with an increase in hash making bitcoin acquisition more difficult, and thus there may well be an increase in price.

That’s because putting up hashrate is effectively an indirect way of buying bitcoin from the network itself, rather than from a bitcoin holder.

That competition leads to a point where buying bitcoin directly is more profitable than mining it, or in situations where one wants to mine bitcoin for use rather than as a business, you get a fairly direct way of buying bitcoin by miner holders taking out profits from miner businesses which are net value extractors.

So while the mantra in this space is that hash follows price, this recent halving of both hash and price caused by a halving of hash forces one into a more sophisticated analysis and consideration of the relationship because there is a correlation, but not a simple causation.

Our hypothesis would be that China based miners had an inflated demand for bitcoin mining as a business due to cost advantages, and therefore they were a net cost extractor from both plain holders and mining holders.

However they raised the general cost of mining bitcoin and thus the cost of acquisition by utilizing the cost advantages they had.

But cost has to meet demand, and thus the only part of the equation they may have changed is a sudden increase in new supply because they no longer have the business and therefore do not need to engage in bitcoin account management. So being free to choose to simply liquidate it all.

That extractive element can best be seen in January when they were selling 20,000 bitcoin a day, and on some days even 25,000, worth nearly a billion dollars at the current price.

For a 30 day period during June-July they sold about 120,000 bitcoin, worth $4 billion, with that being a consistent new supply on the market at the scale of 5x 900 daily block rewards.

They can not save more than 900 bitcoin a day unless they’re directly buying, so the Glassnode accumulation statistics above need a disclaimer of blockchain data generally being informed guestimates.

But if the artificial fall in hash contributed to the fall in price because miners increased liquidation either to get out or to handle the costs of migration and the time period without revenue, then to some extent we have a temporary and an ‘artificial’ intervention in the supply and demand balance.

Some of this interference may have an actual effect in as far as the bitcoin network is now not utilizing the cost savings of China mining, and thus the cost increase of bitcoin acquisition through mining for the rest, but that may be a net benefit because bitcoin mining businesses would not be artificially extracting from potential bitcoin mining holders through energy subsidies.

Otherwise if demand was at $65,000 and we had an artificial temporary interference with it, then logically you’d think supply will eventually reflect demand, and so bitcoin’s price should rise to at least $65,000 plus or minus any potential gains or losses from the subsidized cost of mining.

But whether that’s indeed so remains to be seen as artificially or otherwise, its effects on sentiment may be real. However, if there is a relation between hash and price, then there was an artificial interference with one, so there was an artificial interference with the other, and since that was temporary, you’d expect the real balance between supply and demand to eventually impose itself.