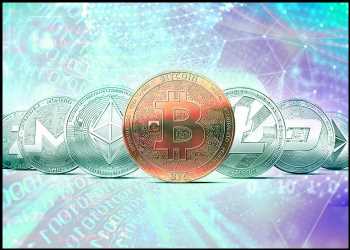 Crypto markets rallied brilliantly early on Monday as hopes of a pause by the Fed after rate hikes in June and July revived market sentiment. The Dollar’s weakness and the Dollar-Index slipping to a fresh one-month low of 101.35 helped Bitcoin breach the psychological $30k level, providing much-needed momentum to the wider crypto market. Overall crypto market capitalization increased close to 5 percent overnight to $1.27 trillion.

Market leader Bitcoin touched a high of $30,723 and low of $29,095 in the past 24 hours. It is currently trading at $30,655, up more than 5 percent on an overnight basis. Only 40 percent of BTC holders are making losses at current prices. It is trading in the green zone on a weekly basis as well and is the only crypto in the top 10 ten to do so.

Bitcoin has also regained the 10th spot among all assets according to market capitalization, published by companiesmarketcap.com. BTC’s market dominance also surged to 46 percent of the overall crypto market.

Leading alternate coin Ethereum gained close to 6 percent in the past 24 hours to trade at $1,901. However, it still down more than 8 percent on a weekly basis. ETH breached the $1900 level and ranged between a high of $1,909 and low of $1,787 in the past 24 hours. Only 38 percent of ETH holders are making losses at current prices.

Ethereum currently dominates 18.1 percent of the overall crypto market. ETH had suffered a beating in the previous week as a bug triggered concerns on the stability of the transition from Proof of Work to Proof of Stake mode, scheduled for August.

Tether (USDT) ranked third overall and first among stablecoins traded between $0.999 and $0.994 in the past 24 hours. 6 percent of USDT holders are making losses at current prices. The stablecoin was officially launched recently on the Polygon Network and with this, Tether is available on 11 blockchains including Ethereum, Solana, Avalanche, Algorand etc.

4th ranked USDCoin (USDC), ranked 2nd among all stablecoins traded between $0.9997 and $1.00 in the past 24 hours. 6 percent of USDC holders are making losses at current prices.

6th ranked XRP(XRP) has rallied more than 3.5 percent on an overnight basis. It is yet to recoup the 6 percent loss suffered in the past week.

8th ranked Cardano (ADA) jumped more than 12 percent overnight after it reached the milestone of having minted over 5 million NFTs. ADA traded between $0.4706 and $0.5241 in the past 24 hours. ADA is the topping the top-10 price charts on an overnight basis. ADA is however down 5 percent on a weekly basis.

10th ranked Dogecoin is lower 3 percent on a weekly basis despite the 4 percent gains made overnight. DOGE has gained ever since Doge champion Elon Musk said that SpaceX would soon be accepting payments in DOGE.