Despite a bearish and sideways market, cryptocurrency transactions seem to be on the verge of reaching the previous all-time high. As per the data obtained from Blockchain center, the total on-chain transactions for all cryptocurrencies exceeded 522.119 million and the total number of active users for these transactions add up to 1.357 million.

EOS has the most number of transactions as compared to any other cryptocurrencies, even exceeding that of Ethereum [ETH] and Tron [TRX]. The total transactions of EOS as of today is approximately 350.30 million. These transactions are coming from a total of 41,457 active addresses.

The transactions on EOS network peaked at 468.08 million in the second week of August 2018 and has since declined to 350 million. When compared to the big picture, EOS’ transactions are coming from a mere ~3% of the total active users. 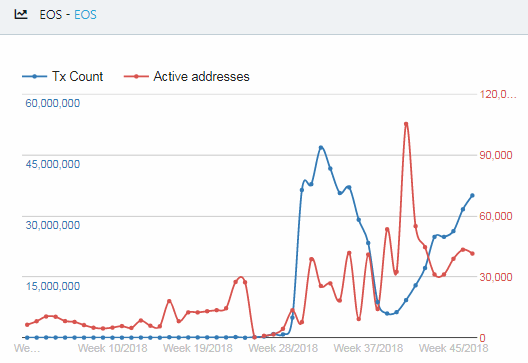 Tron follows EOS and has ~78.543 million transactions, which is the highest number of on-chain transactions that Tron blockchain has ever witnessed. As compared to EOS, the total number of active addresses for Tron are almost halved, i.e, 21,211. 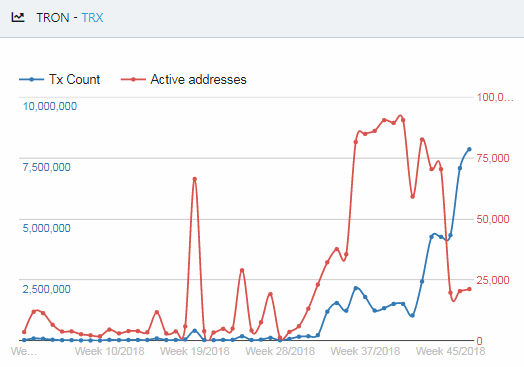 Bitcoin’s total transactions in the year 2018 peaked at 24.25 million in the second week of January 2018 and are currently hovering at 17.08 million, but Bitcoin’s total active addresses far exceed that of EOS’ or Tron’s, coming up to 681,779. 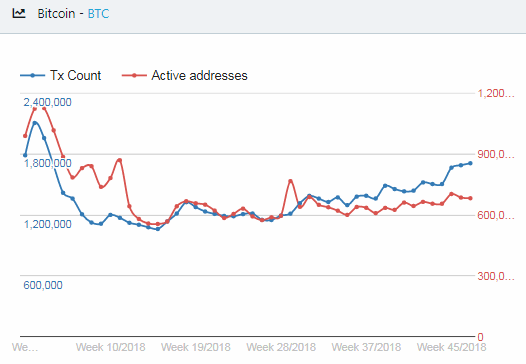 Ethereum has a total of 33.27 million transactions as of November 11, which is contributed by a total of 247,671 active addresses. Ethereum’s on-chain transactions peaked at 71.48 million in the second week of January 2018 and have since declined. 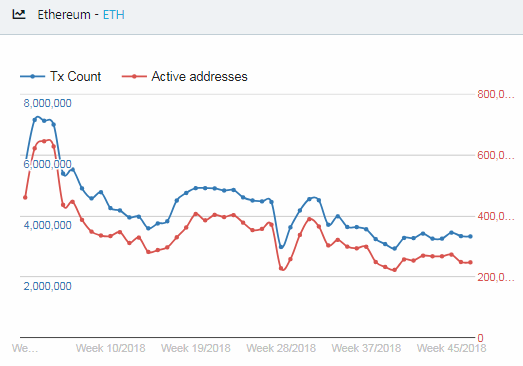 XRP’s transactions have come down to 17.99 million transactions, which are one-quarter of XRP’s peak number of transactions i.e., 72.05 million. The total active addresses as of today add up to 6,924. 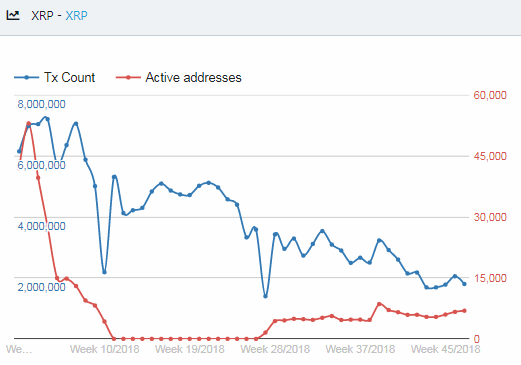 In conclusion, Tron and EOS together have about 4.5% of the total number of active addresses, while still contributing 82% of all the cryptocurrency transactions.

“If only 3% of active addresses is making that many transactions imagine when we hit 10% maybe 15% we will be blowing them out of the water for transactions per 24 hours and usage per user which is what we want, users using their coins/resources not just bag holding and watching the price drop.”