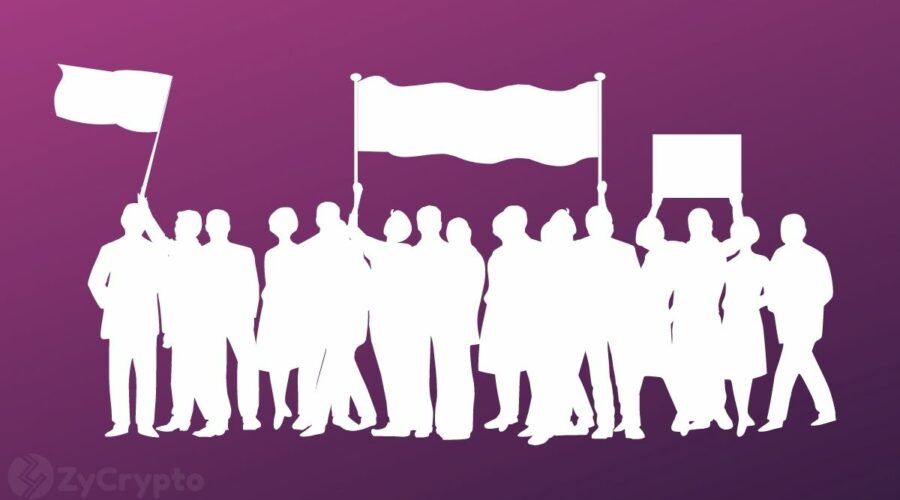 Multiple reports indicate that citizens of El Salvador have taken to the streets to protest against the Bitcoin Law which the government plans to implement by September 7.

According to a Reuters reporter on the ground, late last week in the capital of the country, San Salvador,  hundreds of Salvadorans – including workers, veterans, and pensioners – bearing signs saying “No to corrupt money laundering!” and “We don’t want bitcoin,” flooded the streets to express their displeasure with President Nayib Bukele’s plans to adopt Bitcoin as legal tender.

RedInformativa, a local news outlet, also indicated that the protest is part of a larger protest by war veterans of the country who are demanding about $333 million for the veterans’ institute in the country. The veterans also expressed a rejection of the implementation of Bitcoin as legal tender.

One of the labor union representatives told Reuters that the union was protesting because it fears that the government may decide to pay pensioners in Bitcoin. They are predicting a situation where their purchasing power can be affected by the volatility of the cryptocurrency.

“We know this coin fluctuates drastically. Its value changes from one second to another and we will have no control over it” the representative said.

Their fears are echoing the warning that critics of the move, including the IMF, have warned about. The IMF, who early on voiced concerns about the move, has recently restated that it considers the President’s determination to move ahead with the implementation of the law to be “inadvisable.”

The global organizations of which El Salvador is a member, in July, published a report where it explained that the risks of adopting digital assets as legal tender far outweigh the benefits. The article which was authored by two directors of the organization, Tobias Adrian and Rhoda Weeks-Brown, warned at length that the possible effects of the adoption of cryptocurrency by a  country could include macroeconomic instability, reduced government revenues, uncertain exchange rate in the international market, legal issues, and a weak monetary policy.

It also warned that domestic prices of goods and services could become highly unstable, financial integrity and compliance could also suffer, and added that banks and other financial institutions could be exposed to the high volatility in the cryptocurrency market.

However, the country’s government still seems to be advancing with the planned implementation. President Nayib Bukele has attributed the protests to being spearheaded by his opposition. The president is confident that the benefits the adoption of Bitcoin as legal tender will bring to the country will silence them.

For context, in a recent tweet, he points to the opposition he faced earlier in the year when the government introduced some new COVID-19 restrictions. He noted that those who opposed the move have themselves been keeping to it recently.

“So it will happen with Bitcoin and the Chivowallet” he says. In the meantime, the President is rolling out needed infrastructure for facilitating Bitcoin transactions.