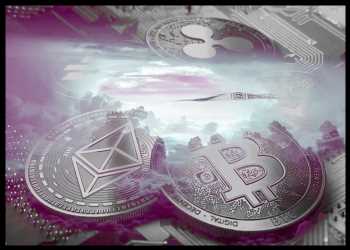 Cryptocurrencies bounced back in relief, after the latest Senate testimony by the Fed Chair Jerome Powell did not reveal any increased sense of urgency on the part of the Fed to combat inflation.

The Fed Chief stuck to what was already disclosed in the recently published FOMC minutes viz ending asset purchases in March, raising rates over the course of the year and perhaps allowing the balance sheet run-off by the later part of the year.

Global equity and commodity markets too rallied while the Dollar and bonds retreated. Gold, the competing inflation-hedge was a bit directionless. The euphoria is likely to be punctuated however, by the annual inflation numbers due Wednesday, that is expected to increase to 7.1 percent, from a multi-decade high of 6.8 percent recorded in November.

Resumption of almost 90 percent of the Bitcoin mining operations in Kazakhstan also added to the positive sentiment.

Aggregate crypto market capitalization has increased to $2.04 trillion, from $1.96 trillion a day ago. Stablecoins dominance or the relative share of crypto money parked in stablecoins dropped further to 8.18 percent from 8.42 percent a day ago as risk-taking re-emerged on the crypto marketplace.

BNB (BNB) improved to the third rank among all cryptocurrencies after gaining 4.99 percent overnight and is currently trading at $473.96.

Solana’s overnight gains of 4.98 percent helped it move one notch up to 5th rank. It is currently trading at $143.60.

Cryptocurrencies are getting merged into the financial mainstream with each passing day. The crypto price-stock price correlation too is becoming more evident with the passage of time. Developments impacting stocks apparently are impacting cryptocurrencies also more or less to the same extent. The co-movement and spill-overs could imply a lack of scope for risk diversification between the asset classes or in extreme cases imply a potential contagion from one asset class to the other. According to digital assets data provider Kaiko, Bitcoin’s correlation to Nasdaq and the S&P 500 has reached its highest level since July of 2020.

As the correlation between cryptos and other asset classes increase, there would be a lingering concern on the effect it would have on market movements across the financial assets landscape. Though the current level of regulatory interference on crypto space is rather limited, it is imminent that more jurisdictions would come forward to regulate the ambit of digital assets.

The transition to a tight monetary policy and a greater regulatory control could be the two most prominent influences on cryptos in the year ahead.